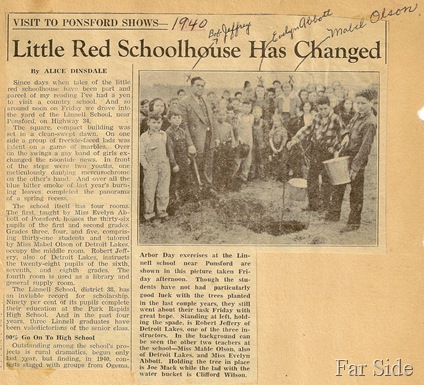 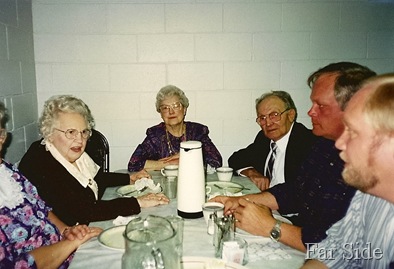 Far Guy's mother is a lovely lady. I think it is so wonderful that you are documenting these memories to pass along. Even without particular dates it is still special to keep them for the future. It keeps us rooted in knowing who we are and where we came from. Too often those memories are lost.

It's such a good idea to document these memories.
My mom passed away last July and I have thought of so many things that I wish I'd have talked to her about...lost memories...

I enjoyed reading the newspaper article. The reporter captured the scene clearly with his words and put me right in the middle of the school yard.

Yes, you are so fortunate to have access to all these memories, and to chronicle them for the coming generations. I always enjoy the Wistful Wednesday posts.

Great post, Connie. I wish my memory was as good, maybe that is why I am going back to school to work my brain!

What a wonderful story and loved seein' the pictures. It's great your documenting all this, I sure hope the 'youngens' appreciate it all someday.

God bless and have a terrific day sweetie!!! :o)

Great post and photos what wonderful memories to to document. Have a great day !

It's so neat that you can come up with these articles and then link them to another more recent picture.

It is a neat find and the group picture is so true. Funerals are about all we have anymore to see family, oh yes, I guess they don't even bother to come to funerals anymore either.

Wow - love the way the history from newspapers still lives on.

Why is it that those faces seem so familiar and so very very comforting? Even givin' the school marm "what for". I see them and I so miss my own mom. Mackarolly, I'm a grandma and I still miss my mom. Sumpin' fierce. Nobody told me I would still feel like a kid like that, needin' somebody to not even talk to, heck most likely to argue with, crap, I wish we hadn't done so much of that just dumb arguin' but I'd even take that today instead of this silence, nobody tol' me I'd feel like that when I was actually gettin' older.

I hope that tree survived - it would be a big 'un by now!

Sadly a search for "Linnell Country School" brings back a number of obituaries, Edna A. Conklin and Gladys Leona Wettels the more recent ones.