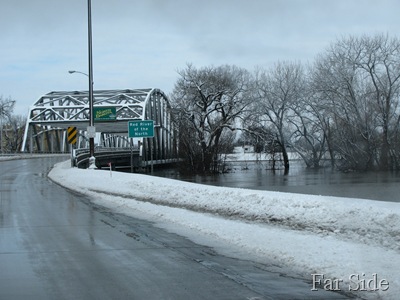 This is the Kennedy Bridge. 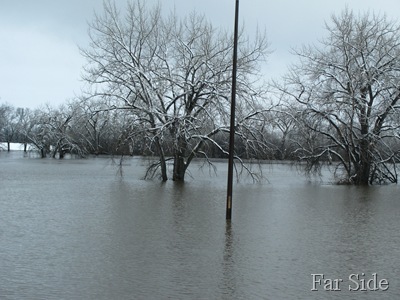 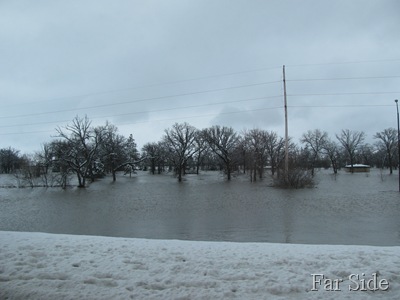 So far the river is staying within the dikes.

This is the first time I have been in town when the flood walls have been up. 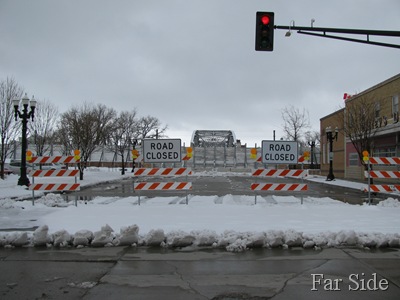 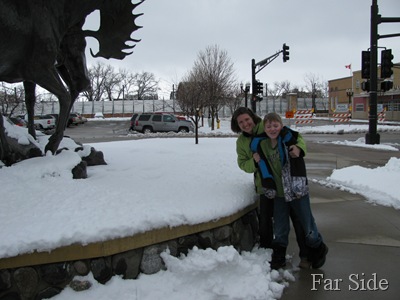 These are my shopping helpers.  Adam is learning to open doors for women and to sit patiently outside a dressing room and hold “Stuff” for his Grandma. Jen is a shopper..she goes up and down the aisles..grabbing stuff..saying “I don’t care if you don’t like this on the hanger..you are trying it on.”  I had given her the mental list I had, a summer dress, a sweater or two and a couple of tops and a pair or two of new shoes.  Mission accomplished..Cabela’s even had a pair of brown crocs for me.

We met up with Noah, Andrew and Far Guy for lunch.  Noah took a Gun Safety Class and they all went to the indoor shooting range at the Police Station for the final tests which were a written test, a oral test and a shooting test. Noah passed with flying colors!  Hard for me to imagine that Noah and his friends are all old enough to hunt now..but they are and they have taken the Firearms class so they should be safe hunters.

We came home late in the afternoon..of course it had snowed at our house too:( 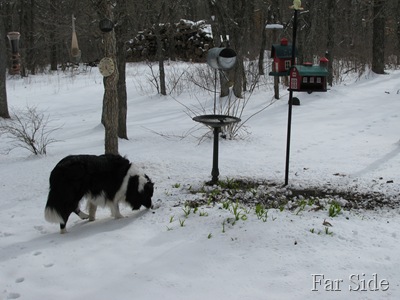 Do you like crocs? My oldest swore by them but I've been afraid to try them because of my high arches.
Doctor recommended New Balance a long time ago and so I don't wear much else.
That much water is just scary. Hope the flood walls continue to hold!
Congratulations to Noah on passing his Gun Safety class!

I wear crocs as slippers, and if I need to dash outside suddenly I can do that without having to look for other shoes. My daughter worked for a podiatrist and he said they were terrible things:(

That is one lot of water, I hope it goes nowhere but down, (as in gets less).
And snow, well there is nothing good to be said about that at this time of the year:( Hope it melts quickly.

I wear something like crocks but they dont have all the holes in them they are more like a gardening clog, I love them they are comfy and and I can just slip them on to go outside.
Your shopping trip sounded like you had fun thats great. WOW soo much water. We have been having a mix of everything today, but the graound is so warm no snow stayed thankfully. Have a good day !

I love my Crocs and my Croc-knock-offs! My summer barn shoes are croc-knock-offs that I bought at WalMart 3 years ago for $1.00. I want more. They are a heavier plastic so if a horse steps on my toes, I'd be OK. Sadly, they are wearing out.
(LindaG - I have extremely high arches and Crocs are fine!)
The flooded river is awesome.

I wear crocs all year around the house....Love your blog

I wear crocs in the house, too. Sometimes I wear them out when I don't feel like putting on other shoes, they are so comfy. That water is amazing! Plus I'm really tired of snow, probably not as much as you are, though.

My youngest son went to NDSU and was piling up sandbags during the Great Flood. I could never figure out where the Red River Valley was when up that way as all you can see is flat....

Oh gosh - that is a lot of water! Hope the flooding doesn't get any worse.

I agree that water is scary! I just looked on the map to see where you are. I didn't realize you were almost in Canada!!! No wonder your snow won't quit.
So it sounds like your work wardrobe is shaping up. It will be time to punch the clock before you know it. Hopefully there will still be a bit of time at least once a week to update us.

Flooding, snow and cold weather are all disgusting. I hope we see the end of it all soon.

Ya'll just have it all goin' on, don't ya??? We've had so much rain it's henderin' gettin' all the fields in crops.

Your shoppers are dolls! :o)

Have a wonderful day.