Thirty-one years ago tomorrow my first nephew, Josh was born. I was so excited to be an Aunt for the very first time. He still calls me Auntie and freely gives hugs, he lives next door. 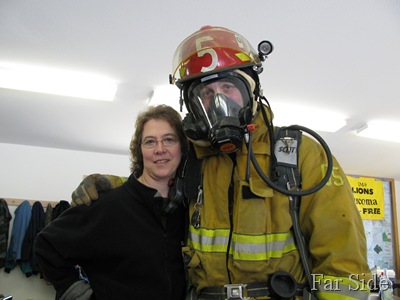 “She who sees robins first” and Josh
It was “she who sees robins” birthday yesterday..I won’t divulge how old she is..but she was nineteen when she birthed Josh.  I took this photo earlier in the month at an open house at Station Number Two..Josh was walking around talking to little kids..showing them what a fireman looks and sounds like in an self-contained breathing apparatus. He did scare a few children.  Small children have been known to hide from firemen during a fire, because they were afraid..and firemen look and sound scary. 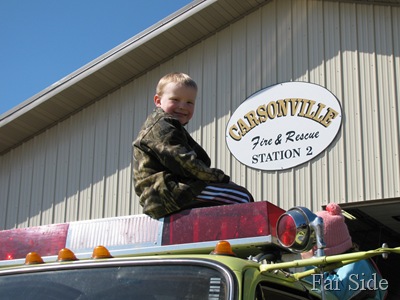 I snagged this photo of Mason( Josh's son) that day too..it was one day after he turned six.  He invited us to his birthday party.  I asked him what he would like for a gift..truly a gentleman he replied “I will like what ever you pick out.”  I asked again and he replied “A Transformers Movie” ..well ok what if I cannot find it what other movies would he like..Horses..no..Dogs ..yes. We found a Transformers Movie and just for good measure Where The Red Fern Grows one of my favorites.  The best present he got at his party was a giant gallon jar of pickles..he was just thrilled! He kept all of his requests straight and never asked for the same gift twice..impressive for a six year old. He got some water guns that Far Guy and I were both coveting..super blasters…we were both thinking what a fun thing to use with Chance!

I am not sure if I reminded you to change the batteries in your smoke alarm when we went to daylight saving time.  If you didn’t replace them..put it on your list of things to do.  I made Far Guy do it..he would like to eek out every little bit of juice from a battery and wait for the smoke alarm to start going beep-beep..not me..replace them:)

Good advice about the batteries. Too many people forget them. Happy Birthday to your fireman nephew. It seems a lot of your family is involved with volunteering. That is so excellent.
Mason is a real cutie. A jar of pickles - I like his choice. One year I got me a big jar of pickles for my birthday too.

Happy Birthday to your nephew and what a cutie Mason is - pickles??!! I love them too!

Thanks for the reminder about the batteries.

Thanks for the reminder. I'm the same way. ;)

We did our batteries when it changed daylight savings back in March but good advice though ! Great photos.
Happy Birthday to your nephew! Mason looks like he is having fun up there ! Have a great day !

What a little sweetheart that Mason is...and a gentleman too!!! He must really love pickles!!!

Kudos to all those great firemen who lay their lives on the line. I do change my batteries when I change my clocks. It just works for this feeble mind of mine.

God bless and have a super day sweetie!

Handsome guys in your family. It is so nice to know we have so many volunteers and first responders to help when the unthinkable happens. My heart goes out to those in the path of disasters.

Pyro..You are correct..I guess my calendar is all messed up..at least I didn't miss it! :)

Mason is adorable and sounds as sweet as his dad. His birthday presents story is funny. You are right he is quite clever to ask for different stuff from everyone - - and not get it mixed up.

What a cutie - and a gentleman!

31 plus 19 equals hummmmm. He sounds like a great nephew. Mine all live in Arizona, Ohio or California