She Who Sees Robins First is my sister in law, she is married to my other baby brother and they live next door.  She always sees Robins before me…always.

I am kind of a nut about dates..Phenology..keeping track of the the date each year something occurs. 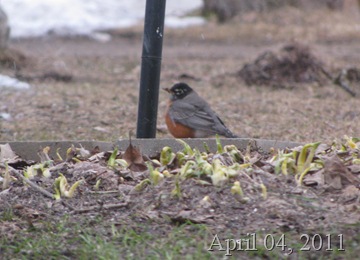 I took a photo out the window.  This one was eating something..the line that carries the hot water from the outdoor wood furnace to the house runs through here..the Daylilies are peeking their noses up and perhaps there are a few worms stirring.  This Robin spent a long time poking around in the yard.

So I am foiled again..maybe next year I will see them first…I don’t have such a good track record..in fact I have no win record. Before I started keeping track of the exact dates..she would stop by and report a sighting well before I ever saw one. 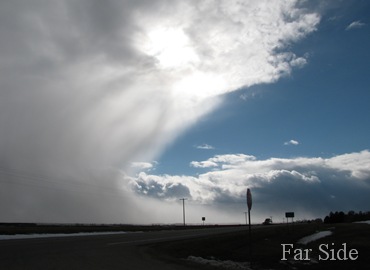 Yesterday this cloud was full of snow..it was snowing and the sun was shining at the same time. Great big huge flakes. 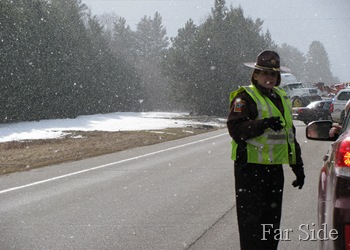 We came along this accident right after it happened yesterday..the truck driver was out and moving around just fine.  It was very windy and his semi left the road went into the ditch and drove over an approach..it must have been a wild ride.  On our way back home the traffic was stopped while a wrecker was maneuvering the semi out of the ditch..you can see it over the Troopers shoulder.  We turned around and took an alternate route.  We were a little closer..but Far Guy didn’t take any photos.

Now to answer your question..Does Far Guy read my blog?  Most days he does, then I will write something that pisses him off and he will boycott me for awhile.  I have explained to him about “Free Speech” and he agrees..he also agrees that just because I write something ..he does not have to read it. I do not hold him hostage and force him to read it.   The opinions expressed on this blog are mine and only mine..and Far Guy does not always agree with me.  Sometimes he will say “Stop writing about me.”  So I do for awhile till he gets cooled off and I get out of the dog house.  I do use restraint most days..now if it was “the pooping “ comment that made you wonder..well everyone poops.. some people just take their pooping more serious than others:)

BAHAHAH! I love seeing your snow going. Not coming in with a huge wind storm, but melting off the ground. Robins are always the bringer of spring.

So I'm interested to know if Far Guy has read yesterday's post and if he made any comments:)
Spring is on it's way, well sometime before December anyway! Lot's of robins here, 'singing' away.
I'd love to send you some of our rain to wash the snow away.

Connie you are so funny. I had to read yesterday's post to get it but I did. I'm sure they've been to my feeders. Connie we all have to take our pooping serious or else we'd all be full of crap. Hope you are Far Guy have a good day. Are you excited about your new job?

Hi! I lurk by your blog almost every day and enjoy reading your posts. I like everything border collie and get a kick out of seeing what Chance is up to. Your weather is very similar to ours. We still have a little snow and the robins just arrived. I get a little jealous when I read posts about flowering fruit trees and tulips, but I feel a real solidarity and kinship with MN bloggers. Keep on posting!

That cloud photo is so unusual. I like it.
Our wind was really strong here too - more like March windy weather than April.
That is funny about Far Guy boycotting your blog when he gets upset with what you write. At least he reads it most of the time. In the two years I've had my blog, my husband nor anyone else in my family has ever been interested enough to read mine.

My husband reads every post I write on both blogs, so I am careful not to mention him in any way that might raise his hackles. So not worth it! I also laughed about yesterday's post, and you're right: everybody poops, so what is unusual about what you wrote? Just that you did, is all! I loved it!

Are you sure she doesn't fib just to mess with you?

Karen..Nope he didn't have even one comment for me after he read it.:)
Becca..I am getting organized..so not too excited yet:)
Rae.. They are missing out on some really good reading:(
Jeanne..no she is way to honest to fib:)

We have the "who gets the garden in first" competition around here. I saw the first Robin around here but that doesn't count.

My Dear Connie~ The POOP POST was the funniest EVERRRRRRR!!! :-) We must all remember:

"IT ALL COMES OUT IN THE END"!

Love it when adorable CHANCE gets to do his
Blogisphere too!

And I am excited for you about your new job.
That will be quite a change in lifestyle for you. And Chance will truly miss you..he told me!

The cloud picture is so unusual...glad no one was hurt in the accident.

HAHAHA love the post, but the ending no pun intended there lol was great.
My mum and I used to have a little competion going every year as to whom will see or hear the Robin first as they are both our favorites, but she isnt here now so I still do it in her memory.
Awesome photos and post. Have a great day !

That huge snow cloud photo is wondrous! Although I do hope that the snow has now melted... time for spring, I think!

I'm glad the driver of the semi was not hurt.

Bummer again on the snow. That is crazy. You might as well live in Alaska.
About the robins - - - plan a vacation south of you the week before you normally see them. You will beat her first sighting.
Tell Far Guy it is an honor that his life spills over into your writing. He is so much a part of your every waking hour that it is only natural to include him in updates. Plus, how many other men does he know that have so many women interested in what happens with him?

I'm smiling as I just commented on the poop on the previous post. maybe on the days he's upset we should call him 'poor guy' ... in sympathy