Yesterday it was well over fifty degrees and the snow around the snow stick began to melt some more.   The snow was still there at 3PM when we got back from my appointment at the Vet. 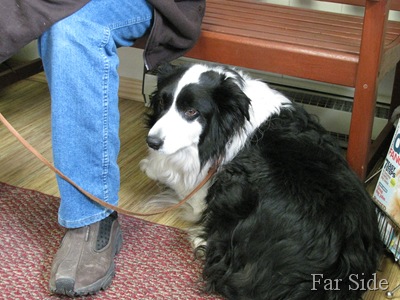 This is me waiting patiently for my turn.  At one point I was under this bench..a big fat chocolate lab was going to lick me to death. Then I came out and made friends with a boxer..he was very friendly, minus the licking.   Finally Patty came out and said “It is your turn Chance, come on back.”   I tried to hide behind Far Side..I headed for the door..the outside door.  They made me go in.

The scale ..the dreaded scale..I know that I have been suckering an extra treat out of Far Guy every once in awhile.   I weigh ten pounds more than I did last year at this time..I weigh 62 pounds.  Someone said the F word.. FAT..but I think I am just pleasantly plump.

I got my shots, and I had my blood test.  Far Side was fearing the worst..that I had one of those terrible tick borne diseases again this year.  Last year in the spring I had Anaplasmosis..darn ticks and darn deer.  I took my medicine and recovered completely.  The Vet (Gretchen) said  she was pleased..I am negative for all the tick diseases and for heart worms.  It seems that every other dog that comes through her door has a positive test..so I was the every or the other..and am negative!!

After supper..Far Side cooked..sometimes when she cooks she says “Ooops ..dropped something on the floor.”  I rush over and help her out..in this case it was some tasty roast pork..funny thing too..she dropped several pieces. Anyways..after supper we went to look at the snow stick. 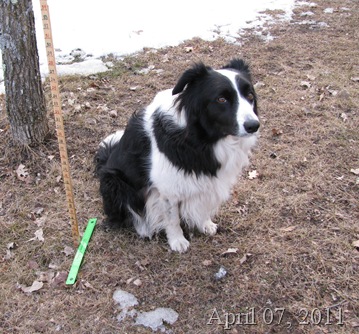 Gone..the snow is all gone from the snow stick..and we have two winners.  Connie Peterson and Liz in PA!!  Connie,  Far Side needs your address please email her. Liz we have your address!  Thanks to everyone that entered..it was great fun, well not quite as much fun as playing ball..but still fun:)

Congratulations to the winners! Aren't you glad to see the snow gone?

Great news, Chance. I think someone else was glad, dropping all food!

We all hate the dreaded scale at the doctor visit. You'll get your fine figure back when the grass is green and there are birds and bunnies to chase.

Boy, Chance, the same thing happened to ME at the doctor's this January. Exactly ten pounds. Now I am a little bigger than you, so it didn't show quite as much. Congratulations on being negative, how often can you say that? And congratulations to Connie and Liz!

Fun! Congratulations to the winners. What do you do if you get more snow? Ha.

Duke had that dreaded talk from the vet recently! Jim had to put the bones (he has a stash out in the shop) out of reach because Duke figured out how to twist the lid off with his nose. It was a free-for-all for awhile...and there was a little bit more of Duke before a kabosh was put to it!

Yay for spring! Have a great weekend! :)

Congrats to the winners! Wow, when this contest was started, way back in Feb. I think, I would never have guessed that it would have taken this long for the snow stick to be naked.
Uh oh Chance, something's gotta go. Either the treats have gotta be trimmed back, or the meals to counteract the extra treats, or maybe both.
I'm no good at controlling what I put in my own mouth, but somehow manage to keep the dogs at a very trim weight, even though they get lots of 'treats' out of the kitchen. It I didn't, I'd have my agility friends giving me a hard time.
Congrats on the 'negative' part though:)

Great job checking that snow stick Chance! Gotta take Odda and Hooch in to see the girls at the Vets office one of these days too. So far, they don't mind the scale, but I'm with you! Don't like the see the damage that the scale says!

Great for the winners and you, Chance.

Congratulations to the winners and Chance, I am glad your vet visit went well.

Hurray for no snow!

You look handsome, but carrying too much weight isn't good for a dog...

About time you got rid of that snow...congratulations to you and the winners...

Chance - - - You are not the only dog who goes for the outside door when your name is called. It is what most of your friends do.
Hmmmm --- on the weight --- did you know Mildred feeds her dog, Harriett, green beans for a snack to help avoid too many high calorie tidbits during the day? That is the first time I have heard about that. Don't know if those generic no-sodium veggies would interest you but I just read that about sweet Harriett this week. I would think you would be basically unlimited in the number you could consume each day.

C'mon Chance..you know you're going to have to pay the price when you go suckering your humans out of extra treats and even cleaning up after Farside ;) Congrats to the winners....I'd have never believed it was going to take THIS long;)

Thank you Connie & Chance!
I am so surprised to be a winner along with
Connie Peterson of the SNOW BE GONE GUESS!!!
....And thank you to all you sweet commenters for the Congrats!

We still have piles of snow/ice in parking lots in town from where the snowplows pushed it.
Also still have snow on the high side of road ditches (usually the south side) where the sun doesn't shine much.

But a breath of Spring is I have (1)one lavender crocus blooming and lots more ready to bloom.........and my daffodils have huge buds just ready for more sunshine and heat! Me too -
I will BLOOM when we get HEAT!! :-)

Again thanks! And Chance Carrots are great treat! Healthy too!

Hugs to all:
Liz in PA

Chance, I am happy you got a good report from the Vet. Harriet hides and shakes when we take her to the vet. Even the cats at the vet are bigger than her!

Congrats to the winners! Happy Spring you guys!

Ya hoooooo! No more snow for you! MMMM roast pork, lucky dog, sure you weren't bumpin' her tail makin' her drop more?

"with your tail" is how that's supposed to read. Pain killers interfere with typin'

Woo HOOO! I really was right!!! I will have to tell my friend here in Rapid City (visiting my mother) that I was RIGHT!!!!

And welcome, Spring ... we had a thunderstp\orm and rain today! And 75º yesterday here in Rapid City.

I bet you are beyond relieved to see the snow dissapearing!

Chance - you are a big marshmellow! But them, I like having Lab's lick me like crazy LOL!

Hey Chance. No snow to roll in too bad. I got to go swimming yesterday as the ice on the pond was finally gone. I bet you still got ice though. :)
Baron

Hey Chance your weight sounds normal. I know that Barnabas jumps in weight in the winter but he can drop four or five pounds with all the extra exercise. When we first go Barnie he was so thin and underfed that when we took him to the vet the next time she had a fit. She really didn't know what the weight was suppose to be but jumping to 55 pounds from the skinny dog that he was really made her scold us.

So happy for you that I didn't win! Goodbye snow!

Chance you'll be slim and trim in no time with summer on the way. Those winter pounds will drop as soon as you are able to able to go swimming again. Too bad you had to deal with that chocolate lab - yep, they are like that trying to lick and kiss you all over. I'm glad to hear you got a clean bill of health.