My Mother was Lutheran..so was my Father..Lutheran works for me.  Far Guy is Lutheran too..we went to the same church ( My family joined that church after I was confirmed..It might have been my vast knowledge of all things religion that convinced them that perhaps they should go to a church in town versus a small country church.)  Anyways Far Guy and I were married at that church and had our children baptized there and I suppose they will have to have our funeral someday too.  Far Guy’s Mother was raised Baptist..his Father..kinda Lutheran. 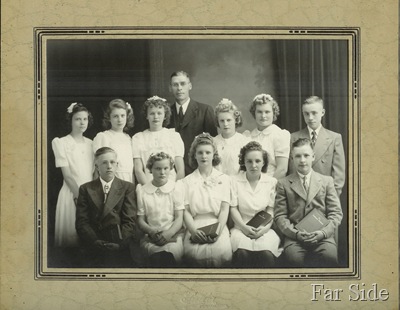 This is a photo of my Mothers Confirmation Class in 1944.  She was 15 years old that year. (Mom is in the back row, she is girl number four from the left.)

Confirmation always used to take place in the spring..a time of renewal and rebirth..when all things that look dead or dying after a long winter suddenly spring to life and blossom.

My Mother is a much better Lutheran than I am..she can still recite the entire Catechism in German..she can probably recite her Bible Verse too.  Every confirmand was given one.

I have no idea what my Bible Verse was..I was confirmed in 1966..in the spring and I cannot recite the entire Catechism…but I could give you a run for your money if you needed to find out exactly how many words could be formed from the words “The Lutheran Hymnal”..because that is what I did for two years during confirmation classes on Saturday mornings..that and daydream and catch a few cat naps. Hey I put in my time..God will count it..I am sure of it, you see the one little word that I couldn’t spell with all the little letters was the most important word I learned in confirmation classes  ..Grace :)