In 1884 my Great Grandfather was Confirmed. 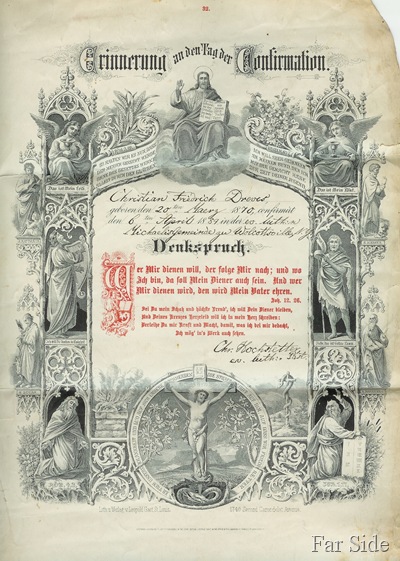 This beautiful old document is dated April 06, 1884 in Walcottsville, NY.  My Great Grandpa was born in Germany on March 20, 1870 his birth name was Christian Higher.  He did not stay with his birth parents.  He became part of the Drewes family sometime before 1884, from then on he was known as Christian Friedrich Drewes. Was he adopted or just taken in..I am not sure.

He came from Germany when he was twelve years old (1882).  He told my Mother that he was on a ship for a really long time and he saw lots of rats.

I always knew he was in New York for awhile..I always assumed he must have been in New York City or that area.  What a surprise for me to find out that on his Confirmation Certificate it says Walcottsville, NY which is near Buffalo NY.

He was a logger and also worked in the CCC camps. He was crippled with rheumatoid arthritis. 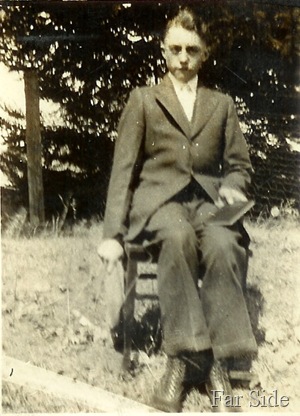 He used a chair with wheels on it to scoot around. He died before I was born. I do know that my Great Grandmother was devoted to him, she took care of his every need for many years. 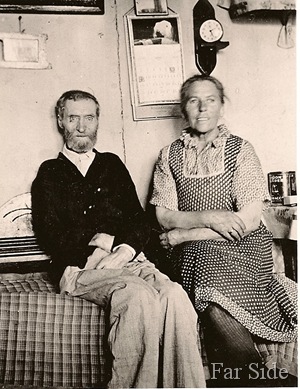 This photo was taken in April of 1944 more than likely Easter Sunday April 09, 1944.  I looked really closely at the calendar.. I couldn’t figure out the photo on the calendar for the longest time..it is an Empty Tomb.. and the Good Friday and Easter Sunday are highlighted.  Oh ya it was almost 2:30 in the afternoon. This is one of the very few photos of my Great Grandparents Drewes together:)

What a great picture of a happy couple. It reminds me that you don't need perfect health to be happy, but a partner in life to share it with. Thanks for sharing this.

Amazing story, Far Side. What wonderful history to have.

Great story, and wonderful to have that very old document.
There seemed to be some giving away of children way back then. My mother-in-law (101) would talk about the odd one or two she knew of.

Oh WOW! What wonderful photos and a to have that document awesome. Wonderful post , have a great day !

Love to hear of the people that made this land our land. Great history

What a journey he had. Now I want to know more about her. What a strong woman she must have been too.

You are so fortunate to have this picture. It's a gem.

WoW, what a wonderful story and pictures of the heritage of your family!

That old document is really somethin' else!

Your Great Grandma was quite the beauty.

God bless and have a super day!

Wow - this is just fascinating! What a find that beautiful document is.

I love the old pictures, and the family history, that you share with us.

I konnen nicht Deautsch sprechen. Well actually I have a similar wedding picture of my great grandfather, who with his wife, two sons and daughter followed my grandfather to America in the early 1970's. Unfortunately he (a Lutheran minister) didn't make it and was "burdied at sea." Still the rest of the family did make it and were all reunited in the future Woodbury, MN where they bought land and built a still existing farmhouse lost of among the malls and tract of St. Pauls suburbia. :)

It is an amazing story. My relatives that age were leaving because of the draft. There destiny of being killed in a war was evident and many boys came over here. We framed a couple of documents like that. They are amazing to look at with all the detailed decoration.