Yesterday Chance went to the spa for the day..well not the whole day because Far Guy would miss him too much ..he was only allowed to be there six hours.  He was waiting for us at the gate..as if to say “Get me out of here.”

For some reason Chance is mad at me.  I suppose he heard me saying “Lets get Chance a good trim, before mud season is in full swing and before the ticks are out.” 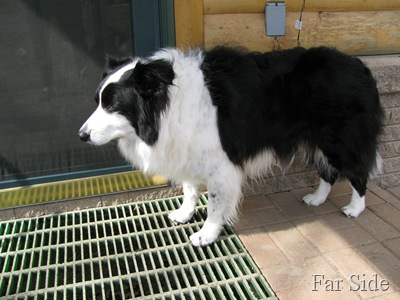 He wouldn’t even pose for a photo..I must be in the dog house.(what a turd)  His white is just brilliant!! Look at those feet..they are perfectly trimmed! ( less sand to drag into the house)

The last two times he was groomed he got tiny little sores, I think he was allergic to their soap or their cologne.  Far Guy is checking Chance every five minutes to make sure he catches any spots right away.  They used a special soap this time, so hopefully there will be no itchy spots. IF Chance has any itchy spots I will be in the dog house big time.

The ticks are out now.

Last evening I found two ticks crawling on Chance..both were the tiny little ticks..he will get a dose of Frontline today. There is no alternative. I wish there was…we live in one of the worst areas for ticks and tick borne diseases.

Ticks are just a fact of life in Minnesota in the spring..one of those spring signs that you can count on year after year.

This week the Juncos and Finches showed up on April 04, 2011.  The Purple Finches were hot on their heels a few days later.  We saw the first Red Winged Blackbirds on April 08, 2011. 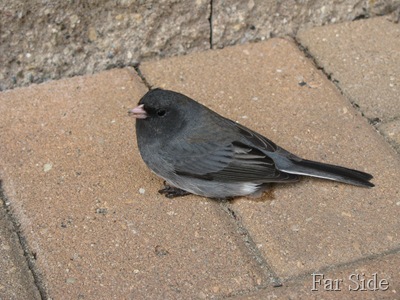 This Junco hit the window and sat around on the patio for awhile..he eventually flew off.  I hope he lived. The Juncos will be here for just a few weeks..then they will go further North. 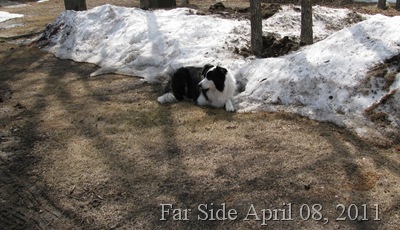 We still have snow banks in the yard..it is supposed to start raining..things will green up fast if it rains:)

Labels: Chance is so handsome, Spring in Minnesota

Yes, Frontline is a necessity with neighbor dogs of many next door. The ticks are not bad, but one year they were. Chance looks real handsome all cleaned up for summer. Yep, he doesn't like you anymore. You inflict him with things he doesn't want to do. We know the perfume he would prefer to wear.

We have a cat that does the same as Chance when annoyed at us. It's either 'speak to the shoulder' or 'speak to the butt', but she won't acknowledge us.

Funny how we know just what they're thinking. ;)

May is the huge wood tick month on the prairies here but I had a deer tick on me last week. Those guys make me real nervous because of the lyme disease connection

I have a cat like that. She wants to be right by us, but not to be touched.

I have heard that a vinegar/water rinse helps with the shampoo itching. Next time Chance goes to his 'stylist' bring some vinegar and ask her to rinse him one more time. Good luck with the ticks. I need to Frontline Rufus before we go north next weekend.

Chance may be upset with you but he sure looks handsome!
Have a wonderful day!

I think I remember when he was trimmed last year. Didn't you go a lot shorter with his hair? I know what you mean about the Frontline. I hate it, too but there is not a better solution that I know about.

We still have a few juncos hanging around, but I suspect this warm weekend will send them northward. Haven't seen many new species yet, but we're hopeful.

You are right, Chance's white is glowing. Ticks are so dangerous that you are smart to apply the flea and tick treatment.

Chance is so very handsome. *sigh* If only he lived closer!

What do you and Far Guy do about the ticks? Do they ever get on you? We don't have ticks, we are lucky.

Ticks...I am still wondering what their purpose is in the grand scheme of things.

You can take ME to the spa anytime. I need to give my dogs the "spa" day too....less mud for me.

Chance you look wonderful darling !
Miggy had her spa day on Fri whilst she was at the vets for the week and she is now home. Ticks/fleas arent evident here till May but rest assured Miggy will have her revoloution monthly for them and her heart worm pill monthly to keep her safe from mosquito bites. Love your header photos so fresh looking. Have a great day !

Chance is made at you? Just because you told him something he didn't want to hear, I guess. He does look sparkling white, doesn't he? Dogs are people too, you know. :-)

A day at the spa sounds heavenly - but lots of dogs don't enjoy it. I trim Oscar's paws and underbelly myself and he looks very sorry for himself.

Lovely spring pictures - good to see some mud and birds instead of snow.

A bath at the spa seems a bit of a waste heading into mud season! But that white is certainly blinding, for the moment anyway:)
Our dogs have no idea what a doggy spa is, and would prefer it stayed that way
Thankfully ticks and fleas aren't a big issue here.
We have Juncos too, but they look different to yours. There was a red wing blackbird singing away the other morning, and it was lovely to hear.

Chance is looking extra handsome after his day at the spa, but yes he looks a little peeved. Him and Riley both were a couple of grumps after their grooming episodes.