I have just a few photos of me with my paternal grandparents. 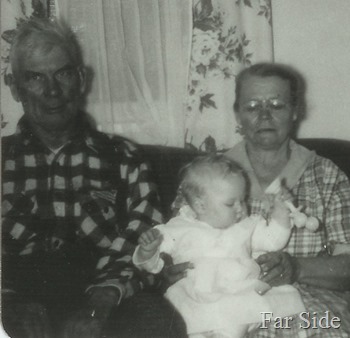 Grandpa Y, me and Grandma Y 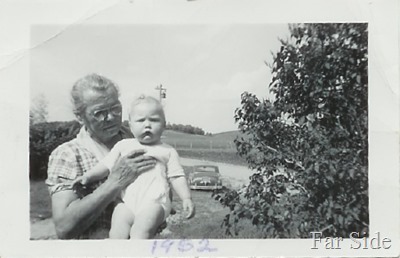 Grandma Y and me.

I was a bit of a chunk..or is that just the look of a healthy baby?  I wonder what the occasion was?  It was the summer of 1952..I would be one year old in the Fall.  I am pretty sure this photo was taken at my Grandparents farm..there was a bunch of bushes most likely some Lilacs half way up the hill to the house that was a stopping off place for a photograph.  I think someone else took the photo..it is a different size photograph than the ones my Mother took with her little Brownie Camera.

Grandma’s favorite flower was a Hollyhock..either that or it became her favorite after it grew effortlessly near her house:) 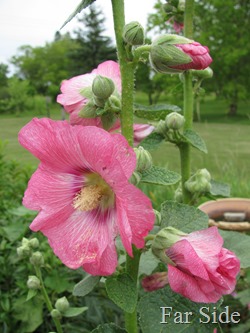 Oh how adorable! Stopping by via Muddy Boots Dreams, I'm also past the big 50!

My grandmother's favorite flower were Hollyhocks too! Did you ever make dolls out of the flowers?

There was a love of Hollyhocks in that generation...and still is. I guess one plus was the seeds were easy to share and they did reseed themselves.

This is my first year to plant Hollyhocks....and would you believe, here in Texas, they are already about 3 inches tall. I love hollyhocks!

What a chuck indeed! And a sour face as well, Far Side. You make me smile at the pretty hollyhock, reminding me that summer will bring them back around here, too. I love them as well.

In those days that was a healthy happy baby! What is with Grandpa's and their crazy hair? LOL I have a few of my Grandad and he has this amazingly wild hair, but then I think when they were taken was probably the dust bowl days where the wind never quit in SD. Love the hollyhocks, they were the first flowers I planted at my new house...then I couldn't get rid of them!

I made dolls from hollyhocks when I was a child.

I am enjoying your old photos.

Grandma is looking at you like she's not too sure about you:)

It's always fun seeing those old pictures. I love hollyhocks too and planted some 2 years ago. I used to make dolls out of them when I was a kid. Maybe I'll have to make a doll this summer.

Both your pics and chubby cheeks are precious.

God bless and have a great day! :o)

It must bring back a lot of good memories when you do these posts. You probably find that it reminds you of other things as well...things not in the picture.