Nice Day and a Movie

We had a really nice winter day.  We played outside moving snow here and there.  I finally made it to the snow stick.

The snow was above my boots. 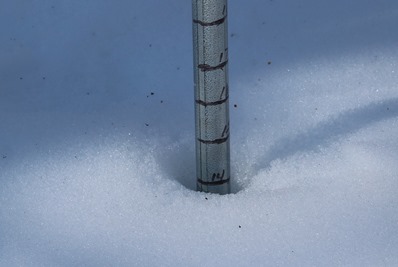 After it has all settled and some has melted we still have 14 inches of snow at the stick. 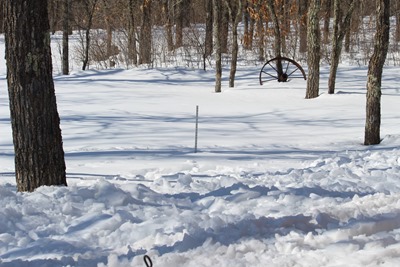 The funny looking snow in the foreground was all snow that slid of the roof.  Chance just hates it when the snow slides off the roof…one time when he was just a pup he got buried in one of the avalanches that came off the roof and Far Guy had to rescue him.

The Grand boys are here visiting.

Adam wanted to go to the movie..so he and I went.  The sidewalk was really icy..I told Adam we had to be careful not to break a hip.  He said “I have never broken my hip, only my arm and that was bad enough.”  I said “Grandma is worried about her hip not yours..so lets walk slow together.”  He even offered me his arm! We saw Jack The Giant Slayer..which is very much like Jack and the Beans Stalk..complete with beans.  It is a 3 D Movie. We got the largest popcorn they had because Adam says a movie without popcorn really isn’t a movie at all.  Adam wanted to sit right in the front row so we did.  During one of the previews I said “Adam did you know Grandma is afraid of heights?”  (The preview had someone leaning over a mountainside.)  He had no sympathy for me..but shared “I am afraid of heights too.”

The movie was very loud..even for my old ears. I am sure I missed some parts of the movie..especially the ones where they were on the stalk and people were falling..and when the 3D bee headed for me I am sure I closed my eyes and cringed. I hope they disinfect those glasses after every use.  The last 3D movie I was to we had the cardboard take home special 3D  glasses.

Adam and I had quite a talk on the way home from the movie. Twenty minutes one on one can give you a good idea what is on his mind. Adam shared that in Health he learned what a diaphragm was and how it helps you to breathe.  He wrote a report about former President G.W. Bush.  Adam said Pres. Bush ran a marathon..but Adam didn’t know what a marathon was…so I explained it was a long race.  When Adam was in First Grade Kelby spit in his eye..and the other day Kelby tried to snap his neck during recess. We are still discussing that situation and how best to deal with bullies… being a bully is not okay. A teacher was present but did nothing.  I suppose the teacher viewed it as horseplay by active boys.  School sure has changed since I was eleven and in grade school:(

What a fun day :-). And how nice you got to share so much with your grandson...and vice versa!

Morning, was a nice mild day here to, like a lamb.....have a great day with the Grandkids, Blessings Francine.

Sounds like you two had a good time ! What a sweet boy offering you his arm so you don't slip , my boy are like that to but other kids couldn't care less . I was bullied in grade school and so was our oldest son badly . In my day they didn't do anything about it when our son was in school I did do something about it I went to the principle then the school board and the kid was suspended and parents grounded them as well . I am surprised the teacher at Adams school didn't do anything as now they are to report any bullying by law at least here they are as it does so much damage to the one being bullied ! I would talk to the school and give the info as to who is doing the bullying , bullying can be deadly now a days ! Hope some one stops it for the little guy . Have a good weekend !

Sounds like a wonderful outing. I imagine my favorite part would have been the conversation.

I take ear plugs to the movies, because some of them are so loud I couldn't stay otherwise. My neck hurt just thinking about sitting in the front row! Yikes! I also hope somebody does something about that bully before he hurts somebody. Adam is a good person already and he's only a kid. Somebody has been raising him right. :-)

What a wonderful memory you have made for Adam. He'll remember the date he had with his grandma for a long time!!!

Hope someone does something about the bullying. The teacher might not have realized that it was bullying and not just 'fooling around'.
I had to laugh about the diaphragm, I was thinking of the other kind:)
Yuk, sitting in the front row would have spoiled the whole movie for me. I'm a 'back row if I can' movie goer. Trying to remember now the last movie I went to...oh yeah, The Hunger Games. The first bit of that movie where the camera was jiggling around was most annoying to my old eyes.

I can't wait until my grandies are old enough to enjoy such an adventure! I would definitely ask your daughter to discuss the bullying incident with the school. If Kelby has been at it for six years, something needs to be done.
Peace,
Muff

Adam sounds like a delightful boy - one that makes a parent or grandparent very proud. He will do very well in life.

It sounds like a perfect day right down to the movie and the giant popcorn.

Wonderful Gran, and grandson memories shared by you guys...

I would have found the movie to be wayyyyy to loud. Good for you to go.

I am discovering what a total joy a grandson is! Praise God that Adam feels secure in sharing things with you. Grandparents instill that trust and we are privileged when they feel that way.

We have lost two children this fall to bullies...it's horrible and sometimes not recognized. My son-in-law is a vice-principal he works hard at helping out bullied children and even the bullies...much to the dismay of the bullies' parents. Bulling is horrible...way beyond the pale.

It was rough, to say the least.

What a great movie date! It's wonderful for kids to have conversations like that with someone who is close to them but not a parent. It gives them someone special to confide in, and a little different perspective.

The world is a different place.

You did have a lovely day! Tell Chance to keep looking up we don't need a buried border collie! :)

You are blessed to be able to enjoy a movie with your grandson. Sometimes the loud volume really hurts my ears, though.

What is wrong with a teacher who would stand by and do nothing about a bully?

That is a lot of snow!

We too discuss what to do with bullies. Is it just me - or are teachers so tired these days they don't have the energy to deal with it?

I'd get fired if I was a teacher! I have more guts than brains most of the time but I'm pretty fearless and I don't care how big they are. One time my kids told me I should be a teacher because the kids wouldn't get away with anything in my class. I wasn't sure if that was a compliment or not because another time I was trying to help them with their math and they told me "Mom, whatever you do, don't ever become a teacher." LOL! I hope that Kelby gets whats coming to him! I hate bullies!