Spring is not here yet

Spring might be right around the corner..maybe.  In Minnesota anything is possible. Most  likely we will have snow the rest of this month and into April.

All good things come to those that wait. Whining does not work. Spring is on it’s own schedule..just because Spring officially arrives in ten days or so..doesn’t mean it will visit Minnesnowda. 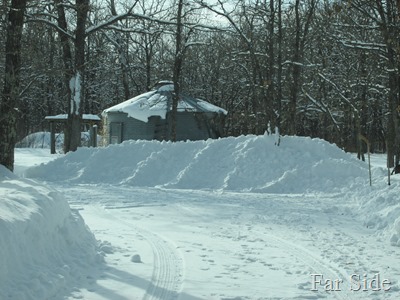 Everyone I have talked to is sick and tired of moving snow.  In town the sidewalks are like tunnels..one of these days I will get photos.

Saw half the neighborhood in the grocery store, and got caught up on most of the area news. Who died, who was sick, who could still not eat regular food, who got their hips done, who had extensive dental work..old people news. You know it has been a long winter when the menfolk are standing around the grocery store visiting. I noticed that almost everyone’s grocery cart had chocolate of some sort too.

I heard that chocolate followed by a nap would make day light saving time tolerable.  I love self medicating myself with a tried and true remedy.

The ditches are full of snow now.  Every time the wind blows the snow will blow across the road.  Then depending on the temperature there are drifts across the road or ice forms as the snow thaws and refreezes. 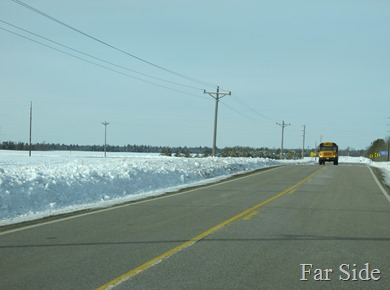 Yesterday the roads were good.  I have seen drifts along this road that were taller.

When I rode the bus back and forth to school I loved to sit by the window and scratch a little peek hole in the frosted up window with my finger nails.  First scratching up and down and then side to side..or cupping my hands together and breathing on the window so I could see outside. If it was really cold I held my thumb on the window until a tiny peek hole appeared. There were old short telephone poles (6 feet tall) along this road, and some years you could have walked along and touched the tops of the poles.  I have not seen snow like that in a long time.  This was also the stretch of road that had a deep ravine where water would collect in the spring and water would run across the highway…near the old farmstead where the lilacs would bloom in the spring:)

Labels: Minnesota weather sucks, Ya I am overjoyed with snow