It snowed another five inches plus.  The snow on the highway was melting.  We followed a snowplow and a long line of traffic to the parade.  The little village of Menahga had snow down the center of their streets. Their snowplow guy might have been in the parade.

The parade was a little late getting started.  Musta been on Finn time:) 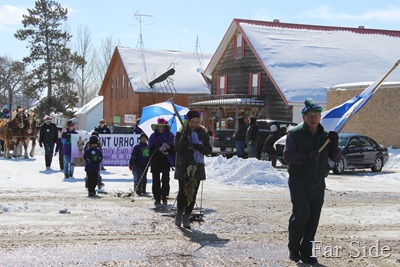 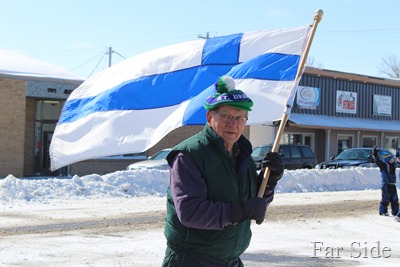 Right behind the Police car is the Finnish Flag Bearer. 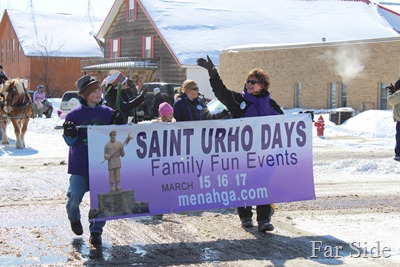 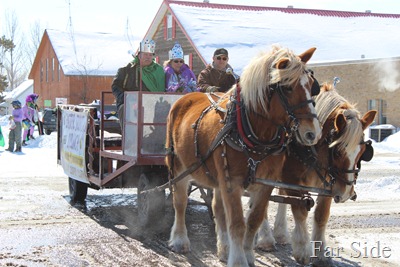 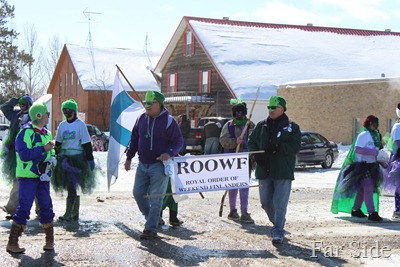 The Royal Order Of Weekend Finlanders were there again! 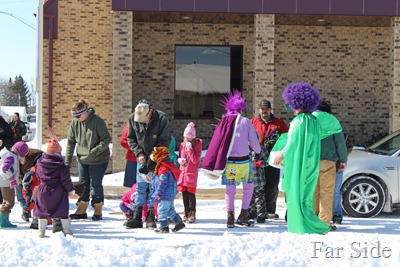 The Nytes of St Urho seeing that all the kids have candy.  Yes, one Nyte has Sponge Bob Square Pants Underwear on! 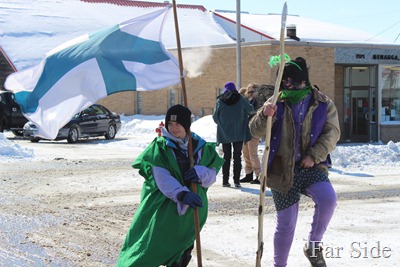 A young Nyte flag bearer.  The older Nytes seem to be recruiting quite a few kids..what fun for them!

The grasshoppers were escorted out of town in grand style.  The grapes will be safe another year!

It was a wonderful little parade..it lasted all of 7 or 8 minutes.  Chance watched it  from the curb,  he was a real good boy and didn’t bark at the horses..he just watched them:)

Top o' the mornin' to ya on this St. Paddy's Day. Love the St. Urho parade pictures. It might be cold but it sure looks sunny. :-)

I had a suspicion it was Menhaga! And your 7 minute long parade beat Cherry Groves by a minute. Main street is one block long. Three minutes down, stop, turn around, go back, grand total 6 minutes on the 4th of July....:)

One of those little towns where you are either in the parade or you are watching it:)
Glad the weather cooperated. Looks like fun!
Re troutbirder's comment. Our neighbour the daffodil grower, her name is Cherry Groves:)

Looks like great fun! Thanks for the front-row seat.

The team pulling the royalty is beautiful.

What fun, but it looked cold! I'm glad Chance had a good time...did those crazy guys give him candy? I think 7-8 minutes would be longer than today's parade in Padua for St. Patrick's Day. (Don't bother looking on the map!) Remembering my Irish grandma today.

The Finns really know how to have fun. I like the ending to the description.

Something new to me too as are many things about MN where we now live.

What great shots - love those grasshoppers braving the cold.

Chance: what an admirable display of self-restraint! You are indeed a model parade-goer!

What fun! I love the community humor!

Oh yes, I had forgotten about the grasshoppers. I bet they had little snowshoes on while they were being chases out of town. It's a great tradition and am glad they keep it each year.