I know nothing of sled dogs teams.  I can only relate what I observed.

There were two different sled dog teams at the Football Field in Menahga on Saturday. I photographed both teams.  This is the first team that took off.

The dogs were excited.  They were ready to work.  They looked healthy and lean, their coats were shiny. 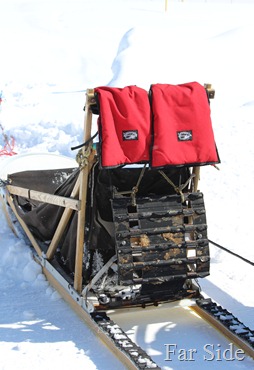 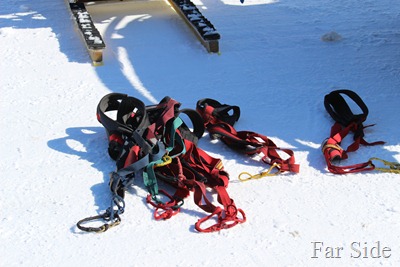 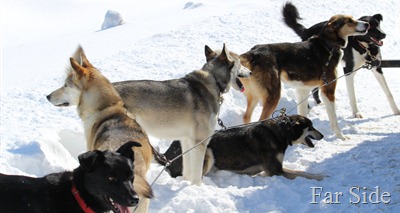 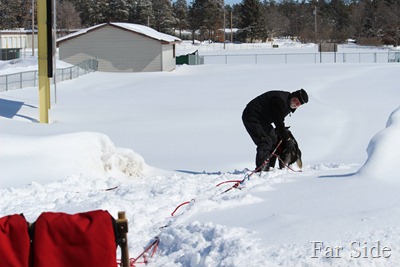 The  “Musher” hooks up the lead dog.  He took much care with him/her with a special padded neckpiece before the harness went on.  I am sure this is an older dog, I could tell that they had a special bond.

Once he/she was hooked up he/she waited patiently..I am certain she is used to the wait.

The dogs are tethered to a line attached to the sled and the sled is tethered with a line to the pickup where the waiting dogs are kept.  This was an important observation.

As the dogs are added one by one to the sled.  The dogs become more excited.  I think the young ones are in the middle of the team.  They were the most excited.  That black one with the red collar in the photo was so excited..and a pill.  The musher told him/her to quiet down several times.  I finally asked him if that one was a troublemaker..he said “Yes, I have a few that are just 1 1/2 years old, they are learning the ropes.”

The dogs get more excited as every dog is hooked up..the anticipation is almost unbearable for some of them..they bark and bark..one left back in the truck howls because he/she wants to run too.  The pickup rocks back and forth as the dogs strain against their harnesses. These are strong dogs. 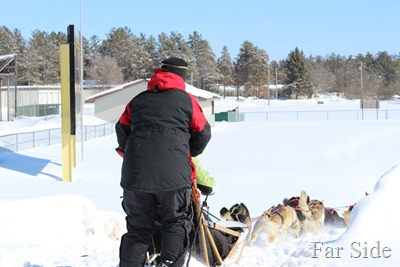 The musher pulls the slip knot..and they are off..everyone is silent..the barking has ceased.. the pickup has stopped rocking back and forth..they have a job to do and are excited and happy to work.

The first round in the fresh snow. 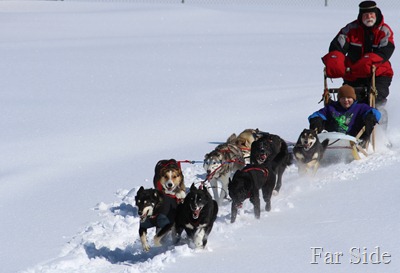 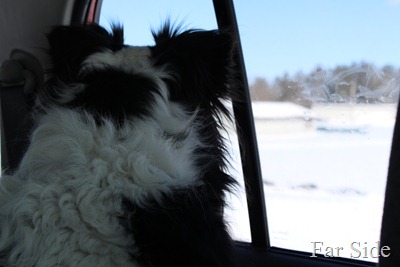 When I finished taking photos I walked back to where Far Guy and Chance were.  I showed them where to park so Chance could see the action.  He was mesmerized by the sled dogs going round and round..we both wondered what he must have been thinking as he watched quietly:)

What fun! We saw a team hitched up to run by the rangers in Denali N.P. Alaska. The sled was on wheels and off they went. The scenario was just the same with the dogs going crazy wanting to run.....

Wonderful photos and post ! Chance was probably wanting to go and run with them and have fun . Thanks for sharing this with us . Have a good day !

I bet Chance was thinking - Hey, I want to do that, let me out, those dogs out there are having fun and I'm stuck inside the car, let me out, I want to play with those other dogs. Hahaha

Oh, what a great post! I sure enjoyed seeing and hearing all about the sled dogs, not knowing anything about them myself. And I too wonder what Chance might have been thinking. :-)

Argh - too fun! I need to move ;-). Chance needs to meet Bet, the Border Collie in charge at North Wapiti http://northwapiti.blogspot.com/

Morning, beautiful dogs in action....great pictures......I would give anything to know what Chance was thinking, :)Blessings Francine.

Perhaps Chance was thinking....better them than me??!!! I talked a "sledder" the other day while at Costco. She has three Malmutes. She lives in a suburb and her dogs are permited to "run" when they go "up north". Sled dogs are famous for "running away".....she has a female who collects the other dogs when running off leash is over. Her little girl told me....come to my house we'll give you a ride. Cute.

How fun! I've never seen a dog sled. Thanks for the photos and explaining how the dogs are hooked to the sled. I bet the kids have fun riding. Wonder what Chance was thinking.

Your outing looks like a lot of fun. Why didn't you take a ride?

The Stage Stop sled-dog race has a leg through the Wind River mountains. I've never gone to see them, but I really should.

It did have to make Chance wonder as he saw the dogs running. It is a good story to hear how he nurtures and cares for each individual as he hooks them up to the sled.

I'm betting Chance was wanting to join in the fun. I would if I were a dog and had a fur coat.

I know what Chance was thinking. He wanted to herd those silly dogs and tell them where to go. He's a border collie after all. Dog teams are total chaos sometimes. When I was in the Arctic the little kids played dog team. It was a hoot. The dogs(kids) would misbehave and the driver would use his whip!

I was wondering about Chance. Bet he would have loved to be in the action!

Chance was trying to figure out where the ball was that those dogs must be chasing:)

I'll bet Chance dreams (now) of being a sled...sort of like people dream of time travel...:)

Chance was probably hoping you guys weren't getting any ideas! LOL!
Very interesting. I've read several books involving sled dogs teams. I never get tired of hearing about them and their amazing feats! Thanks for the great pics!

Great photos and post! I bet Chance was checking out the ladies...

It looks like a winter wonderland - and such fun shots of the dog sledding too.