Somehow my paternal grandparents met. Their families lived a mile or so apart. There was no story to pass down. (Perhaps when my Grandmother arrived from Michigan when she was 21 years old, she had her eye out for a handsome young man…) They attended different churches, and didn’t believe in dancing..so perhaps they met at some community function. Grandma was an older woman..she was 22 and Grandpa was 20 when they got married August 2, 1911.

When I asked my Aunt Anna how she thought they met, she said that such things were never talked about. 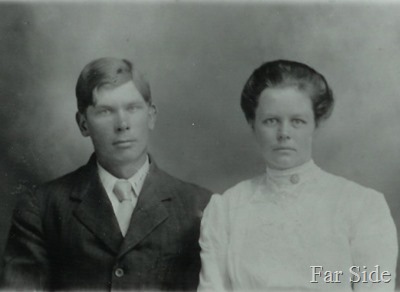 Grandma was a midwife, she helped to deliver many babies. I often wonder who midwifed for the midwife?  Grandpa was a logger during the winter and a farmer during the spring, summer and fall. 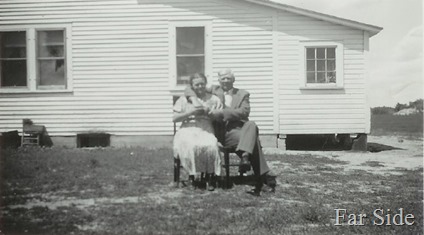 This was their 30th Wedding Anniversary photo in 1941.

The same day a family photo was taken. 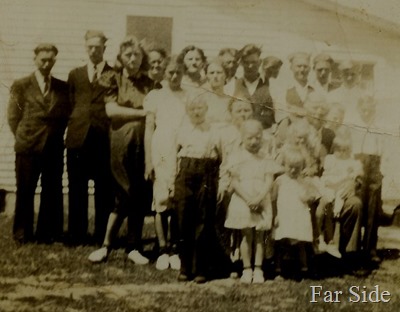 Somewhere I have a list identifying everyone in this photo. 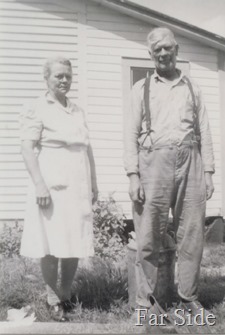 Grandma and Grandpa about 1950.

I love that he threw his hat to the ground for the photo and was there cream in that cream can?

I cannot tell you any stories about them together.  I can only imagine that they must have loved each other, they were married for 42 years.  My Grandmother died in 1953 when I was just 21 months old.  I have socks that she knit for me to keep me warm. 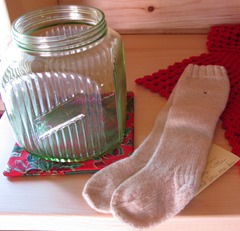 I keep them upstairs in an old cookie jar with a note:)

That is a sweet story. It sounds very much like the story of my paternal grandparents.

You can see the old man in the young one, and her expression looks just the same. Nice pictures and story, as usual. I love to look at old photos.

Wonderful story and photos of your family history ! That last photo of whats in it priceless ! Thanks for sharing , Have a good day !

I love these kinds of stories. Aren't they wonderful? Very sweet and makes us think
about all of our relatives. Nice photos also. Have a nice day!

Morning, Loved your post today, so so interesting and the old photos are remardable......really enjoy family history..........great old jar and sweet socks, Francine.

My gosh, I wonder how she midwifed when she must have been constantly pregnant herself!

A beautiful story! I love the old photos!

Very nice post... wow so many children! Love the socks - even the littlest of things can have such importance :) have a wonderful day!

If only that little cookie jar could talk; think of all the little hands that have reached inside. Thanks for your story today.

Wow 14 children! How did the mothers of those large families ever survive? They didn't have all our modern appliances to ease the workload.

The socks in the cookie jar....sweet:)
14 children, wow, thank goodness for birth control these days.

I love reading your family stories and seeing the photos. That dress the grandma is wearing at the top is gorgeous! Did anyone ever preserve it? Edwardian fashions are one of my favorites!
Peace,
Muff

People from that age are amazing. The social conventions were very different as they don't tell us some of the details of their life which we consider ordinary today. They had no conveniences and yet lived a very happy and productive life.
The days of the old style midwives must have been fascinating as they welcomed new little people into the world.

Awwww, how precious it is that you have kept those socks safe and sound. Wonderful pictures!

It never ceases to amaze me how these old pics could be interchangeable between families. They look so simular to the ones I have tucked away in the big old trunk!

God bless and have a wonderfully warm day sweetie!!! :o)

Hi Connie. What a precious post. Love your photos and the treasured socks. That's cute about his hat on the ground.

I love the sense of history you have, even when there isn't much of a story known!

Looks like my mother's family, also 14, also on a farm, only this time in Minnesota. :-)

How sweet that you still have those socks!

I wonder if there are any mentions of your grandparents in any local newspapers of the era in which they got married. Some of the smaller newspapers certainly could print some stuff that I'm amazed to see included in newspapers--like the social tidbits. Perhaps you could find some gems there???

I love your stories about your ancestors. I had to laugh when you said your grandmother was an older woman. I am 2-1/2 years older than my husband. We got married when I was 21 and he had just turned 19. My mother-in-law thought it was good that her son had married "an older woman" because it settled him down. That didn't go over very well with me at the time. :) The photos of them are so great. I'm glad you have them.

Very sweet story. My grandparents were my second parents because my mom worked, so they picked me up from the school bus stop every day from first grade through 5th. By 6th grade, my mother decided I could walk to our nearby school. Grandma lived to be 100 years old and Grandad, who was 3 years younger than her, lived to be 97. They both came to California from Kansas when Grandad hurt his back and could no longer farm. They lived in the same house in Arcadia, CA for nearly 70 years and raised my mom and aunt there. We used to have family picnics on their side porch and watch the fireworks on July 4th from their house. They died in 1993 and 1994 and I miss them every day.

One wonders how she had time to midwife for others when she was having and caring for 14 babies of her own!

That's a lot of children! I sometimes wonder how they managed back then...

These are great photos. The top two are my favorites. I like that he was younger and one always wonder how the do get together.

I love hearing about your family and I haven't heard the name Einer for forever. I think the last time was my ex's grandmother's brother was called Einer. They were from Sweden. Love the pictures and how precious that you have those socks she knit you....what a treasure.