In the middle of the night on Friday Chance had to go out.  It was raining ice..it sounded funny on the roof of the overhang as I encouraged him to hurry and do his thing.

Then it snowed..then it quit..then it started to snow again.  I think we have about six inches of new snow…heavy wet snow. 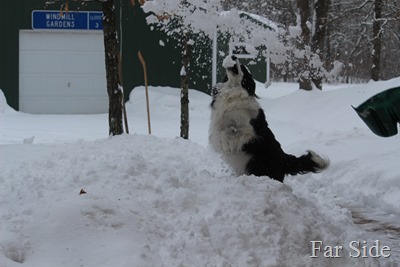 Late in the afternoon we went out to the big snow bank. 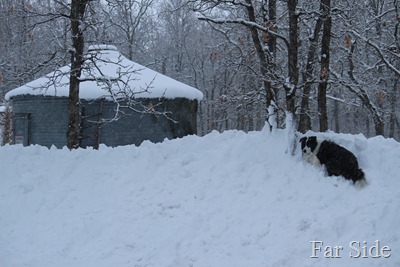 Yes, we have enough snow.

I cannot see out the living room window. 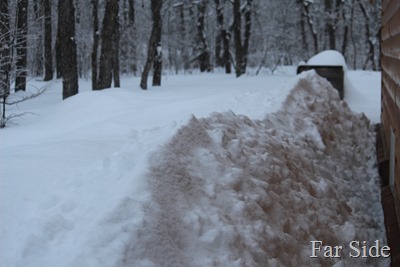 Why?  Because all the snow falls off of the roof and falls right in front of the window.  Far Guy says he might shovel it out tomorrow.  Strange to look out a window and all you see is a snow bank.

We ventured out to go to the dump and recycling center.  The whole world is white out there. 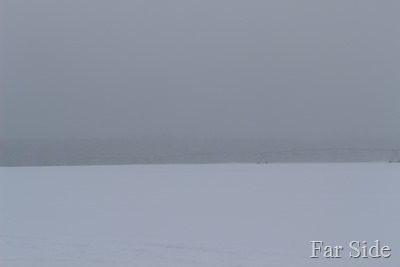 Welcome to the White Winter Wonderland better known as Minnesnowda.

Just a reminder to change the batteries in your Smoke Alarms and Carbon Monoxide Detectors..have fun springing ahead:)

Not to brag...it was 72 here yesterday! I'm as shocked as you. This morning it rains which is good we want all the moisture we can get.

Love that Round? building.

Ouch, I shudder thinking of all of that snow. It has rained here for 2 days and our snow is nearly all melted away.

Wow! Now that is some real snow, and it will be good for the ground once it melts, right? :-)

I wish North Dakota, Minnesota, and Colorado would share some of that heavy snow with Wyoming. Please send some my way!

You're really getting your share of snow. You now have the opportunity to get lots of good snow pictures.

Morning, looks like out my window too, big snow banks.....Minnesnowda, too funny,just like our Winterpeg, you made my morning,Blessings Francine.

Oh my! You are still looking very wintry! I hope it melts away now so the daffodils can poke their heads out.

I sure hope you love the snow and living in the north! Like I said before, I will try to refrain from complaining about my piddly bull.... snow!

wow and I thought we had a lot of snow here in WI. Ours has started to melt with the warmer temps and the rain. Now we get to look forward to possible flooding.

My wish for you is fast dripping icicles and warm westerly winds. Have a wonderful Sunday.

Brrrrrrrrrr!Blessed to be in the southwest!

That is probably an old joke to you all but I have never heard it called Minnesnowda before. That's cute and appropriate. I won't tell you how beautiful it is here today - - - but gorgeous and perfect come close to the temps!

Yes. Ugly stuff it sleeted here most of the day also. And turns to snow tonight. Now was it a year ago about this time we had a seventy degree day....:)

I'm glad I get to enjoy my snow vicariously through your photographs. That's close enough for me :)

Count your snowflake blessings, we are horribly dry here and not looking forward to summer fire season at all! I'm hoping that somehow it decides to be a "wet spring"!