Alrighty then!  I am all set for the snow stick contest! 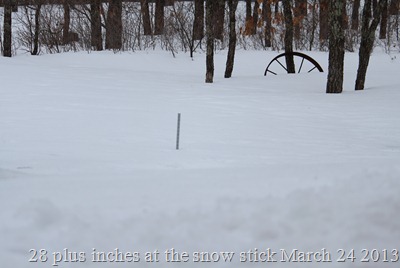 Please leave me a comment stating the date and morning or afternoon of your guess.  Guess whatever date you think the ruler placed next to the snow stick will be free of snow and or ice.  We have about 28 inches of snow at the stick.  We had 31 plus inches but the snow settled some.  I am not trudging out there to get an exact measurement.

Last year the snow was gone from the stick on March 13 and in 2011 it left the stick on April 8.  I could hardly believe that last year at this time we had the start of green grass and I photographed robins through the window.  How depressing.  BUT it could warm up and start raining any day now.
Anyways.  I finished the small carvings for the Snow Stick Contest. 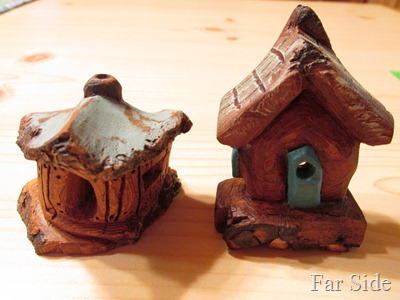 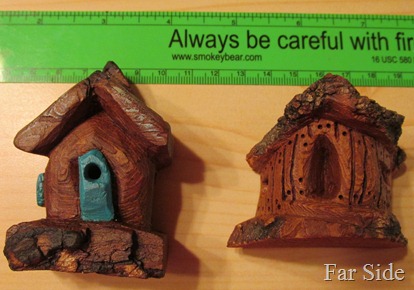 Guess away..and I hope no one guesses July.  Guesses will be accepted until Thursday March 28 at 9PM.
The carvings are from Cottonwood Bark that was collected along the shores of the Red Lake River near Fisher Minnesota.  We only collect dead bark.

I like carving with bark..the pieces fit nicely in my hand and are easy to carve.  They are painted with an acrylic paint and have a Bee’s Wax finish.  Each piece of wood has a different house in it ( In my mind)..the house on the right leans a little..as if it was anchored someplace where the wind blows all the time and it has slowly shifted over time..and I gave it a wonky roof.  The one of the left is a Springy little house..possibly on a tropical island someplace where it is above zero ALL the time:)

State the Date and Morning or Afternoon and I will post all the guesses here!

Morning, wow, lots of the stuff left, it was gone last year at this time here....Love your carving, wonderful......Well, I will say April 29 we will see the whole stick.....Spring Blessings Francine.

I'll guess the afternoon of April 27th. Love your carvings!

I will be more optimistic and guess April 14. I know it's probably not likely, but you never know, and one can hope, right? :-)

I will guess the afternoon of April 20th. Both carvins are adorable.

It's snow here as I type... I thought the snow was gone and done and dusted for the year.. but noooooooooooo..... :)

My guess is afternoon on April 15...along with income taxes the snow will be gone.

I predict you will get some Chinook winds soon.

April 13th before noon! (But I hope it's much earlier!)
Peace,
Muff

I will guess April 10th afternoon but hoping it is earlier as I am hoping spring weather shows up here to soon lol ! Oh those carvings are cute . Have a good day !

April !6th in the afternoon.

Love the carvings! Mr. Dreamy got some carving tools and has just begun trying his hand at it. I can't wait to show him your carvings!
April 17 - afternoon

My guess is April 10. Any prize for being the most wrong?

June 1 midnight....okay I'm just being mean! LOL I love your carvings, you've been busy whilst snowed in!

I love those carvings! You are so artistic. I'm going to guess the morning of Friday, April 12. But what do I know?

April 17 morning. We are having flurries today in GA!!

April 30 in the morning.

I'm going to go with April 18th in the afternoon.

April 14 afternoon Love these two little houses! Hope I'm right so can add to my collection!

The way things are going at the moment - 21st April (morning)

Hey...it's still snowing at my house....April 19th....the day the humming birds are due to return...Enjoy

April 15. We have snow cover this morning. Snow started on Sunday afternoon and continued all day yesterday. Lots of school delays and closings because the roads are icy. Ice is what I think about when I think of winter in southwestern Ohio. Temperatures are often perfect for ice and sleet.

I noticed someone else chose April 15. Make that April 15 early in the morning.

April 26th UGH That is depressing...I hope it is sooner not later!

Well, listen, I have no idea about snow. It is a perplexing thing to me. I do know that I am usually very jealous of you and your Minnasnowda. I usually love it when we (finally) get snow in April and the hyacinths wear little snow crowns. But to tell you the truth, I'm to far into no snow this year to go back. It seems to be so bad that I am happy to hope for no snow for everyone else too. So here's my hope for you, may your snow be gone by April 8th, twelve more days. I would have said sooner but I would like to think I have a chance at one of your clever little houses. I adore them. But mostly I hope that for you I am dead on with my prediction.

Well, I have never lived where it snowed being from Fort Worth and all, but I think about April 15th in the afternoon.

Ya-hafta laff at FarGuy's prediction... of course if it comes true, I'm assumin' you are moving some place warmer!