The parade is today.  I am hoping to get some good photos.  Last year it was 60 degrees F this year it might get to 15 degrees F…that converts to –9C..balmy.  It snowed and snowed yesterday..so we hope the roads are clear by parade time.

If you haven’t heard of St. Urho before you must have been living under a rock.  He chased the pesky grasshopper out of Finland and saved the grapes.  Finns all over the state of Minnesnowda celebrate the 16 of March!

Ooksie kooksie kollme vee
Santia Urho is the boy for me
He chase out the hopper as big as pirds
Never before have I heard those words
He really told those bugs of green
Bravest Finn I ever seen
Some celebrate for St. Pat and his snake
But that Urho boy got what it takes
He got tall and strong on feelia sour
And ate Kalla Mojakkaa every hour
Thats why that guy dould chase those beetles
That crew as thick as jack pine needles
So let’s give a cheer
in our very best way
On the sixteenth of March
St. Urho’s Day! 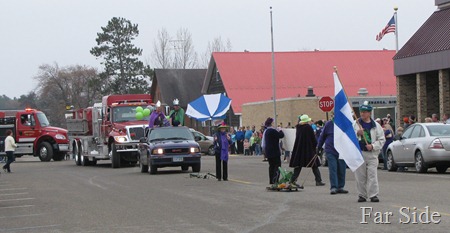 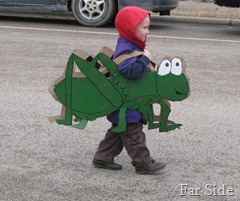 One of those pesky grasshoppers!

It snowed all day yesterday, morning, afternoon and night. 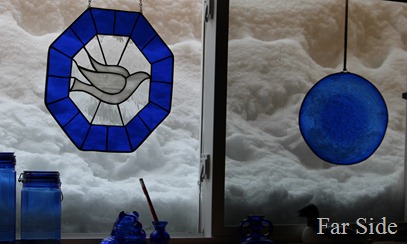 This is the view out the Living Room Window.  The snow keeps sliding off the roof and falls right in front of the window.   It makes you feel like you live in a snow cave.  It is surprising how much light can get through a snow bank:)

Happy St. Urho Day. May he send your snow the way of the grasshoppers.

Oh my, that is some snow. It has been quite a while since we have had that kind of snow. I have to say though that I don't miss it. Spring will arrive before you know it.

That is quite a temperature difference year over year. And that snow is amazing! It's only because of YOU that I know about St. Urho! I look forward to your pictures. We are having a St. Patrick's Day parade here today. :-)

Despite the snow, may the day be filled with good cheer and warmer temperatures.

It's a great day for the Finnish! Hope the day is fun.

Happy St. Urtho Day!! You are right, it was really warm in the north, last year!!! I hope you will be able to see a 'real' view out that living room window real soon.

Well, I've been living under a rock. I have never heard of St. Urtho. But I must also have a super forgetter as I never miss your blog and there you have it...last years parade! I hope everybody had a wonderful day even if it was cold.

That's it, we are all going to have to band together and send you warm weather wishes.

Wow that's amazing amount of snow falling from your roof.

The town of.... ? Actually I know a lot of bad jokes about the Finlanders Saint. Mostly from visits to Menhaga bars and sauna, 1st Crow Wing and Mantrap...:)

I have not been living under a rock. I have been reading Far Side of Fifty :)

Hmm. I sent a comment yesterday, well I know I wrote it, maybe I didn't send it?:) Anyway, wanted to say that I like all the blue things you have in that window, but not being able to see beyond the snow would have me out there shoveling a peep hole:)

I think you have had your fair share of snow this year. It is getting to be a long winter.