Our oldest daughter Trica shares a birthday with her Great Grandma A. She also shares a wedding day, June 18. Great Grandma ( Meady) died in 1990 at the age of 96, Trica was just 18 then, she had met her prospective husband in high school, but she did not date him until she was in College. They were married at St. Johns Lutheran Church in Park Rapids, Minnesota. 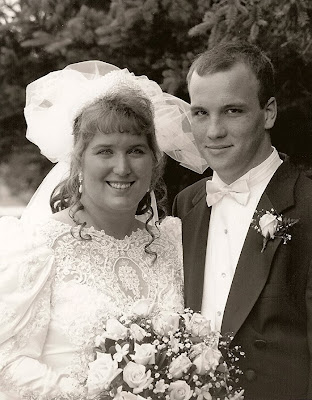 Trica and Dick 1994
Meady and Curt 1913
I will share what someone wrote in a Who's Who column that I found taped to one of Meadys Photographs. It is unsigned, so I have no idea who wrote it.
************
Meady and Curt were schoolmates in the lower grades. Her family moved and she went to another school so didn't see him very often until later years when she saw him every Sunday. Being a little late one Sunday evening, he took a short cut to her home. Dear Molly was pacing down the road in high gear when a skunk walked out and took the right of way and Curt had to turn back. For several months he had to walk until the rains washed the buggy wheels clean of that everlasting odor. They were married June 18, 1913 at the Congregational Church in Park Rapids, Minnesota.
*******************
I had nothing to do with choosing the wedding date, Trica was 22 years old by then. However Far Guys Mom was just thrilled that her oldest Granddaughter would be married on her parents wedding day. Two women born exactly 79 years apart..sharing the same date on the calender for their wedding day, 81 years apart:)
Posted by Far Side of Fifty at 11:49 AM

Thank you for sharing this story and those beautiful wedding photos. That is just amazing!

Great story and photos. I chose my parents date as my wedding day, they were also thrilled about it.

It's a great story and your daughter is lovely.

Happy Anniversary to Trica and Richard. That's special to have Bday and wedding date! jo

great family... we have family bdays that have family synchronicity too.. happy happy all

Is is my imagination, or does your daughter bear a strong resemblance to her great-grandfather?

My husband's parents were divorced when he was about 10 years old. We unknowingly chose their wedding date for ours. It was a lucky date for us, though, almost 30 years together!

That is so cool! And they were even married in the same city. The pictures are beautiful. We love wedding dresses. Happy Anniversary Trica and Dick!

Your wedding photos and history are wonderful. My oldest dauaghter was married on the same day as her father and I were, (Aug.11,1956) Oh my that was a long time ago. lilly

laughing about the skunk spray.

I would say that Tricia bears some resemblance to her great grandfather.