Maddie's Adventure On The Farm

Maddie, our granddaughter who is eleven years old, spent a week on my sisterJulie's farm. I interviewed her when she returned.
What was the best part Maddie? Seeing all the animals and riding, giving out special treats to the horses and petting and feeding all the animals. Learning to ride!
Tell me about the horses? Well, there are three, Trudy is a Bay, a Quarter Horse Thoroughbred. Annie is a Tennessee Walker she is mainly black with brown splotches. Buddy is a Tennessee Walker too, he is pure black with a white strip and two white socks.
Did you wear a helmet? Yup. I wouldn't ride without one, I wore it every time.
Tell me about your day? Well we got up and did morning chores. The sheep got corn pellets, they love it dry. The pigs get pellets too, mushed up with water or milk, and scraps like potato peels and banana skins. 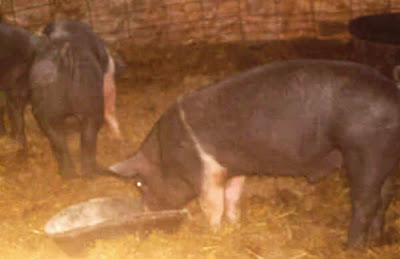 You have to be fast when you feed the pigs, they are hungry and want their food, they will knock you over if you aren't fast. The pigs are mainly smelly, poopy, watery and muddy..I got some on my boots but I just scraped it off with a stick. The Pigs names are Pork Chops, Bacon and Ham because that's what they are going to be. 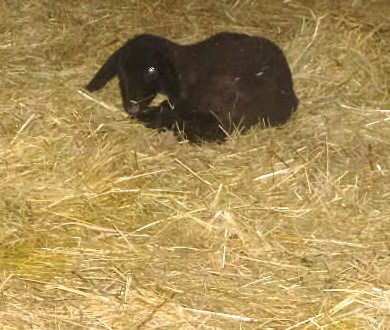 The saddest part was when Georgie died, Georgie was a little tiny lamb, he was not doing so good, his insides were all twisted. I did get stepped on by Georgies Mama, she did not want him to nurse, but it did not hurt my foot at all. 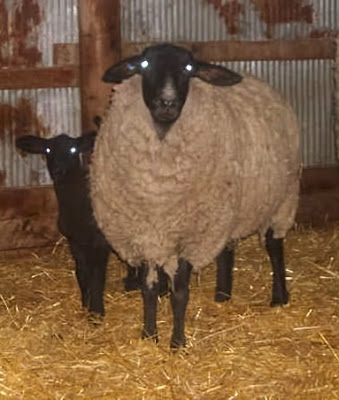 If I had stayed another day I would have got to help band the lambs long tails, did you know they are born with long tails? So you band them, their tail falls off and then they have short tails. I am missing that, darn.
In the afternoon Rachael would work with me on the lunge line. Practicing how to ride. We practiced for four days, Trudy is bumpy, but on Annie it was just like floating, following the rhythm. You act just like the horse is your legs. It was so much fun. 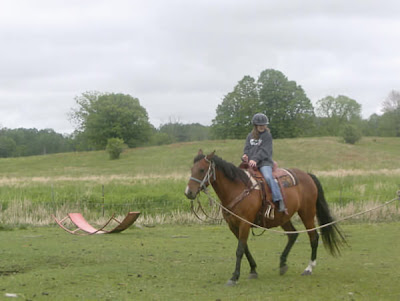 Maddie on Trudy..note the lunge line.
Did you ride all alone? YES! I did really good too!!
Tell me about the other animals? Well Smokie Joe, is the cat that just came one day and stayed, he is in the Hay Mound, and kills pigeons and mice. I liked Hercules, and Bear the outside dogs. What about Nellie? Oh she toots a lot ( Nellie is a Boston Terrier inside dog). Are there any chickens? Nope, they used to have some, and a Fox came in and killed them all.
What else did you do? Well we went to an Ultimate Frisbee Challenge and they won. We went to Dairy Queen, one day we went there twice. We watched movies..Have you ever seen The Horse Whisperer? Yes, I have Maddie..did you like it? I did except for the first part, that part was really sad.
How was the food? Great! What did you eat? Salad, pizza, Swedish meatballs, mashed potatoes, gravy and corn. We made Monster cookies one day and a bundt cake too.
Grandma, did you know your sister sews? Yes. She is going to sew me a horse skirt just like Gracie was wearing..and maybe even a yellow or green shirt too.
Grandma, I learned three new words last week. Did Grandpa give you the sheet of paper I wrote them on?
Yes Maddie he did!
Ipifiny.............sudden relization
Constipated.....can't go potty
Casterated........loose your manhood
What an experience for Maddie, she is at such a good age, she soaks everything new in. The world is at her fingertips.. I do believe she just might be a horse person:) 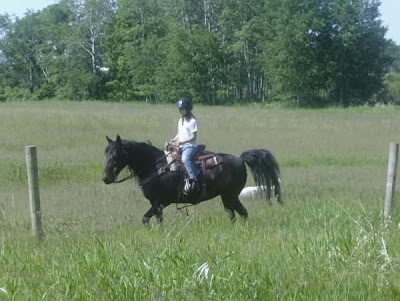 Maddie on Annie, riding all alone and doing really good!
All animal photos taken by Maddie, Horse riding photos taken by Rachael ( My niece)
Posted by Far Side of Fifty at 6:05 AM

Constipated and Castrated. LOL I hope she doesn't include that in an essay about things about her summer when she goes back to school. Love the story. Maddie sounds delightful. You are a very lucky grandma.

Sounds like a wonderful time... And those poor poor pigs...

Maddie looks like a natural on the horse and is quite the animal photographer too. What a fabulous summer memory for her.

What a great interview with your granddaughter!! I loved it! Yes...I think she will be a horse person. I truly believe that introducing children to animals at a young age, gives them a sense of being that stays with them throughout adulthood. It is a wonderful gift, being able to go to that farm. One summer, when I was the exact same age, I did the same thing. I will always remember it. You are a super grandmother! Thanks for sharing Maddies's adventures!

This is a great interview. I'm so glad she had a good time and learned so many new things. I would sure hate to have that lambs mama step on my foot! Yikes!

On another subject - We are having a terrible time accessing your blog. It started yesterday and the problem is on the home computer and the work computer so I know it's not our PC. Anyway, I keep getting a pop up window saying something about "a script in this movie is causing Adobe Flash Player to run slowly . . . blah blah blah. Then several times it has locked up my computer. Very frustrating. Is anyone else having this issue???

So, we are here dear Far Side, we are just having a bit of trouble getting to you!

Emma Rose and The Duchess

I so enjoyed this post, seeing the farm through the eyes of your granddaughter.

Hi,
It's me again! I've been popping in and out of your blog for almost an hour now and it seems to be working fine! Go figure!
Anyway, glad I can visit without rebooting!!

Kisses for Chance,
ER and TD

Emma Rose and The Duchess, Sorry you are having a problem, I got that same message one time yesterday..I assumed it was a blogger issue..but it might be one of those widgets ..so I will remove them. If anyone else is having a problem, leave me a message! Thanks!

Just came across your blog and really enjoyed reading this post. I've got two of my grandsons with me for the summer, ages 8 and 11, and what an adventure it is for grandma! And I only thought I could handle this..

What a wonderful vacation your granddaughter must have had. When my grndaughters visited when they were that age all they wanted to do was cook and the boys wanted to fish as we lived on the water. To bad they have to grow up so fast.Now I marvel at how fast the great grandchildren grow up. Raining here today but no thunder storms. lilly

Maddie - you look wonderful on that horse. It sounds like you had a wonderful time at the farm. I spent a lot of summers riding horse and hanging out with Julie.... Just horsin' around! Have a wonderful rest of the summer!

Oh, what wonderful memories she will have!

What a great time for her! She will certainly remember her stay on the farm for a long time.
Seems like she may be wanting a horse too!

my 13 year old grandson is here He just wants to text message, and get on Myspace, play computer games.

Aren't grandchildren just the best thing in being a parent. I can't think of anyother thing that is as wonderful.