The Minnesota State Flower is the Showy Lady's Slipper. It is a native plant. It's scientific name is Cypripedium reginae and it is in the Orchid family. This is the week to look for them along the ditches in our area. They usually begin blooming around Father's Day. Far Guy and I await these blooms every year, for us it marks the beginning of Summer in Minnesota, Father's Day and of things discovered quite by accident, things lost and found again.
Last week one day I sent Far Guy into a ditch to photograph some Indian Paintbrush for me, traffic was terrible, and it was quite a hike from a safe area to pull over. Usually I wear long pants, and my hiking boots when wandering around in the ditches, and that day I was wearing capris and crocs..very inappropriate for walking in a ditch that probably has Wood Ticks and Poison Ivy and who knows what else. Far Guy really likes Indian Paintbrush and he never wears capris or crocs ..so I sent him in alone. He took forever, and seemed to be spending a lot of time away from the Indian Paintbush. I will have to go back, because he only got one good photo... 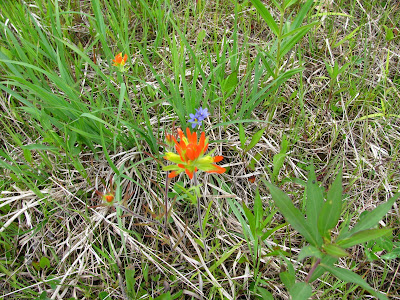 Indian Paintbrush or Castilleja coccinea
This is what had captured his attention..and he only got one good photo. I should give him some camera lessons! The Lady Slippers were beginning to bloom on the north side of the road! 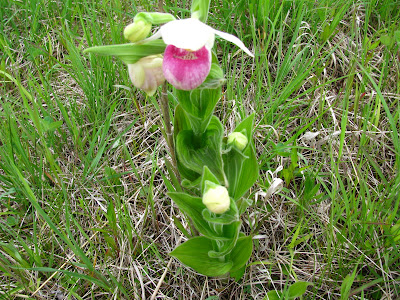 The Minnesota State Flower, The Showy Lady's Slipper
Years ago when we first bought the Resort, we stacked up all the logs from the trees that had been uprooted from a tornado, we stacked them in back of the house. The next spring there were still a few logs back there, Far Guy was mowing the grass when he started hollering "Come see this, you are never gonna believe it!!" What he found was a Showy Lady Slipper in bloom, it came up in the lawn and was struggling to bloom on both sides of a log. Former resort owners had been mowing it over for years. Far Guy built a little fence around them. Years later some idiot removed the fence, when Dave bought the place, and was tearing down most of the buildings, he asked us to try and locate them for him. I knew exactly where they were, Far Guy said "Are you sure this is the exact spot?" I was pretty sure, if not exact, really close. We marked the spot and they were saved. It has become quite a clump over the years. Saturday evening we went over to take some photographs. Dave has them surrounded by chicken wire and fence posts, which makes them difficult to photograph, but I tried my best!
I will have to do some serious ditch walking this week, there is nothing like seeing these beautiful plants blooming in the wild :)
Posted by Far Side of Fifty at 10:58 AM

OMG! Those are beautiful!!

Everytime you write something it reminds me of one of my own stories. This post reminded me of one that's a little embarassing so I won't share it on here. If you'd like to hear it just email me and I'll write you back, but you must swear to keep it a secret!

Hi Connie, What pretty flowers these two are. I've never seen the Indian Paint Brush up close before; the colors are spectacular. And the grouping of Lady's Slippers are so nice. Hope you two enjoyed Father's Day.

Good Morning Far Side,
I remember Indian Paintbrush from my childhood. It is so pretty. And the Lady Slippers are just too wonderful. Some of the most beautiful flowers seem to grow wild. God has a very green thumb!
The Duchess
PS Emma sends kisses for Chance :)

Those are beautiful! I've never had the opportunity to see them at all, let alone in the wild.

And we used to think that seeing a few seed grown lady slippers at the nursery in bloom was a big deal. Wow, I have never seen more than 2 or three blooms at one time. And that would be 3 pots.

I remember the indian paintbrush from my childhood at my Grandparents farm. Yes the same place we did the rain dances at.

They are very pretty. I love wildflowers. I wish there were more of them along the countryside like there use to be years ago.

The flowers are beauatiful. Are they fragrant or just plain beautiful. They almost remind me of a jack in the pulpit that we used to find in the woods when I was able to wander around. lilly

Hi Everyone, These flowers have no fragrance, no smell to attract insects for pollination. :) Connie

The lady slipper is so impressive. We use to visit a resort at Grand Rapids and one of the residence found an area a lot like that growing off of the road in an open area of the woods. That was the first and last time that I have seen them. Those photos, even the one in the ditch are fantastic.

Thanks to you and Far Guy for braving ditches and traffic to bring us some great shots!

I have ALWAYS wanted to see a lady slipper in real life! Not a photo in a book. I'm sure this is as close as I'll ever get so I THANK YOU!

i've seen them in the wild over by spirit mountain and at Jay Cooke, but not in such wonderful abundance!