Sometimes it is the little things that inspire me the most. Things that others may pass, are they too busy to stop, don't they care? It is a "Prairie Birthday" for so many plants..especially the little wildflowers in June. Some are blooming along the drive, others are found out on the edges of the fields where corporate farming takes place. They are survivors, they are blooming, so it must be their birthday! Every year I notice some plant, that I never took the time to identify before. Some only bloom for a few days, if you are not at the right place at the right time..you will have missed it completely. 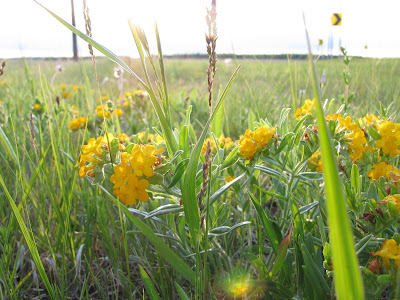 Hello Hoary Puccoon! You certainly are yellow, those cars travelling by at the speed limit probably just think you are a dandelion.. I know better. If they looked closely they would see that you are really yellow/orange, and look nothing at all like a dandelion. 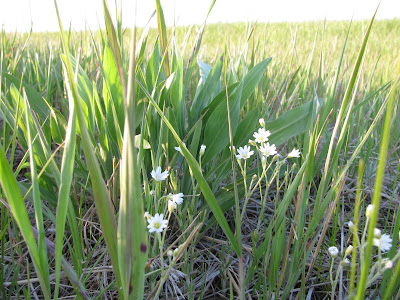 Common Chickweed really shines like hundreds of tiny stars in the grass at twilight. They must be having a private celebration every night. 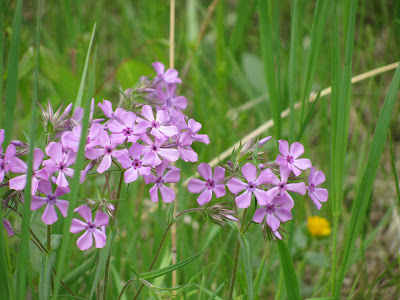 Wild Blue Phlox, I noticed a whole ditch full of them, vibrant, fresh into their birthday duds in the afternoon sunshine. Far Guy would not stop. I knew that I would never catch that scene again. Even though I was desperate to go back, it would not have been the same as THAT moment. The light would have changed...the moment was gone. I had to settle for the few along our driveway. I had waited patiently for him to do his errands, I rode along, to make sure Chance wouldn't get to hot in the car. It would have only taken a minute. His hours were way more important that day than my minute. Ten miles later he did offer to turn around and go back..but the moment was lost. 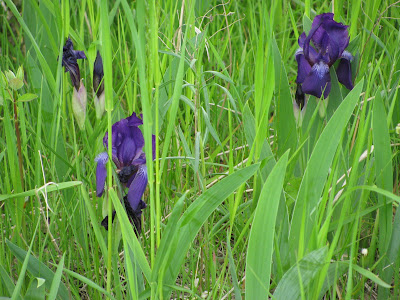 Wild Iris, she might have escaped from a pioneer housewife's garden years ago, she shows up in some of the strangest places. These have escaped from the cemetery into the ditch, were they running for their lives? Or just going to meet other Irises for a bigger party that would be noticed. There is a Stop sign here at this corner, some people actually stop here, some don't, some just do a pretend stop. While I was at the corner..they stopped, I may have even slowed some of the traffic "What is that old woman doing in the ditch anyway?" 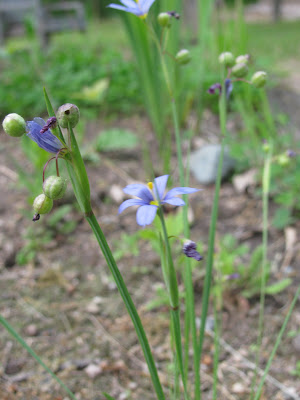 Blue eyed grass, such a sweet little thing, she is teeny tiny. She usually blooms earlier in June, this year she was a little late for her party..but had one anyway. She is a real challenge to photograph.
That is just five, I am sure that there were more. My Friend Aldo says ten per week, maybe even more ..well he would have been my friend if he had not up and died two years before I was born. I was not even a twinkle in my Fathers eyes yet..when the world lost a great Naturalist, who just happened to write my favorite book "A Sand County Almanac" Since I know this is not a book for everyone, I will just quote from it.
Prairie Birthday: During every week from April to September there are, on the average, ten wild plants coming into first bloom. In June as many as a dozen species may burst their buds on a single day. No man can heed all of the anniversaries; no man can ignore all of them. He who steps unseeing on May Dandelions may be hauled up short by August ragweed pollen; he who ignores the ruddy haze of April elms may skid his car on the fallen corollas of the catalpas. Tell me of what plant-birthday a man takes notice, and I shall tell you a good deal about his vocation, his hobbies, his hay fever, and the general level of his ecological education. " Aldo Leopold
What a guy! I bet he would have stopped for just a minute..a moment:)
Posted by Far Side of Fifty at 10:24 AM

Labels: blooming in mid june, life is unfair sometimes, prairie birthdays, really torked me off it only would have taken a minute, why the heck wouldn't far guy stop, wildflowers

Loved the photo. Since I am from the Prairie State of Illinois, I especially can appreciate this. Unfortunately we are much of out native prairie grasses and flowers.

I wish everyone would take the time to get in the ditch and appreciate the simplistic beauty of nature.

Oh how I wish I could type without typos. I was trying to type ... unfortunately we are losing much of our native prairie grasses and flowers.
Whewww-off to proof reading class now.
Have a great day Connie.

What a nice post, its nice to see the beauty in things where others dont look

The older I get, the more attention I pay to the small wonders and blessing in life. I love to walk around our woods in early a.m. or early evening searching for anything new that is blooming. Growing up we had an older man neighbor that was always "squatting" looking at his flowers. I remind myself of him!

It is true, we are losing so many of our wildflowers. Once they are gone....

You mentioned that the flower liked dry land, they sure won't love it here. BUT....upcountry it is super dry. Maybe one day I will sow some seeds up there.

I love our wildflowers here in Upper Michigan too..some are only blooming for less than a week, and are buried amongst the forest floor, but I love them...so I understand completely.
One man's weed is another person's flower!

What lovely wildflowers and thanks for capturing them so nicely. Thank you for your visit to my blog and the great compliment on my header.

You always find the prettiest little (and big) flowers! I don’t think I’ve ever seen the yellow one before. Very nice.

Thank you for your comments this morning.
To answer your question about the note –

“This one life will soon be past,
Only what’s done for Christ will last.
What are you doing with your one and only life?
God can use you to make a difference,
Just ask Him.”

It’s there as a reminder but I have to admit it doesn’t work very well. Even though I see it every morning, I forget it by the time I get to work! *sigh*

Can’t wait to see your peony shots! That was too funny!

Now I know what those little "beautiful" purple flowers are "wild blue phlox" - I see many of these while out horseback riding and always enjoy their bits of color! Now I can say I actually know what they are (except when that time comes around I probably won't remember the names). Very interesting entry -- I also can relate to Far Guy not stopping for the perfect picture -

Would love to go on a wild flower hunt with you.
We have chickweed here -- but it doesn't look anything like that. Maybe what we have is something else and I just think it is chickweed. When I was a kid a schoolmates mom (who was very bizarre) took chickweed and blended it into some kind of wicked mushy juice for her to drink.

My 13 year old grandson came home with me from California and we had a long list (a Scavenger hunt) of things to watch for on our 15 hour drive. One of the things was a man in a ditch wearing boots. Wish we'd seen you. heheh.

I also love Pamela's comment. A scavenger hunt of things to watch for on a long trip...that'll keep 'em busy and engaged!

Happy birthday to all those hardy yet beautiful prairie flowers!

Thanks everyone for your delightful comments!
Pamela, there are perhaps fifty different kinds of Chickweed..so yours may look different than the most common one here in Minnesota.
I also love the idea of a scavenger hunt with kids, especially on a long trip. I even like the idea for me..I am easily bored in a car..and want to stop often.
Duchess, Thanks for sharing your verse, I do so appreciate it! :)

What georgeous foilage you have been able to see. I haven't seen anything aroung here as beautiful as that. Lilly