My Dad is a very special man, he will be 83 years old later this year. He is very active and is happiest when he is sitting or working on some huge piece of construction machinery. He is retired but has two jobs, he works for my brother when another "Cat" operator is needed and he hauls seed potatoes in the spring and does the potato harvest in the fall. In between times, he has a garden, he reads and he plays bingo! He has restored a couple of old farm tractors just for fun and because he could. He tries to keep track of my Mother, who is always off volunteering her time for some great cause. My parents have been married for 58 years. 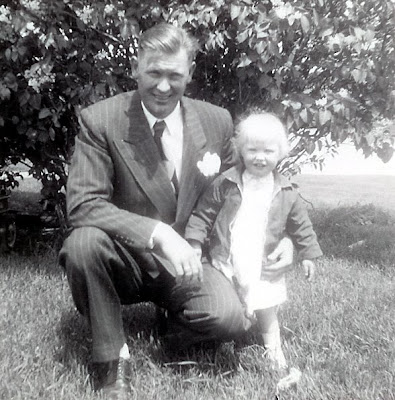 My Dad and me on June 06, 1953.. very close to his second Father's Day! He was headed to his brother Adolph's Wedding where he was the best man.
It is from my Dad that I got my love for reading, he also taught me how to shoot a rife and to hunt, and the finer points of the game of baseball. He stops by at least once a week just to visit. Dad is a survivor, he has survived the Korean War, he was in Korea when I was born. He survived Bladder Cancer back in 1986, when there were very few survivors of that particular form of Cancer. He also lives with Celiac Sprue which is a gluten intolerance. He has survived all of his brothers, he is the only boy left out of eleven, but he has two sisters who he visits quite regularly. Dad has four children ( I am the oldest), twelve grandchildren (two are my girls), and twelve great-grandchildren (five are my grandchildren). 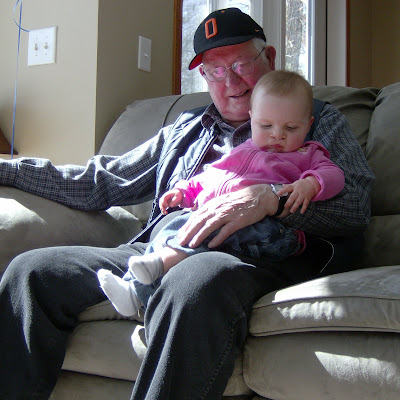 My Dad and Aubrey his youngest great-grandchild, two very special people in our family the oldest and the youngest..she will be booted from this spot in September when another Great-Grandchild joins our group. For now Aubrey shares the spotlight with her Great Grandpa! Happy 57th Fathers Day Dad! :)
Posted by Far Side of Fifty at 9:46 AM

Labels: because of me he became a father for the first time, my dad

Hi Connie, What a handsome man your father is and how wonderful that he stays busy and enjoys the family time so much. I wish all of you a very special Father's Day!

Connie, great to hear that your Dad is still very active, it shows how happy and contented he is in his face. Love the photos.

He looks hale and hearty -- and very happy!

I agree. Your dad is a hottie. He was a very handsome young man and sounds like someone I would like to know. I imagine he has a few stories!

I want to come sit and listen to your daddy tell you stories -- and get hugged, too.

What a great dad! I love the way he is so vibrant and active.