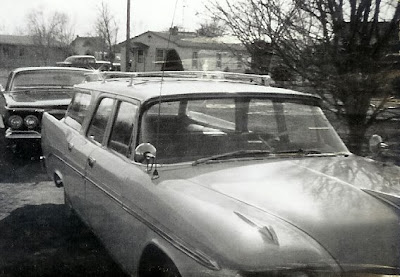 It was a 1959 Desoto Station Wagon, sea green although I called it mint green because it reminded me of the sickly green color of those square little mints that everyone used back them..they came in pink, white, green, maybe even yellow and they appeared at every function you attended. It had push button drive, the little square buttons were located on the dash to the left of the steering wheel. It was as big as a battleship and really hard to parallel park..but it did have power steering. It had a seat way in the back that faced backwards..handy if you want to see where you have been. It was purchased from Bob and Mary Harris sometime in 1967. Far Guy's Dad bought it, and Far Guy used it.
Far Guy was very proud of his car, he washed and waxed it, and took it into the Skelly Station for lots of repairs. There was only one mechanic by the name of Les that was allowed to work on her. Yes, she was a "her." One evening we were on our way someplace, and "her" oil warning light came on. This really upset Far Guy, he kept one eye on the light and one eye on the road..and was ignoring me. I am a fairly helpful person, so I popped my bubble gum out of my mouth and stuck it right into the instrument panel covering up the red oil light. I declared it fixed! We still didn't get to go on our date, unless you count a soda and a candy bar at the Skelly Station a date:)
Posted by Far Side of Fifty at 9:01 AM

Oh, I love it Connie! I well remember those mints (a staple at every wedding reception in the south!) and I can picture the color of the car. I love the bubble gum hiding the oil light - Far Guy must have been horrified.

Just think how much Chance would like to ride in the rear facing seat now!

Yes I remember those mints also. Giggle. And I liked them.

Funny story about the gum, a true fix it girl! thats what you are. LOL.

Oh, to have a color picture. I am a car buff, I would love to have that car (among many) and by the way, I love those mints. I make special stops at Cracker Barrel to get Peason's Butter Mints.

Love the car! Dad had a '63 Kingswood station wagon that was almost that big....

No wonder he married you, you keep him surprised and laughing and you help him out when things are important!

Old cars certainly were big in every way...nice to recall...Thanks for your visit...I will be back!

Connie~ You sure have a way of bringing up old memories! I just love it!

When hubby & I dated.....sometimes we got to use his parents Big Red Dodge or maybe it was a Chrysler......it also had push button drive! And it had a gas heater! Yes, it was the size of a fishing boat!

Those were the days when we pulled into the gas station.....my hubby knew EVERYONE there....and so it seemd EVERYONE also knew your business!

Great bygone times for sure!

It's one like my brother had. I always wanted to push the buttons but was never allowed. He also had one of those knobs you could fit onto your steering wheel to grab and spin the steering wheel with. Wasn't allowed to touch it either. I loved riding in that big bomber though.

What a photo! What a car! These wistful wednesday posts are some of my favorites of yours, Connie! :)

Ah, I laughed out loud... guess he really didn't appreciate your helpfulness if you still ended up at Skelly Station. :) And those mints, those nasty chalky mints... don't they still make those? I hate them! EW.

ewww I call those mints feces mints. Some lab tested those mints in the communal bowl at teh cash regaister once and said they contained more feces than a bathroom doorknob. I just about Erpppped! Just happy to share hahaha ewww sorry
Ruth

my dad used bubble gum to stop a leak on a gas tank once.

I remember those backward seats AND... we had a car with the silly push button drive, too