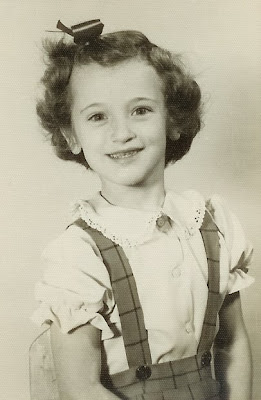 This is a photo of Far Guy's big sister Jan. She had a birthday last week, she got older. This photo was taken in 1951 when she was six years old.
Far Guy's sister is a retired teacher and lives far far away in southern Indiana with her husband of 41 years, and a dog named Ernie ..he is a Silky Terrier. They have one daughter who is unmarried..so they are not grandparents yet.
She is a pretty good sister, she only dropped Far Guy on his head once when he was little. She is a good sister in law even though sometimes I irritate her with my blog...not with this one though, I never actually mentioned how old she is. She is a good aunt, and our children were both spoiled rotten by her. When they were little she would visit and read to them for hours.
I chose this photo, because I think it is really cute. I wondered about her blouse and the skirt with shoulder straps, were they "store bought" or "homemade" Far Guys Mom was a very accomplished seamstress. The fancy collar on the blouse could have been made by her maternal Grandmother, or it may have been purchased and attached to the blouse. I believe the buttons and their placement say "homemade." The wool skirt with straps, was very typical of the early 1950's and very fashionable back then. A proper slip was a necessity as wool would make you very itchy:)
Posted by Far Side of Fifty at 9:12 AM

ICK! I remember wearing wool! Oh, ichey! You are so right a slip is a MUST and maybe even a undershirt.

This is a cute photo and if the clothes are homemade someone is a very good semstress!

That photo is adorable. I wore similar dresses and a slip was a must. She looks a lot like a young girl I use to babysit back in 1978.

Happy Birthday if your reading this.;D

That does bring back memories, my brother was recently cleaning out some drawers for my Mom and sent me some old pictures. They are so much fun to look at and wonder about.

What a precious photograph. I remember having a skirt/straps just like that and oh, how my skin hated wool (even with a slip!)

What a cheeky little smile she has - and I love that dress and shirt too...

That photo is adorable..what a beautiful smaile she has!
I remember wearing collars like that as a kid..
Julia ♥

She looks amazingly like a school picture of my husband's sister! Maybe they were twins at birth and got separated?

I love that school picture!!! How sweet is that? Look at that smile :)
I remember itchy wool dresses and having to wear them even in the summer.
Have a great day and........

Old photos are so neat. Last time the Duchess went to her Mother's, she was given a box of old slides. What a treasure trove! Now she has to scan them all into the computer so she can enjoy the pictures and share them with family.