Chance: Far Side is in a bad mood

Hey it is I Chance, the handsome blogging dog! Far Side is in a fairly bad mood, so I am taking over today. 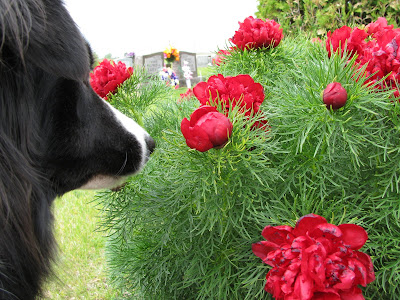 I think it began when she gave me a lecture at the peonies, she said "Look at this Chance, why do you suppose these peonies look crappy on this side of the plant? Frost in June, can you believe it, frost nipped these little buggers twice. " She has no idea why in the world we live in such a God forsaken place that freezes ten months out of the year. I wanted to remind her that it hasn't snowed in June..yet. So we got a little frost..she will get over it. 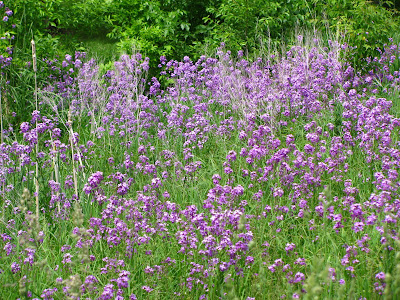 Then there was that dreadful day that Far Guy did not stop to photograph the Wild Blue Phlox, which turned out to be Dames Rocket anyway. This time he stopped a good long time and let her get all the photographs she wanted. Far Guy got out of the dog house that day. She even apologized for being a bit testy. I think they kissed and made up!
Then yesterday all heck broke loose. There is nothing that irritates Far Side more than someone that is not doing their job. I do my job all the time, and I stay out of the dog house. Far Guy does his job too, he is the cook. I would not want to be that person by the name of Judy, who made Far Side cuss a blue streak. Because Judy was not doing her job, another nice lady could not do her job, which made another man not able to do his job either. No one was doing their job, and I wanted to run inside and pee on their leg. But no dogs were allowed, besides that I was on my leash. Far Guy said "Let's get you the heck out of here! " After our long trip she took a really long stress induced nap, and when she woke up she barfed. I always feel better after I barf..so I am sure she will be fine. Far Side says that.. this should be applied to Judy's backside.
Far Side might be back tomorrow..if not you will be stuck with that lousy A Thousand Words idea she came up with. :(
Posted by Far Side of Fifty at 11:52 AM

Labels: Far Side is in a fairly bad mood, tomorrow will be a better day, why don't people do their jobs

Let me be the first to say I am doing MY job. My job is to tell you how handsome you are and to say how special you and Far Side are to us here at the castle. I hope she feels better soon.

Kisses for FAR SIDE!
Emma Rose

Chance please tell FarSide the flowers are beautiful! Just beautiful. Thank you for sharing. For awhile there I was afraid you were going to be in trouble because you widdled on one side of the peony bush so a little frost...better it that you okay.

Hey Chance,
My two dogs just got home from being in the kennel, they both were so hungry and very thirsty. It's a great kennel but I don't think they put them on continuous food and water. We don't schedule our feed at home so they were very much in need. Chance, your mom probably said that the fern leaf peony was a very special plant that you were visiting at the cemetery. Far Side helps me identify plants and I really appreciate it. I might share a root of that plant with her this fall when it cools down a little bit around her. I hope everyone has a better day today.

The flowers are beautiful. Chance take care of Far Side.

Go ahead and piddle on Judy. LOL.

Chance, you are a good boy! Tell Connie I hope she feels better soon and that we miss her.

Chance it is nice to give everyone a break sometimes. I liked your story and pictures very much. Make sure your Mom gives you lots of treats for being so good.

Chance...you're a pretty funny pooch! :) Tell your mom that the flowers look really lovely and that it's better having it chilly than it is hooooot as heck. Then, give her a soft nudge so she'll feel better.

I can think of many times that ol' harry's boots would come in handy for somebody's backside! I hope you felt a bit better after this entry --

Chance if I could only understand pooch language sometimes I would be so happy. Far Side is ok. Just a day when company is not a good idea.Frost is a nasty thing with summer on a couple of days away . lilly

You always make me laugh, Chance! Tell Far Side I hope things are looking sunny side up today!