Recently in the very wild weedy gardens, a Lupine had twins. Of course I photographed them. They began as one bloom and then something happened probably during the bud development, and two flower stalks formed where one is the norm. I used to know all the technical terms, after reading for some time, and just short of getting out some of my old textbooks I gave up and said "So what..forget the why, and enjoy the darn flower." Lupin or Lupine ( North American) ..both are correct spellings..at any rate they are beautiful plants. 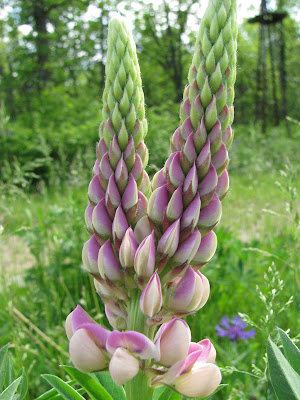 Twins were on my mind this morning, and I really didn't know why, until I looked at the calendar. Jen made me a special calendar this year, I like to keep track of birthdays, and anniversaries, so she made me a calendar that has photographs of special people and their special days. Two little very different faces occupy this day on my calendar. Five year old today faces, of my great nephews, fraternal twins, both look very different, both are unique individuals. The party is on Sunday! 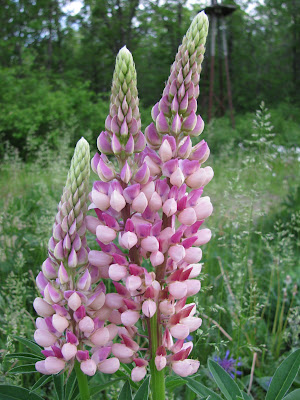 I have an Uncle and Aunt that are twins, my Grandmother gave birth to them two months after I was born, they are as different as night and day. I have twin cousins, they are not identical, but close enough that most people cannot tell them apart. Most people tell them apart by their wives, one married a blond, one a brunette. Far Guy's parents had twins, a boy and a girl back in 1942, they were born and died on the same day. It was very sad, and was not something they talked about very much. They lived in Omaha at the time, so not many relatives can even fill in the blanks. Our daughter Trica finally wrote and got their birth and death certificates.. we always wondered where the twins were buried. We still don't know, as the hospital took care of all the details. I guess years ago, they just did mass burials of babies that were born too soon. Far Guy's Dad got to see them, and he told me once that he held one of them, Far Guy's Mom was not awake, this was back when most Mother's were rendered unconscious for the birth of their children in hospitals. Philip Leroy lived for 2 hours, Elizabeth Ann for 6 hours and 13 minutes. Not nearly long enough, their dashes were short. Their dashes were hardly recognized, they were not listed when Far Guys Dad died, but the hand written obituary that Far Guy's Mom left behind included them. 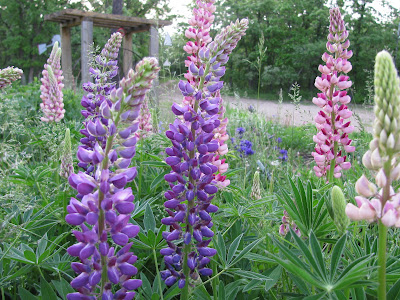 Abra a blogging friend, came up with the "dashes" she once wrote that it is what you do with your dash that is important, not the dates at the beginning or the end:) 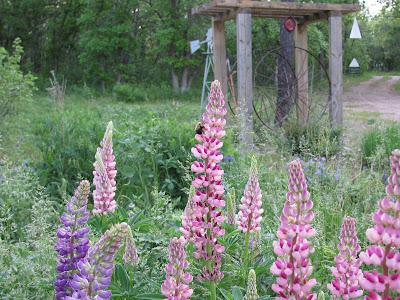 The twin Lupines are on the left in these last two photos, as usual click on them to see an enlarged view!
Posted by Far Side of Fifty at 11:18 AM

The flowers are lovely. I have never seen them before. And in the last one you captured a bee photo. Weren't you afraid since you are allergic to bee stings?

What beautiful flowers, ones that I seldom see here in GA. Very interesting story about twins in your family's too. So sad about the little ones and I like the "dash" story - that is so true. Hope you two are feeling well and have a nice weekend.

My wife and I would stay a week or so along the north shore and paint pictures. Our timing was never quite right and we would miss the lupines by a couple of weeks. Your plants are looking great. Those ladyslippers inspire me to paint one some day as an artwork. We always saw other artist's painting of the lupines and regretted never see them. You have a great back yard area. The colors are so rich and beautiful.

These are beautiful photos. The bumble bee is a bonus too :) What is the structure beyond the flowers? Something creative, no doubt!
You have a lot of twins in the family. We have one set, as far as I know. I always thought it would be fun to be a twin!
Have a great weekend -
The Duchess

I noticed in your profile that you said you were blogging partly to leave something for your grandchildren.

I have heard of websites that will turn a blog into a book, I don't recollect their urls. Also, I think you can download your blog thru your browser. I did this once with the blog of a friend who had passed away, but again the howto has vanished from my mind.

I would do something like this, in case blogspot vanishes or something, it would be a shame to lose what you have created.

Connie, these photos are absolutely gorgeous! You've made me homesick for Minnesota!

I have a pair of distant cousins who were identical twins. I could never tell them apart -- they were voted "most identical" at the Twinsburg festival one year. The judge commented that even the freckles on their knees were identical. They never married and were roommates and best friends their entire lives. They even worked at the same place. When they were about 50, one of them passed away and the other was devastated. I remember thinking that it must be like losing not only your sister, but, almost, your spouse.

My sister had twins,boy and a girl and they do not look anything alike. She also has an older son. Regretfully my younger sister passed away three years ago and that has really left a void in my life. lilly

Your Lupines are beautiful...you've captured a bee also...No twins in my family...but only after my father's death did I learn he had a sister die at birth...things weren't talked about I guess back then...so different now.

I do so love lupines. I had one in my Ohio backyard for a few years. Dumb me, I had to move it for a fence, and as you well know, they don't tolerate being moved well. It died. :-( I doubt a lupine would tolerate the Kansas heat.

And I love your comment about the dashes - that is so true!

Thank you everyone for your comments!
Rae, It was only one bee, and a big bumbly one, and he was more interested in the flowers than me! Yes, I am afraid of bees, especially when there is more than one, and they are wildly buzzing around me.
Karen Anne, My blog appears locally also, on a newspaper site. I believe if you are serious about saving something, you better have a backup. I have hard copies too but I am way behind on printing them out. I keep them in page protectors with the photos in three ring binders, I need to catch up, I am still back in December of 2008. Thanks for stopping by!
Duchess, Yes that is the entrance to the garden, the roses are supposed to be climbing up the wagon wheels..so far not so much luck with that project. Far Guy built it for me! :)

The lupins are blooming over here too! Gorgeous!

And twins and parties.. how delightful! Enjoy.

I love lupines and they grow wild along the highways and byways here in Maine. Twin lupines is very cool! Two of my favorite things about Lupines is 1: They smell like black pepper! and 2: Kids can pick those little buds and put them in a tiny box like jewels. Boy...you and Far Guy have twins on both sides. That is very sad about the twins that died. My mother comes from a family of 10 and 3 siblings died very young. Nice post...I am trying to catch up again!

Wow, a Siamese Twin Lupine! Amazing.
We have lupines here too...but I have never seen one like THAT!