Today I will share just a few stories about life out on the Carnival.

We did laundry every 7-10 days, the best laundrymats were sought out sometime during the week, some were just filthy, some had old machines that hardly washed anything. If we knew that the next spot had a great laundrymat we would wait 10 days. The best ones were always busy.  One day Edna (She and her husband Alva owned the Carnival) was in a laundrymat in Southern Minnesota.  Edna was busy washing, drying and folding when a lady came in and said “Better watch your laundry there is a carnival in town.” 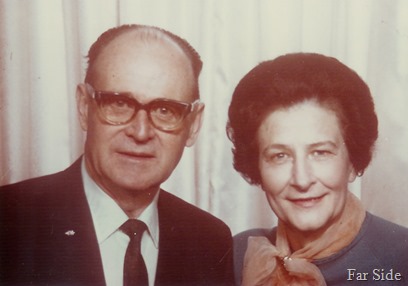 Al and Edna
Celebrations were free. County Fairs usually had an admission fee.  We were given passes and a pass to put on the car for the duration of the Fair.  Some fairgrounds were easy in and outs, one particular fairground gate (Northwood Iowa) was really slow…I waved my pass and pointed to the vehicle pass and swung around the stopped cars. My Mother in Law was with me, at that time she did not drive.  She said the old fat guy at the gate shook his cane at me and started to run after me but stopped…she said “You almost gave him a heart attack.”

Move day started early, after only a few hours of sleep for me, no sleep for others…sometimes Far Guy would still be tearing down rides at sunrise.  In the motor home the electricity was the first to go, then the water would be shut off and hoses rolled up. My Mother in Law always saved a glass of water for me, after getting dressed I would stand outside and brush my teeth, have a swig of water spit it out and splash the rest of the water on my face and I was good to go. I would hand her the empty glass and we would wait for the steps to be put inside and then go to the car.  She and I most always rode together.  The men would check the fridge and make sure it was switched to propane, put down the table and make sure that everything inside the motor home was secure.  Far Guy would take off to drive the Wheel Truck or The Slide.  We headed off toward the next town.  We always stopped on the right side of the road for breakfast, there could be a a dozen cafes on the left but we never stopped  at them.  I never did learn how to back up a trailer, both Far Guy and his Dad attempted to teach me how to back up a trailer…so my Father In Law never took me anyplace I had to back up…he picked cafes with parking right along the road or with roads that made a circle and back onto the highway…but never on the left side of the road. 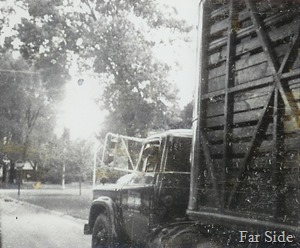 A ride truck
Pooping was a subject.  My Father In Law would say “There is time enough for pooping next winter.”

Mothballs.  Before I became a driver that would never go in reverse Far Guy was the driver.  My Father in Law would throw me three or four small brown paper bags.  Inside were dyed rabbits feet and a plastic bag with small gold chains.  As we traveled down the road I strung the rabbits feet…to this day if I smell mothballs I think of rabbits feet.

One of my fondest memories was at the end of the season in Schuyler Nebraska probably in 1970.  It had rained cats and dogs and there was a lightening storm so we were shut down early.  About 12 – 15 of us decided to go to a local cafe to eat.  We got there and started pushing tables together in the center of the dining room, there were booths and tables all around us filled with people.  We began to tell stories and laugh, pretty soon all the people in the other booths and tables and all the waitresses were laughing right along with us.  I cannot remember any of the stories told that night, but as I recall they were hilarious. Friends, old friends, not many of them alive anymore, but the time spent with them was priceless. 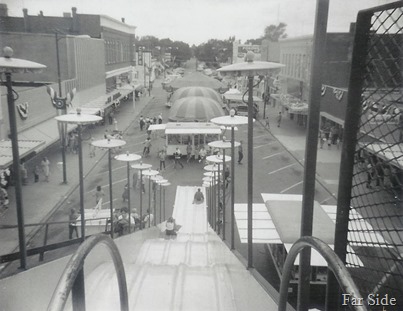 The Super Slide in Schuyler Nebraska. Note the Little Digger Joint on the right, at this time Far Guy was in charge of the slide, we would take turns seeing that Darrell (who was mentally handicapped) got lunch and bathroom breaks and that the drunks didn’t get too rowdy and try to come down the slide backwards or without gunny sacks.

What a different life! I so enjoy the stories about what it was like. You've had adventures galore and lived to write about them all. :-)

I love that you ate on the right side of the road! I don't know if it's a female thing or not but backing up is very difficult. Also, I don't mind making left turns but given a choice, I will run most of my errands in town in a counter-clockwise - logical - fashion so that I don't back-track and I am taking right-hand turns in and out of most businesses. If I can't do it that way, I will make sure there is a traffic light to assist with the left-hand turn - - - not an obsession but rather it makes the day simpler and goes with the flow.

Yes, you have had great adventures and are a good storyteller! On the right-hand turn matter, my dad was in the FBI and was trained that in a city with square blocks, they were required to take 3 right-hand turns instead of a left-hand turn, in that left-hand turns are more dangerous. And I cannot back up with a trailer, either. Impossible!

Sounds like some great memories and so nice of you to share them with us! Yes, backing up a trailer takes lots of practice....I'm not very good for sure!

I loved the story about the laundry mat. People need to be very sure what they are saying (and who they are saying it to)! I hope Edna told that woman she owned the carnival. Love these stories. I think I tell you that every time!!

She didn't say a word she just smiled:)

I really enjoy the carnival stories. I always found the life style to be so mysterious as I would attend carnivals I knew people who worked them had other lives but packing a moving seemed to be a major part of their lives. I had never seen the slide as a kid until the state fair in Iowa.