Bruce was from Ogden Iowa, he came out on the road after he graduated from High School.  Fresh faced hardly a whisker to be found, longish curly brown hair, he was lean and spry…and was always smiling.  He also had a bit of a sparkle in his eyes.   It was his dream to go out on the road…The Boss told him when he was old enough he could.

In 1970 we (Far Guy, Paul and I) took him under our wing.  He wasn’t old enough to drink although I think he may have enjoyed a beer or two.  None of us were habitual drinkers…we would occasionally have something.  No drugs.  So we were probably a good influence on Bruce.  He started out as the second man on the Scrambler.  He worked hard…we all did.

He watched and learned everything he could about every ride there was.  He sometimes strung wire for Kenny (the show electrician). He lived and breathed the Carnival Business.

The Carnival was his life, it seemed for a long time that he was married to it.  In later years he met Kathy and got married and they had two children, born and raised out on the road during the summer.  Kathy had a couple of joints…a Shoot the Star Out, Cork Guns and Speed Ball.   Bruce was the Ride Superintendent he was busy in Winter Quarters in the early spring, worked all Summer and Fall and come home a few months in the Winter. 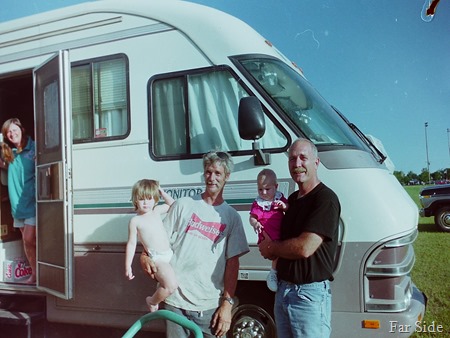 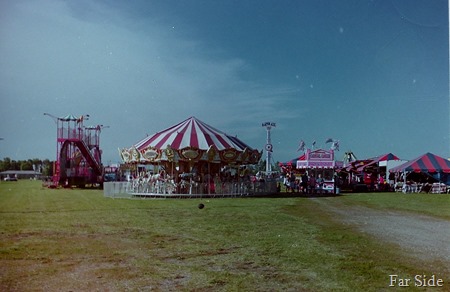 Front and center is the brand new Carousel, a million dollar ride made by the Chance Ride Company.  Barnesville Minnesota 1997.

Far Guy says:  Pocahontas Iowa tearing down the Scrambler, and a cop came by and told me to call my Mother In Law.  I found out that my good friend Danny Hawks had died in a car accident.  I was upset, started grabbing the pig iron by myself and tossing it into the truck… Bruce and Paul were having a hard time keeping up with me.  We got the Scrambler tore down in record time that night.  Bruce told Paul “I don’t think I am going to like that guy.” 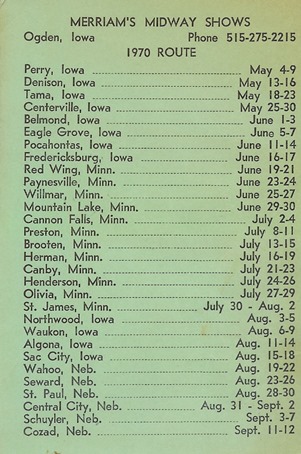 Bruce worked for Merriam’s Midway Shows until a couple of years ago.  He and his wife are now with a different show.   So we have not seen them in two years. 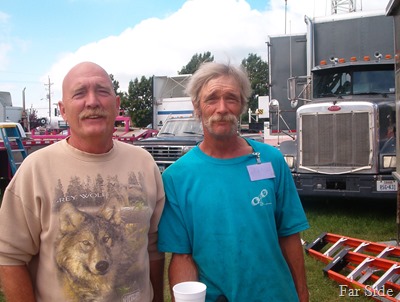 I never thought about how much a carrousel costs. I love them, but that's a lot of money. Interesting that Bruce knew what he wanted to do when he was a kid and is still doing it!

You and Far Guy met interesting people when you were with the carnivals.

Bruce was lucky to run into you guys early one. He looks like am interesting character. Thanks for introducing me to him. Your Midway memories are always fascinating. :-)

He looks like he has aged lots more than Far Guy who is older, you said? Glad you took him under your wings!

Ditto what Cynthia said. And that million dollar price of the carousel was from twenty years ago. Imagine what it would be today. What would the life expectancy of a circus carousel be?

Oops! I meant the life expectancy of a carnival carousel.

Merriams also have a Allan Hershell merry-go-round (not as fancy as a carousel) built in 1948 that they still use and is is in great shape.

Look forward to reading your Wednesday posts. You've given me a new perspective on carnivals.

How nice to have friends from when you were so young. They knew you when and have stories to share. :)

The midway looks so exotic! Something about carnival life that I find intriguing.
Looks like you have a bunch of snow this year, stay warm!!!

Love your stories of hard working people in a strange situation.