Russell was an Iowa boy, but loved Texas and called it his winter home. He had a tan to prove it!  Russell was a short little guy, he was what my Mother In Law would call a “sharp dresser.” Always neatly dressed usually in dress pants and a sport shirt.  He mostly wore glasses or sunglasses, he had dark hair and a really short butch hair cut.  Russell was a talker…he could talk to anyone anytime any place.  Russell was also “the patch” if someone felt they were hoodwinked into spending money Russell would talk to them until they figured out they spent their money all on their own.

In the summer Russell would be out on Merriam’s Midway Shows.  He had one trailer joint…it held two games a nickel roll and maybe darts?  He also had a set joint…a color wheel.  Now that was a fun joint.  There were squares of different colors on the counter and you put a quarter on a square…the ball was tossed into a large lacey hoop above the color wheel.  The wheel had pegs and what ever color the ball stopped on won.  A quarter got you a six pack package of gum…six of those six pack packages got you a stuffed animal.  Great fun!  Russell was a showman with a lingo all his own.

Blu, Rad, Blak,Gren, Yelo, Ornge, Brn…he never spelled the colors right…everyone laughed and he took their money.  On weekend nights he need an extra scooper so Margaret and Mike would come out and work for him.  One started from the left and one from the right…scooping up money and paying winners with gum and plush. Russell would just talk to the crowd. He was a Showman.

Far Guy says “ Before Russell had the Color Wheel he had an Over and Under.   You would rolls small rubber balls toward numbered slots.  You got six balls, if the the total was under eleven or over thirty you would win a Teddy Bear.  Every year in Algona Iowa it would be my job to go and win a Teddy Bear for the daughter of one of my Dad’s friends who lived in town.  I would go to Russell’s game and pay like everyone else, roll the balls, Russell would do a fast count and I would win the girl a Teddy Bear.”

One time a very well dressed lady brought out a little boy, the child sat on the counter while they visited…there was some speculation that Russell had a fling and a child that was well taken care of.

Russell had a brother named Marty who had a few kids, they would come out and work for Russell sometimes.  Jody was outgoing and Jackie was shy…they had a baby brother called little Marty.

Sadly Russell was murdered In Harlingen Texas in 1976.  He was robbed and shot in his workshop. We were all stunned, and saddened with the news. Russell was a good friend to many.   The murderers were caught, they stole a TV set and it was marked with Russell’s name. I am not sure how much time they got in prison.  What ever it was it was not long enough.

Marty took over and ran Russell’s joints.  Marty also bought both sets of Diggers from Far Guy’s parents when they retired.  Marty died in 1989. 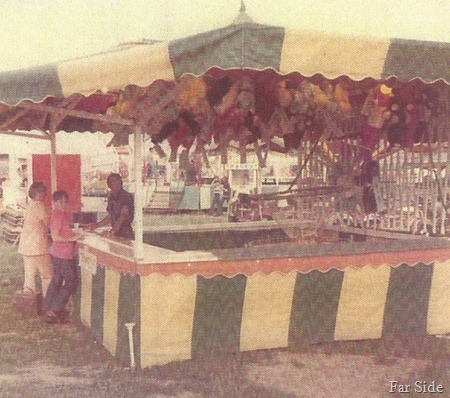 I love these memories of people and a way of life gone by. :-)

Oh, sad to think they are gone, and horrible about Russell. Neat story and I love the old photo!
xo
Lynn

Your memories are giving me a different perspective of the lifestyle. I'm enjoying your posts and photos.

I have always wondered about the lives of the people who ran the carnivals. I am so glad you do this series!

There were always some barkers that were extra charming and drew people in. Sad to hear he was killed over a TV. How sad.

He sounds like he was a real showman and what a shame to lose your life over a t.v.

The better show man you were, the more customers you got and held on to.

You really bring history to life through your stories. Thank you!