The two names Red and George kinda go together. The worked for Jack Thomas.  Jack had a whole string of joints on Merriam’s Midway Shows back in the 1960’s.  Jack Thomas was the only person I ever knew who put a lit cigarette in his mouth and the ash hung on until he was done with the whole cigarette…it was quite a show. Jack had a dark complexion and eyes, he was short and stocky…always with a cigarette.  His son was Little Jackie and in his mid teens…with dark curly hair and dark eyes.

Red was tall and had red hair what was left of it and freckles, his real name was George White but everyone called him Red.  Little George was short and lean with dark hair.  Red would wear polo shirts and George usually a white shirt.

Red and George were Flatties.  They ran joints where the win was controlled. One of them had a spindle…a wheel where there were prizes…and the G was in the cigar box that held the money.

If they could talk you out of all the money in your wallet they would.  They would give out some prizes, walking a fine line to stop complaints.  They worked the crowd and would give away a large piece of plush and cause lots of commotion to bring in more customers or “Marks.”   A large piece of plush walking the Midway was always good advertising and locals would ask “Where did they win that?”

When times were good they stayed in a Motel, on tear down night they slept in the car.

Red was a talker and told me lots of stories, I wish I could remember them.  I don’t recall where they were from, but they both had a good sense of humor and a liking for alcohol.

They left the show in 1969, not sure of the circumstances…Jack and Little Jackie Thomas left too.  They had Milk Bottles, Cork Guns, Spindle, String Game, a Bumper Car that stopped on a peg for a prize every time.  I cannot remember the wife/mothers name.

Red and George were in the Cambridge Minnesota fight between the jointees and ride boys Billy and Ron.  Billy ended up in the hospital and Ron ended up at the bottom of the stairs.

I wonder what ever became of Red and George?  I suppose I will never know. 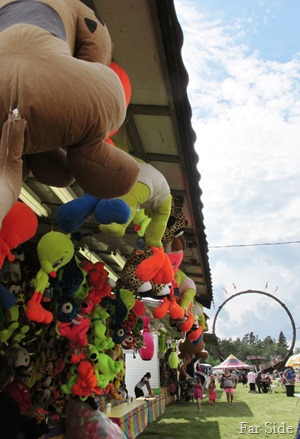 I remember when I went to fairs that I always noticed a "plush" and would ask where they won it. And sure enough, I'd go and spend some money at that place. Never won anything, though. I guess I was a good mark. :-)

Interesting people living on the edge like that but I guess they had to make a living too but as they used to say "cheaters never prosper"....not sure that's true though.

That's so funny about the cigarette with the ash hanging on. I've seen that many years ago too. And growing up, I never understood why those booths had all those big plush animals hanging all around and all I ever won was a black plastic comb. :)

My dad would always kid about NOT winning one of those huge stuffed animals at the fair because then he would have to carry it around all day!

Thanks for the up date on stroke, around here we need to
memorize that.
We may get a little showing of snow, it sure got cold.
Been in the 50 and 60's this past week.

For got to say, Bennie has been down in his hip.
Went to doctor, on meds if not better will have MRI.

Thanks for the update Pasty, my best to The Bennie :)

I'm always telling my grandson not to waste his money on those games. But he doesn't listen. I love these stories. My husband Richard had red hair. Many people called him Red too!

You might say these guys lived a rather nomadic life.