I wanted to include a family tree in the Grands folders.  I spent a good share of the afternoon yesterday finding a template I liked and entering the information.  It is a solid five generation tree, I have several birth and death dates yet to enter but it is printable as it is. I also made some copies for me going back to the 1790’s in Finland and 1812 in Germany for Far Guy. That would be seven generations back for the grands….but those parts will require much more research. If and when I get around to it…I will be able to hit the ground running…then on Far Guys side of his Mother’s family I believe there is an American Revolution Connection.  Of course I will have to prove it….someday our daughters may find it worth pursuing. 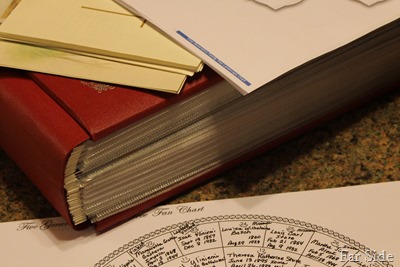 I used a Five Generation Fan Chart, some charts are confusing but I found this one easy to use and easy for a person to comprehend.  There are many Free Downloads out there.

I have a good start on the grands three ring binders.  I still have a few things to include. 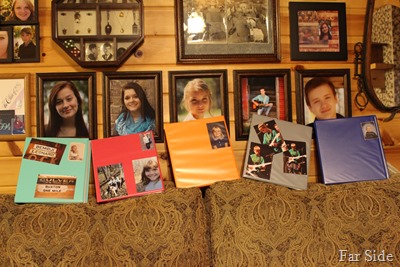 During one of my sorts, I found a packet with about 20 Graduation Photos of me!  Far Guy said “Put one in the grands folder!”  So I did.  I found some very interesting things that I saved from the grands, some made us laugh and I will be sharing them here on the blog at some time in the future.

My desk is still a mess.  Imagine that.  At one time so was the dining room table! 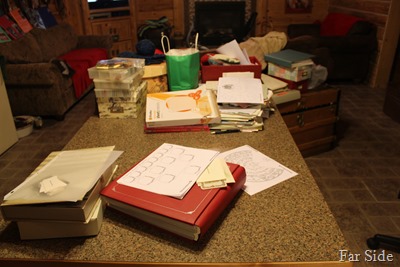 I need more three ring binders and so far I have used over 100 page protectors.

In my process of checking places for buttons for the button jar, I ended up cleaning out my sewing kit.  No more threads hanging out all over, no more threaded needles waiting to attach a button.  It is all neat and tidy.  Seam bindings, zippers and ric rack are headed to a garage sale.

I actually shredded some old photos…it is true.  Some old Graduation Photos bit the dust.  I kinda shuddered as I shredded them.  Along with those old photos many High School Memories were unearthed….many are in a pile to see if they give me good feelings…or not.  The decorations from my Graduation Cake ended up in the garbage…the tassel's and the diplomas were saved….not sure what for?  I guess for the children to throw out! Remember those name cards that you traded with other classmates?  We had three boxes between us.  The grands got ours and the rest were tossed.

I almost have the downstairs Christmas Decorations put away…not completely done yet…and the Shiny Brite tree is still up.  I admire it several times a day!

It is too cold to do much else but work on projects.

Your daughters and grandchildren are very fortunate. What a labor of love this is! We are to gradually warm up this week. Cold weather is not for me! Have a good day.

Your children and grand kids are very lucky you are putting these "treasure" chests together for them. Wish my mother had done something like that for me. Yes, all this cold weather has kept me indoors also but without the same results you have had. I've just been sitting on my behind. :( I'm happy you have managed to accomplish so much.

Keep up the good work. I'm thinking hard about getting started again on my own heaps of stuff that need to be sorted. I keep telling myself every bit of sorting and cleaning and organizing is a step forward. Tom keeps telling everyone he is afraid that I will toss him out whenever I start sorting and dumping.

Your Grands will treasure the binders and the memories they hold. Well done!

I still have my tassel and even the Pep Club buttons we handed out for homecoming games. I even have the pamphlets they handed out to us girls when we had to go the "THE" movie in fifth grade with our moms one night. Some silly stuff. Really! Those pamplets are a hoot! LOL!
You are really making progress! Got to feel so darn good!! They will appreciate all the loving work you have put into these. :)

I think the Daughters of the Revolution connection is always very interesting! We don't have that with my family. You are certainly very organized. Happy New Year!

Oops, I had Daughters of the American Revolution first, and then meant to delete the Daughters part and didn't get that right. Maybe I should have stayed on my blogging break!

What a great idea for your grandchildren! I also love your photo wall behind them. That is awesome that you can go back that far in your family....1700's...amazing. I have a feeling that it will get harder for families to keep track of relatives even with all the new technology simply because people move around so much and most digital pictures aren't labeled and never come out of the camera except on an SD card. But, of course, that's not our problem! LOL!

I have Family tree books yet to fill out.
You inspire me.

You're working on two difficult projects. sorting is a big job but discarding things is difficult. You're a good example for the rest of us.

You've inspired me to tidy up my sewing kit on this chilly icy day!!

I am at the end of my line, no one to pass stuff on to unless you count cousins. Guess that will give me more free time!

I love the idea of the binders for your grandchildren. I have a feeling they will be treasured for generations.

The "good" thing about winter is it gives you time to do all these projects because as you said, you can't go outside - - - unless you're an ice fisherman or a skier - - and that stuff is for younger people don't you think?
Also regarding the picture of the messy table/desk - - - it isn't really messy cuz you have lots of empty places and the stacks look well-organized!!!

Looks like you are making a lot of progress, and having fun too!

What an inspiration you are making those binders for your grandchildren! I would love to do something like that as well. I am just starting the massive project of scanning all my photos. I ordered some special acid free containers to sort and hold them but I hope to scan them all first. I have a lifetime of photos, memories and items I hope to get organized so I don't just leave a big mess for my kids. It can all be so overwhelming!

A huge, but awesome project. Like all of yours are :-).

Whereas it's a good idea to cut down on stuff, it's a shock to actually shred something—so final! Sounds like a huge, but worthwhile project!

You've been BUSY! I like the fan chart and may have to look into that. I've been wanting to do a better chart of our family tree, just haven't found what I'm looking for yet. Have everything in ancestry but would like to get it reproduced as well since family hasn't ever been able to get into that site to see it. I dug up a connection to the American Revolution - on my Dad's side which was super cool. Everyone else though immigrated so our history is overseas.

I love the idea of a binder for each of the grandchildren. Maybe that is what I should work on here........someday! I have boxes of family pictures from my husband that I have no idea who they are. And no one in his family seems to interested. I guess I will toss them out. I can't find the nerve to do it yet!