I got a nice note and a photo via Facebook Private Message. 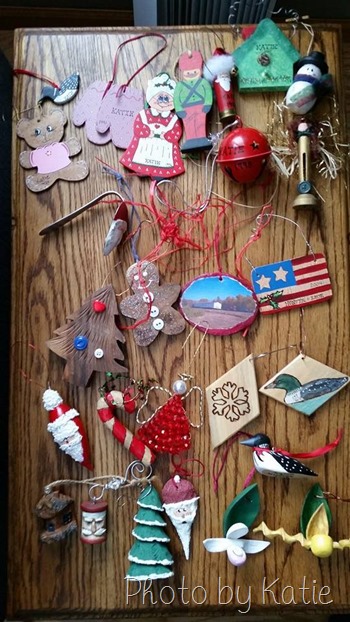 Thinking of you guys today as I pack away my favorite ornaments! Hope you are doing good!  Katie

These are all ornaments that we have made over the years…beginning back in 1990 the Loon top left was the first ornament.  The small bear with the pink shirt is an ornament that my Mom gave her grandchildren in 1989.

1998 a shell that smelled…Katie is missing this one…mine is in the garage someday I will get the box of sea shells down and make her another one.  After 19 years they shouldn’t smell any more!

2001 a black walnut tree with buttons

2003 a decoupage photo..everyone was different ( Katie’s was a photo of them on one side and a photo of the day their trailer moved in next door on the other side.

2008 a snowflake design burned into a piece of basswood

2009 a loon wood burned and painted

2011 a basswood spool with a hand carved santa face

I have two ideas in mind for next years ornaments they are both carved.  One I have carved previously…one is just an idea.

It was fun to see all the ornaments together.  Katie is my niece who used to live next door but has moved far far away to North Dakota…and she took the twins and Aubrey with her!   I miss her and her children.  Her husband works in the Oil Patch. 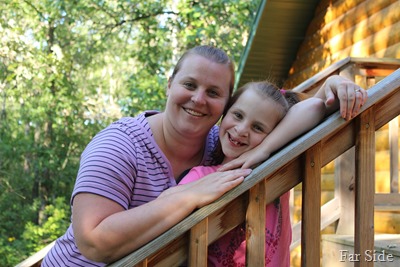 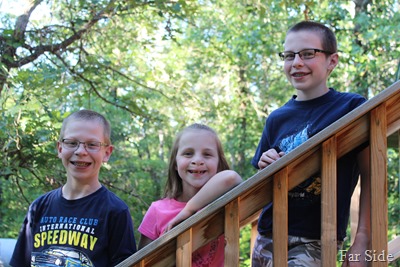 I remember Katie and children! Wow, such a great collection of ornaments and it's fun to see your list thru the years. Hope you have a nice day.

That was so sweet of your niece to do that. Precious memories.

How fun to see your ornaments down through the years. I have some doozies my children made. So beautiful in their minds, now sweet memories and laughs.

They are simply beautiful! And to have a collection of all of them is priceless. Thanks for the list from over the years. :-)

So Interesting to see such creativity over the span of years! And so nice that your niece values them.

I loved seeing the ornaments through the years. The picture is a testament to your creativity. I bet you didn't realize what a tradition you had begun Running Circles Around Tuckerat back in 1990!

It's satisfying when someone treasures the things you make. I'm thrilled that Katie sent the photo and the message. She's a keeper!

I'll bet you miss them! It's so hard to have kids move long ways away. Sigh!

Oh wow! That's really something to see all of these at once!! A lot of work and a lot of love there. :)

That is a nice collection. I guess I really didn't know haw far back it was when you started the making of ornaments. We got the bulk of our living room ones put away today. It is too cold to discuss.

Those ornaments are amazing. Time flies, doesn't it!

Nice assortment of ornaments you've made over the years.

Sweet collection of ornaments! As I was putting the last of ours away today, I separated my son's out, thinking that he may have his own tree next Christmas. In 2002 I started giving my two kids a somewhat personalized one each year, with the date on it, and maybe a brief mention of an important event in their life that year. I missed a couple of years recently, but managed to date one for this year.

That was fun seeing all the ornaments you have made through the years. I had been wondering what they were.

I think you outdid yourself with this year's ornament!

That was sweet of your niece to send a photo of them all. And your ornament timeline is impressive!

What lovely ornaments! Hope all is well.

What a great display of all your handmade ornaments! It was nice to see all the ones you've made over the years. You gave me some ideas too although I won't be doing hand carving anytime soon! LOL!