Change is sometimes difficult and hard to watch.

We pass by Far Guy’s  parents old home on the way into town.  There is no avoiding it.  Far Guy came home there in 1950 fresh out of the hospital. His parents lived there until 1994 when they moved into an apartment building so they could avoid snow removal and lawn mowing.

I am not sure exactly when they purchased this home…sometime 1947-1949 it was brand new. 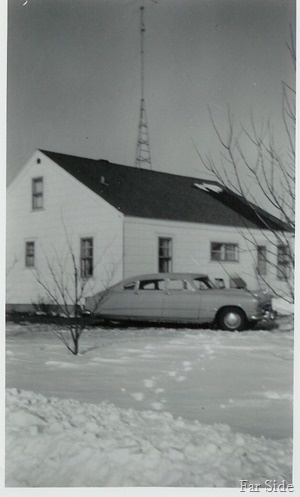 Last summer the house was sold and has been in the process of a renovation.  First they dug under the house and put as far as we could tell three new basement walls.  They tore off siding, shingles and replaced windows. 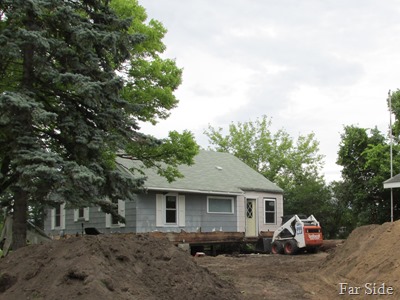 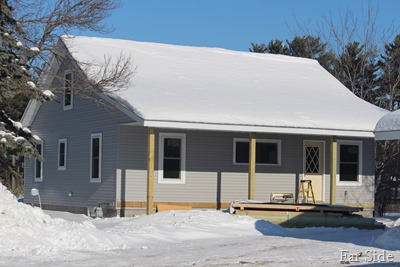 Yesterday we drove by and stopped for a photo, it looks like they will add a back porch. 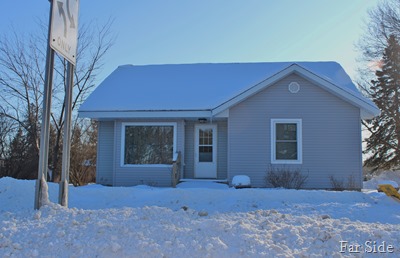 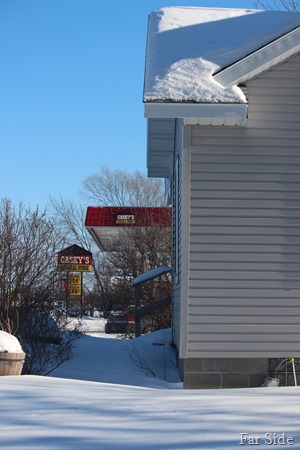 The old neighborhood is gone, next door is a Casey’s. Taskey’s old place with the teeny tiny  cabins, Larson’s place with a garage out back and Eddie Andrew’s place with the back porch covered with vines...all gone.  The house that used to be Brills is still there on the other end of the block.

Nearly everytime we go to town we notice the old water tower is missing from the skyline.  We also watch what is happening at the old house.  Most of the Summer and Fall it was an eyesore…finally it is looking better.

I loved seeing the old photo with the car out front. My old hometown and the home I grew up in have changed so much. When we visit the cemetery there it is difficult to drive down the street - all of the precious neighbors have died now. Maybe one day you and FG can see inside the old homeplace.

Love the old photo of the house. Most times I try to avoid driving by the old house where I grew up. It makes me sad to see how the old neighborhood has changed.

I think the house is looking cute, now. Better than with all of the piles of dirt around it. Just think of the expense they endured to put in the new foundation!
I find that I grow less tolerant of change as I get older.

I've always envied my husband - we live in the town he grew up in, where he constantly runs into classmates from elementary or high school. Everywhere I've ever lived is far away. But then again I don't have to see people changing my grandparents' house -it stays exactly the same in my mind.

After my childhood home & farm were sold in the nineties, I've only driven by two times. It's too painful to see nearly everything is gone, erasing any tangible connections to my memories.

We try to drive different routes into town to see the changes...some are good, some not so good.

Time marches on. We sold our first house and built a new one in the woods next door. I'm still ticked about the sodding of all my gardens. Mrs. T remind me I don't own it anymore. :(

I agree with you that change can be difficult and hard to watch. I have not been back to my hometown since my mother sold the house. It will help me keep my memories intact. I have to say this about your water tower coming down . . . your series of photos as it fell was AWESOME!

We have a woman in our town that buys up a lot of houses and remodels them. Some are remarkable transformations and others not changed that much. She sells, rents and is always busy. It really is a good service to the town. Far Guys home is almost transformed into a modern house.

It is sad, in a way. But at least someone has made it into something prettier. My grandmother's old home is falling down, and I remember how I loved that place.

The old place is definitely transformed. I rather like it. I know that the house I grew up in is still being lived in. I wonder if it's been changed at all. Since I doubt I'll ever go back I won't know.

It is sad to see the old places of our past change and go away. It looks like this house will make a nice home for a new family and that is good. My strongest attachment growing up was to my Grandmother's house which has been gone for a long time now. Despite that I still find myself looking it up on Google Maps (it's in a different state from where I live) just to see what is there now. I still somehow connect to that piece of land.

It is hard to see things change.....I want to go back not forward.

Things change and sometimes rapidly. I don't go home very often but there are always changes.

It's very different today, but that doesn't mean it's better or worse. Just different. :-)

I don't live where I grew up, but I have lived in my adopted city for 54 years. In the suburbs or the city change happens often and quickly. I really appreciate it when I see an old place being redesigned and reused, rather than bulldozed.

The house is looking good though - it probably needed renovating, especially the basement due to damp. The previous owners had a leak in the basement of our new house and replaced all of the walls and floors before selling, so a good idea to do it before it's too late...

Change is so hard! But the house is looking nice!

I loved the photo of the old house and the Hudson. We had a '48 Hudson - but not a Hornet! "The car you step down into, not up on." Ad from the time.
Thanks for all your photos!

I'm always so impressed with your photos. Such a precious glimpse into the past! Thank you for making these available to us.