I have collected marbles for years.  They are small and don’t take up much space.

Yesterday there was a package in the mail for me…a slingshot and marbles for ammunition to shoot down Far Guy’s Gyrocopter when it attacks me.

I used to play marbles with my brother all the time.  The Orange/White/ Green and Orange/White/ Brown are from the1950’s. As I swirled those marbles between my fingers it brought back many old memories.  Playtime was simple back then… we would play marbles for hours.  I can still remember the excitement when I would capture one of my brothers prized marbles. 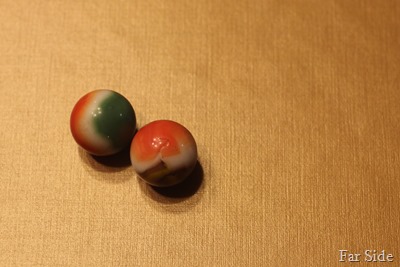 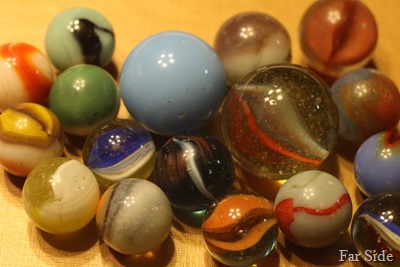 These are all very old marbles, I was very impressed with the two shooters! 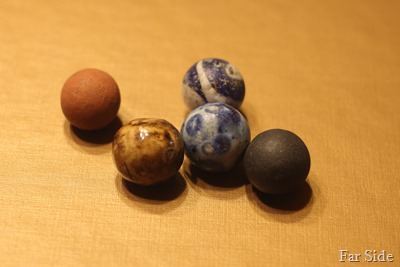 I had to make room for this windfall of marbles.  I decided that the dice which are also small and easily collected needed to go to a different container and these marbles needed their own jar. 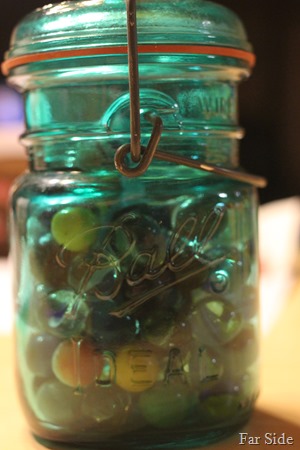 They fit nicely in the jar along with a note that tells about them.

Far Guy says : I had a tin full of marbles, cousin Jay and I sat at the top of the steps upstairs at the house in Park Rapids.  We rolled them down the wooden steps one at a time, plink plink plink on the wooden steps.  One of our parents yelled “I don’t want to hear ONE more marble come down the steps.” …so we dumped the whole tin at once!

I asked him if he recalled the punishment he replied “nope.”

Sister and I enjoyed playing marbles when we were kids. I like your collection very much. Cute story from FG!

I always played with marbles while growing up. My brother had an awesome collection. Love your slingshot and marbles for shooting down Far Guy gyrocopter. haha

I was never allowed to play marbles because they were for the boys. I played jacks instead. But I sure remember those marbles the boys played with. Beautiful "puries." :-)

Yep, I love playing with marbles and can still recall the shoebox where I kept them. Too bad for today's youth.

Loved playing marbles when I was a kid. Had a fruitcake tin full of them. When I was teaching our school had Marble Month every year in March and kids could bring their marbles and play, it was wonderful.

Some people will collect anything!!! Each thing you collect tells you a story as you research it's history.

Good thing you have some extra containers...so you don't lose them ;-).

I used to play marbles with my brothers growing up. They are so pretty!

No way are you "losing your marbles!" Couldn't resist.

I have a few marbles from childhood, but is wish I had my bag of Jacks.

Terry's Dad had a huge collection of marbles dating clear back to 1900. Sadly they were 'pitched' by Terry's Mom after Jack died. She was sick of them hanging around. Made me and my children so sad...marbles that old and much loved should have been passed down to someone who would enjoy them. Or sold, or given to a museum. sigh!

I still have a few marbles too (besides the ones in my head!), including the one my first boyfriend gave me in third grade. I doubt my grandsons have ever played marbles. Too bad.

I have quite a jar of marbles that I've collected along the way. The little guy plays with them sometimes or he arranges them according to colour. Then he gets tired of the game and together we make sure we put them all back in the jar lest I step on one and go flying!

As soon as I saw the marbles I thought about my brother, and the 1950's. He played marbles. My sister and I played with jacks and we all played with pick-up-sticks. Kids today are missing so much.

I didn't play marbles much, but I certainly remember watching others play at recess. I have a marble bag full of old marbles that I think came from Tom's parents house.

My marbles would roll down the whole living room from end to end because the house was old and had settled. I would open my farm gates at the one end and they all left the fence to go rolling into the field. I like the older ones best.

I sort of remember playing with marbles, in England I think. Something to do with a hole scooped in the dirt....?

A circle in the dirt usually, marbles are inside the circle. Then you take turns using your shooter to knock marbles out of the circle and capture them:)

I played marbles big time when I was a kid....I was also a tomboy so it was way better than dolls, I thought they were silly. I had a whole collection and I also remember "steelies" which were probably just ball bearings but we thought they were really special. I have no recollection of what happened to mine....probably confiscated by my cousin when I went home at the end of the summer. I did find some in a little jar in an antique store that weren't too pricey so I bought them just "for old times sake" and my grands got into them this past summer and I am still finding them occasionally under furniture or Miss Peeps discovers them. I love Far Guy's story...."not one marble"...so he sent the whole box.....too funny! Smart kid!

Like you and many others, I too remember the game of marbles. I still have a small collection of "Cats Eye" marbles in a glass jar here in the computer room. Lot's of memories playing this game from long ago. Kids these day's have no idea what they are or what they were used for. We do.

I love old marbles! I have several little jars of them in the shop.
xo
Lynn