Far Guy spent every summer from when he was a little boy until he went into the United States Air Force in 1973 on the Carnival with his parents. 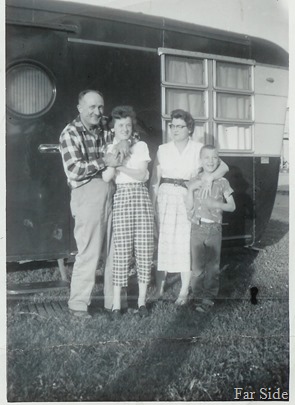 Far Guy with his parents and his sister

I am hopeful that I can explain how close knit that group of Carnies were.  I am not sure it was like that on all carnivals, but on Merriam’s Midway Shows it was.  Many kids were born and raised on the Midway.  Everyone watched out for everyone else especially the children. You might have had words with someone the day before but when it came down to it you had each others back and best interests at heart.  You were family. 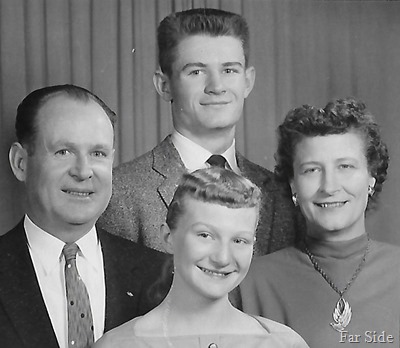 Far Guy was stuck between two totally different cultures.  One with many freedoms and one with rules and structure.  He had to adjust to life at school after being gone all summer.  He couldn’t play football, practice started before he got home the day after Labor Day.  Many times he would come home without his parents to start school.  His sister being five years older often times stayed with a friend.   He was stuck with his Grandparents out on the farm, sweet old Hazel who always cooked him soup (which he hated) or Orville and Marge who wouldn’t let him leave their property.  It was a hard transition.  I was his first girlfriend to make it a whole summer without dumping him.

Often times Far Guy would come home in the Fall and have to immediately clear his name.  He would be accused of things that happened over the summer when he wasn’t even in the State.  One time, he just got home and was immediately questioned by the Cops about an incident that happened the week before.   People in the community especially teachers always expected the worst of him…it wasn’t fair. 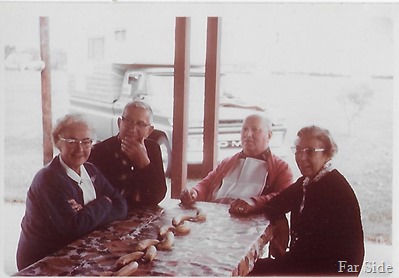 Howard T and his wife (Caramel Apples and Popcorn) and Oddie (Otis) S and his wife (Cotton Candy)
Carnival workers and ride boys influenced who he is today.  He learned many things from many people. 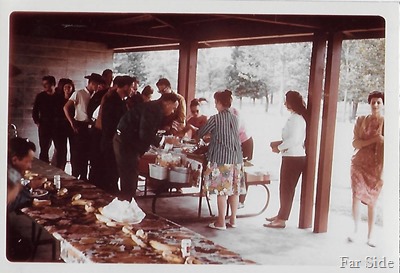 The show used to open every day with the music to “ Back In The Saddle Again” I will share the first verse.

I love these posts. When I was a kid my grandparents lived right across from the park where a carnival came to town a couple times a year. My grandma was the sweetest person in the world and would even feed bindlestiffs who came to her door (she spoke Norwegian) from the train tracks down the street. Anyway, when the carnival came she locked the doors and kept us inside. The perception was that "carnival people stole". You have shown a very different view and I love these stories. The song is a perfect ending for this post!

I feel like I know Far Guy's whole life story, and it's a good one. He has been a friend to so many. That's quite a list of people who raised him to be who he is today. :-)

I grew up in Portland Oregon and in rural Washington state the people who worked the carnivals loved to go to school and were discriminated against a lot..I thought that ridiculous, they worked a lot harder than others I knew, berry picking and babysitting was the other jobs and we always went home to our families who were actually at home, albeit I lost my Mom early in life, I had my other relatives to help raise me, I was out on my own at barley 18 traveled all the way by myself to san diego to my elderly grandmother who only lived 3 1/2 years and I was left all alone..I have found the kindness of strangers who worked like hell at being a carney person and other jobs a lot in our country pooh pooh about wonderful and would never ever judge a person by an honest living..Too bad our country has changed it's opinions sadly about human beings who work damn hard for a living. Love your blog, you & your husband sound like the salt of the earth..happy valentines day, lunar new year!

It's been a fascinating look into a big part of Far Guy's and your life. Obviously all those people did a great job of raising him to be a good man. Like they say...It takes a village....

Whoever ran that carnival wa a master with employee relations. there must have been great rapport.

There is nothing like travel to broaden one's perspective and open their minds. Too many people don't get that opportunity and then they become rigid and not accepting of others who are different than them. What a wonderful education....probably better than the one he got in school! Great memories and thanks for sharing them!