Photos, Genealogy and a Mystery

I have been working on some old photos, I found a whole packet of photos that needed to be sorted and marked with the year and the complete names.  Also found some more stuff for the grands memory binders.

Found quite a few old graduation photos of Far Guy so the grands will each get one of those too.

Then I needed a small all day project.  My other baby brother asked for a copy of the family trees I have been working on.  I decided to work another leg or an arm…

Lucked out and found an old obit for my GG Grandmother Christina who died on June 25 1918.  Obituaries are a wealth of information…if it is correct.  So off I went to verify information …there were two typos in the obit (transcribers make errors too).

Christina married name Kuhn maiden name unknown was born Feb 5 1847 in  Germany…wish I knew where??  Her husband must have been Fritz Kuhn born Dec 20 1843 and died April 13 1910 they are buried next to each other... and I found Census Records for them. They had at least 8 children in Germany:  Robert, Otto, William, Albert, Hadwig, Elsie, Frank and a unknown.   They immigrated in1884 with children 17 years - 2 years old. That must have been some trip.  Lena was born in Kansas in 1885. (Hadwig and Elsie were twins…many times twins did not live the births were difficult because usually one twin was breech…many times the babies and the Mothers all died.)

Well anyways I figured out where most of the children are or were.  Bits and pieces fit together nicely for me…a name is just a name but I have some old photos of these people that my Mother has shared with me.  Those old photos are all marked with names.

But I still have a mystery to solve:

A number of years ago my Mother gave me two CDV albums.  Mom cannot remember who they came from…just from family. One is from Germany and the other is clearly from the Glanders because Grandma Anderson is in that album and possibly even my Grandmother.  I will scan the photos and enlarge them so my Mother can look at them. 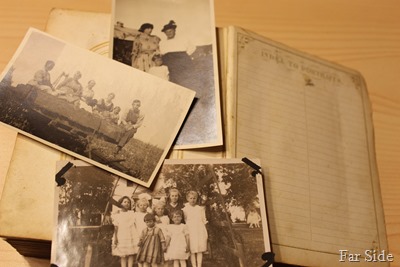 None of these photos are marked….even though the album had a spot to list the photos. 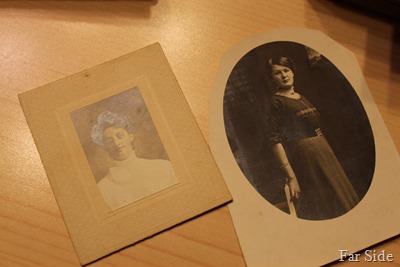 These two gals look like my Aunt Skip and my cousin Linda…distant relatives sometimes have the same features.

I believe that Christina may have kept the other album.  She was from Germany.  Hadwig and Elsie were born in either Wartenberg or Stuttgart depending on what reference you believe.  Those towns are 475 miles from Bremen and Bremerhaven (Bremen Harbour) where most of these photos were taken. Did Christina live in Bremen before she was married?  She was married sometime before 1870..possibly 1869 (first baby born in 1870)

I wish I had a photo of her. 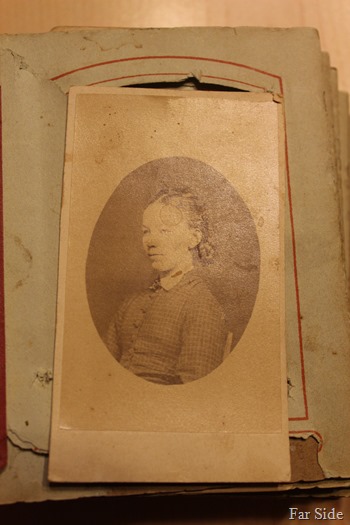 The first photo in the album…usually the album owner puts their photo in the first page.   Could this be Christina?  I am not certain we will ever know.

There are many cousin look alikes in this album These two look like Cousins Deb and Danny…most certainly relatives.

There are four branches that this last album could come from.

Falnes…they were from Norway. Highly unlikely that she would have an album photographed in Germany.

Glander…German born but highly unlikely….but still a possibility.   GG Grandpa Johann must have had a wife…I have no idea what her name was.  He was born in 1827 and that makes his wife a tad old to have CDV’s from 1860-1870.

Drewes…The name was given to a young man either he was orphaned or he was not wanted by his family.  His name was Christian Hyer or Higher before he took the Drewes name at his confirmation in 1884 in Wolcottsville NY.  Not likely that he had a photo album. Was he really German? Who knows.

Kuhn…Christina born in Germany in 1847…the most plausible conclusion.

It will probably remain a mystery.  I will put a note in each album with my thoughts.

My brain is mush after a day of research, tomorrow I will transcrible all my notes into something readable. Please mark your old photos with whole names and the year…the four W’s is the best who, when, where and why.

I feel your frustration. After my grandmother died we had no one to tell us who some of the people in the photos were. My mother did her best to remember. Now we are dealing with the same problem on my hubby's side of the family. Pleas remember to label photographs. Even on the computer label them. Good luck with this project.

I have w folder of "we''ll never know" photos. I wish I knew their stories as they look like such interesting people. I hope your persistence pays off.

My parents had a whole foot locker filled with photos, most of whom were strangers to us. And although we went through them numerous times, I don't know what my sisters did with the ones we didn't recognize. My brother's wife probably took them, she's like you and loves genealogy. :-)

I can imagine that all of that info and investigation is overwhelming. Your family is very fortunate that you spend so many hours on these important photographs.

Don't know if it helps but Stuttgart is in the German state of Baden Wurttemburg.

So much fascinating family history!

Mysteries like that that ar so close to a solution are frustrating and hard to give up on.

Very interesting. I have inherited a lot of very old pictures of people I don't know. I can't decide if I want to keep them or not. No one in the family is interested in trying to find our who they are! Sad that they weren't labeled!

We have the good fortune of having a Mennonite Historical Society locally. They have a great deal of information that they make available to anyone seeking their genealogy. They even print it out for you. So I now have the info on both of my parents families back to 1740's. Unfortunately they don't have photos. I have some but would have liked to have many more.

I hope you get to solve the mysteries. The thing about the older photos not being labeled is that no one is left to help ID and with fewer photos taken back then, maybe an ID for the photo lost forever. Good luck!

Thanks for the reminder to label photos! I am now knee deep in organizing, labeling and scanning old photos. It is a massive job but my goal for 2017. I am finding that organizing and labeling takes longer than the scanning. If only I would have labeled those old photos at the time....

Tom is our genealogist. He has done a lot of work acquiring photographs and entering them into his database.We also have quite a collection of ancestor photographs, labeled, framed and hung in our entry hall and stairwell.

What a wonderful treasure to have all those old photos...even if you don't yet know who they all are! Hopefully, some clues will shake loose and give you some leads!

Good advice about documenting photos. I had a cousin who married a Kuhn, I can't remember where he was from but I think it was Illinois as he dated her in my home town and he wasn't from Hanover, IL I don't think but maybe a town close by.

You've probably already found this info but just in case
Christina Wellberg or Kristina Wollenberg - according to Familysearch.org. Used Fritz Kuhn to search and came up with Fritz Michael Kuhn as the male to either of those names and children matched. He was born Germany 1843. Died Minnesota 1910 and buried Spruce Grove. Children tally as well.