This week whislt looking for something else I found some old World War II Ration Books.  I thought they were interesting and wondered what they were for.  I did a little research that made me thankful for food in the pantry and in the freezer.

When times are tough, Americans have proved that they can do without.

Book Number One was known as the “sugar book.”  Sugar was the first thing to be rationed in May of 1942.  You were allowed 12 ounces per week per person. ( 1 1/2 cups) Most cookie recipes call for more sugar than that.

In the sugar book were also coupons for coffee and one for one pair of shoes.

In this book that Far Guy’s Dad saved were three coupons left all for coffee. Stamps 19-28 were for one pound of coffee a week, Number 17 was for one pair of shoes good from June 16 –Oct 31 1943.  The rest were sugar coupons.

There was a local tire board, if you needed a tire you had to go ask to purchase one.  Gasoline was rationed, you were allowed 3 or 4 gallons a week.  Car sales were stopped, then typewriters and bicycles…factories went into War Production.  The war effort needed typewriters because that was their way of communication.

In 1942 and 1943 things would get worse, many more items were rationed, coal and heating fuel, nylons, cooking oils, meat and all canned or bottled foods.  Babies were allowed milk products but they had to have a ration booklet.

You had to apply for a ration booklet and it would be mailed to you.  The newspapers published times and date of which coupons were good and when.  You had to keep all the coupons in the booklet until paying for items…no lose coupons were allowed.  The Office of Price Administration had many rules. 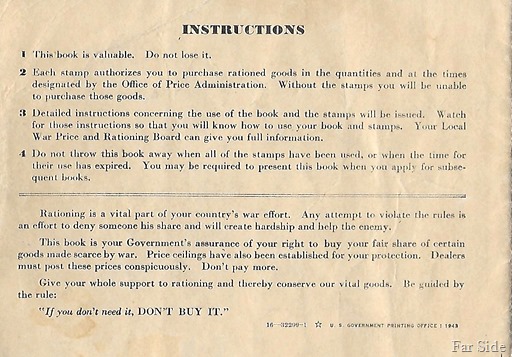 These stamps are from Ration Book Three.  These booklets were issued in September of 1943.  There were eight pages of stamps, four for meat and four for clothing.  The clothing stamps never went into effect but they could be used for shoes.  These were point stamps and they were decorated with Guns, Tanks, Aircraft Carriers and Planes.

You were encouraged to have a Victory Garden, do home canning and not to waste even one ounce of food.  There could be no lasting peace in a hungry world.

You could take your waste kitchen fats and grease to a butcher shop and they would pay you 4 cents a pound.  It was recycled into explosives!   If you wanted toothpaste you had to turn in your old metal tube.  The National speed limit during the war years was 35 mph, it saved on gas and tires.  Every piece of scrap metal and scrap rubber was recycled.

Rationing came about because asking people to use less didn’t work.  Hoarding and price gouging were avoided and every person got their fair share.

The fair share was not much 48 points a month would get you two cans of pineapple or four cans of spinach.

Women that were home canners could apply for extra sugar.

I know that farmers fared better than most people, they could have larger gardens, and raise their own meat..and with some luck a goat or a milk cow and of course chickens for eggs.

Sure makes me appreciate what we have. Very interesting post, Connie.

I remember that WWII rationing. I was 16 when the war ended. We were able to get eggs and chicken from my Grandmas's farm and that helped a lot to make us not feel deprived.But she lived about 40 miles away so that took gas!I remember making "butter" by shaking cream up in a jar.My Grandma had at least one cow I believe. I don't remember feeling particularly deprived with rationing. I do remember saving the "fats" to turn in for making armaments.
(I am now 87.)

I remember the rationing even though I was very young. The big thing that I remember was stepping on the empty cans and crushing them so they could go back to the store. Imagine how well a program like that would go over now.

How times have changed in just one person's lifetime. I was born in 1942 so I don't remember the rationing, but my parents sure did. Fascinating information! Thanks for letting me know how it was done, I had no idea. :-)

My husband had a ration book, he was born at the end of the war, I came later.

I found some worn ration books in my mom's papers. Thankfully, my parents were farmers with a huge garden.

Fascinating! I knew about rationing but never heard such a good explanation as yours. They didn't talk about it but then my family were farmers and they never complained about anything. My Mother and her brothers were in the army and the small town I came from was and still is very community minded. They always helped whoever needed it and always supported their own whether they were disabled, mentally ill or even the town drunk. I am a "saver" to this day because of being raised by them. My Mother would use plastic bread bags over my shoes so I could easily slide my feet into my shoes. She washed and saved foil to reuse and string from anything was saved. Envelopes that came in the mail were used for writing lists of any kind. I could go on and on. Some of this re-purposing and not being wasteful is making a resurgence today which is good to see. Thank you for sharing the pictures and your explanation.

I meant slide my shoes into my boots!

Interestin! I knew about the rations, but never saw the coupons. My mother told me about them when I was young. Makes me wonder if she ever told my sibs.

I can remember our car being up on blocks, in the garage, to protect the tires while my father was overseas. I remember my mother trading sugar stamps for tobacco stamps. I guess you had to shop together since you couldn't remove the stamps from the booklets. As a child I enjoyed my 'jobs' of taking the paper off the cans & then stomping on them & putting them in a big box & stripping the foil off of gum wrappers. The attitudes about war were very different than now--my brother even wore a little sailor suit. Thanks for stirring up old memories for may of us. Sandy

I remember ration books but was too young to understand what they meant. I saw old ones around home. They were obviously destroyed. Good that you found some ration books that had been kept.

I have my grandparents' ration books, too, and they also lived on a farm. My grandma was the person who distributed the coupons in Turtle Township and she wrote about it and the shortages during rationing in letters to my dad in the service during the war. They brought their horses back into use to save on their gas rations.

You give a very good explanation of the rationing done during WWII. I was born after the war but had two older brothers that lived in that time period. I have a few old ration books and a few other items my Mother saved from the time period. My Father and all my uncles fought in WWII and I lost one uncle when his plane was shot down. I grew up hearing so much about that time period and I believe in the importance of learning from history so as not to repeat the same mistakes. It seems like many today have no understanding of WWII and just how far reaching it was to the world.

Thanks for your history lesson!

I think we have an old ration book too! I'll have to keep my eyes open as I declutter around here. Can you imagine everyone driving 35? Very interesting!!

I was reading your blog post to my husband who is a middle school math teacher....he asked me to email him a link so that he could talk to his students about it. I bet their minds will be blown!
Very interesting. My Mom never talks about this time period, but she would have been about 10 years old then, and my grandparents were farmers, so perhaps she didn't notice it much.

Although Canada also had ration books I have never actually seen one. My parents never spoke of rations but as you say, farmers had an easier time of it.

That was interesting. I remember my mum mentioning ration books in England, and I've read lots of them in books about that time in Britain.

Our home small town Facebook page had a guy share a coupon book that he claimed was his. He would have been 3 or 4 years old at the time so maybe they gave books out per person even if they were babies. I think all of our families were farmers so they just got by anyway.