The Carnival was the perfect place for college age kids to work.  Ron who was not yet my Brother In Law came out as a High School student and returned summer after summer until he graduated from college.  His home town was a small town in Iowa.

Ron was second man on the wheel with Dale and then Hubert before he went to the Loop or Loop O Plane.  Far Guy says he helped him buck tubs sometimes when he was bored. 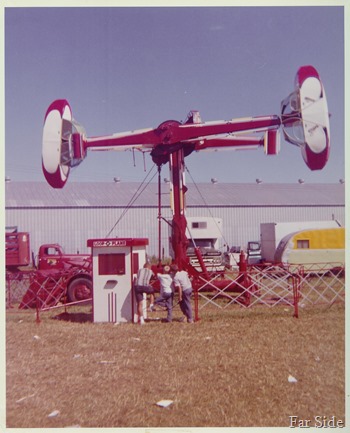 The Loop just went around and around…upside down and right side up.  There was room for eight to ride at one time (four per tub).  Not a great capacity ride but in it’s day it was a popular ride.  It was also a ride where you had to keep a bucket of water handy…because sooner or later some one was going to puke.

“Shakes”  ever heard of them?  That is what is left by the public in a ride…a camera, loose change etc… if the ride shook them loose and they were left behind then the ride boy would usually keep them. Strangest shake he ever got was someones false teeth.

Well during those summer days in the 1960’s he courted Far Guy’s sister and they were married in 1968.  The first time I met Ron was the day before he married Jan.  He made a whole bunch of home made beer…Far Guy had one bottle.  There is something in the homemade fermentation process that Far Guy is allergic to….he got sicker than a dog.  He was supposed to pick up the wedding cake and the green bread in Detroit Lakes and get it to the church.  His Mother called me, he got as far as my home place and I drove the rest of the way and the cake and the green bread was delivered on time. ( Green bread…back then it was quite fashionable to have special bread made, it was sliced lengthways and it was spread with ham salad or turkey salad or what ever combinations of cheese spread and meat you wanted, sliced  and cut into small sections with a tooth pick holding the layers together…. very festive and perfect for an afternoon wedding!)

Ron wrote a poem for his In Laws when they retired in 1977. 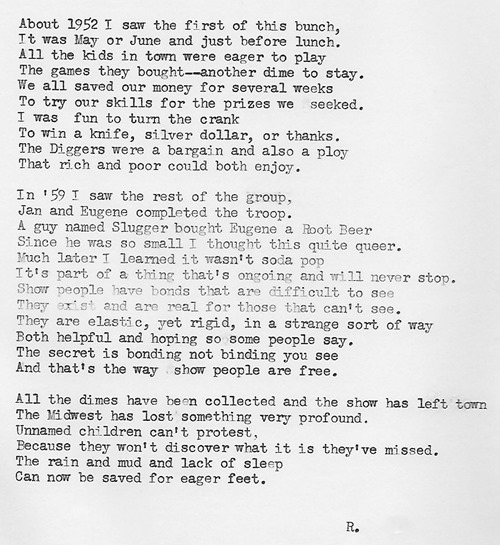 I found this poem in an old photo album the other day.   I wonder if Ron even remembers that he wrote it?

I enjoyed the poem. A very interesting take on carnival life. :-)

So wonderful that you saved all of those momentos and photos and memories. I bet you never guessed that you would have a blog someday and share them with so many!
Thank you!

...this ride was never for me!

Okay now. This is it. This has to become a book. I've enjoyed all these stories. It's a part of life that has to be documented.

Nope not a book just a glimpse for the Grands!

We had a similar ride. I think it was called Salt and Pepper. I rode it once and was sooooo terrified I was going to fall through the openings. Never again!

What a great poem. I will never forget one year at a carnival in Colorado my oldest son getting sick on a ride. I kept asking the guy to stop the ride because I could see what Danny was getting ready to do. But he wouldn't stop the ride. And then he got to clean up puke! Love these memories!!