Ever been for a ride on an Zonkey? 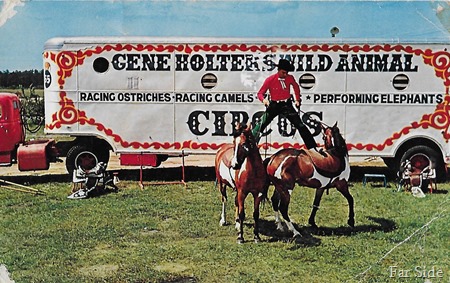 Far Guy met the Holter’s, they had a daughter named Gail and a son named Bobby.  They played fairs throughout the midwest so they would often end up on the same fairgrounds.  The kids were friends.

Gail had a pet kitten, it was a Cheetah.  One time she brought it by the joint when I was working and the kitten jumped from the ground to the top of the diggers and started to lick my face…the tongue of a Cheetah kitten is like 80 grit sandpaper.   Later that day she came over to the trailer when we were closed for supper.  She was sitting on the couch.  Dad told her “We have a wild animal too…locked up in the back bedroom.”  I asked her if he should let it out.  So here is this gal who works with elephants, ostriches, zonkeys and camels…jumping up on the couch when we left our Chihuahua out of the back bedroom.

During the grandstand show they would put a bridle and saddle on the zonkey, they would get a person from the crowd…usually a cowboy…to try to ride it and they would get bucked off.  Then they would call for a volunteer kid from the crowd and the announcer would tell the kid what to whisper in the zonkeys ear.  The kid would get on the zonkey and the zonkey would just stand there and do nothing.  The kid that always came out of the crowd??  That was Gail.  So anyways Gail was telling me that the Zonkey might let me ride him…no saddle …no bridle…I got on and bounced twice the last time I fell off the back end and took a hoof right to the chest.  I was lucky that the damn thing didn’t kill me.  Gail just laughed.”

I rode the elephant one time, the skin on an elephant is really loose and hairy…it has the toughest hair.

They used to have ostrich races, they took people out of the grandstand and gave them jockey suits…they were supposed to steer the ostriches…a broom was used to turn them…blinding them on one side would make them turn the opposite direction.   The doggone ostriches would turn this way and that, people were falling off left and right…it was a fun show to watch.  It was Bobby’s job to round up the ostriches.

Gene Holter was originally from North Dakota.  The last Far Guy knew Gail had an animal sanctuary in California and Bobby was in auto parts.

The reverse of the postcard.

The blind cowboy, he was genuinely blind, his wife helped him get around.  The horses would gallop past the grandstand turn around and gallop back all the while the blind cowboy stood on their backs.  Far Guy said he never met the guy but watched his show many times.

We have been carting around this over sized postcard for years…and here it sparked a couple of great recollections!

Interesting post! Never heard of a zonkey, but made a good guess, then looked it up. A blind cowboy doing Roman riding would have been interesting to see.

Typical show biz. you have to create something that people will just have to see.

Love these memories. I think growing up with the carnival would have been a pretty neat childhood filled with memories. I saw Johnny Cash once myself!

What an unusual and exciting childhood Far Guy had! Not many kids have memories like these.

Gol durn it. I missed seeing Mr. Autery (that's what Pat Butram called him) though we only live ten miles from Preston...:)

Your stories and the people you knew and met were amazing! Fascinating individuals! I can't thank you enough for sharing them with us.

Interesting post ! I am still intrigued by the lady's fear of a Chihuahua.

I laughed at the terrorist chihuahua story. And what is a zonkey? I figure it's a striped donkey. These stories are so different from anything I've ever experienced. I enjoy them very much. :-)

yes a Zebra and a Donkey cross:)