Our woodchucks hibernate from October to April here in Northern Minnesota. They don’t come out on Feb 2 to the below zero weather, they are fast asleep down in the burrows below the frost line.   IF we had only six more weeks of winter I would be elated…but for us up here in the land of the FROZEN  …winter will be over in about 12 more weeks…give or take a few weeks.

I cleaned out my shampoo/conditioner drawer.  Took all the ones that didn’t pass the fragrance test to Savannah.  There are only a few shampoos that have no or very little fragrance.  Some may smell just fine in the store …yes I lift the caps and get a whiff…but when you use them the fragrance multiplys.

I started making my own bathroom cleaner after normal products were chasing Far Guy out of the house.  He cannot tolerate fragrance of any kind….it makes his lungs feel burned and makes it difficult for him to breathe.

In a spray bottle combine the following:

Shake and use.  It takes care of lime and hard water deposits.  It does a good job cleaning and does not have a heavy fragrance….duh it smells like lemon juice and vinegar!

We had an adventure in cooking this week.  Far Guy was hungry for Gumbo, so we made Chicken and Shrimp Gumbo.  I found a recipe and browned the flour in my cast iron dutch oven.  After stiring and stiring over low heat the flour finally got golden brown.  I set that aside and then added some olive oil to my pan and threw in chopped green and yellow peppers with a little onion, added some garlic salt, creole seasoning, thyme, chicken broth, spicy hot V8 juice and two cans of diced tomatoes. Then we added the golden flour slowly!  Finally I added some cooked diced chicken and raw shrimp…and let it simmer.  We ate it over white rice.  Far Guy declared it delicious.  I will have it again next year.  It was frozen in individual servings so he can have it when ever he wants.

Years ago Far Guy cooked some Gumbo.  The one with six garlic BULBS and a whole bunch of seafood that even our dog wouldn’t eat. You could smell that gumbo cooking outside of the house and inside the house our eyes watered. It is a cooking adventure we will never forget…although he may want to!  The best Gumbo ever was at D and B Gumbo in Gulfport Mississippi….mouth watering good gumbo.

I got the February Flag up. 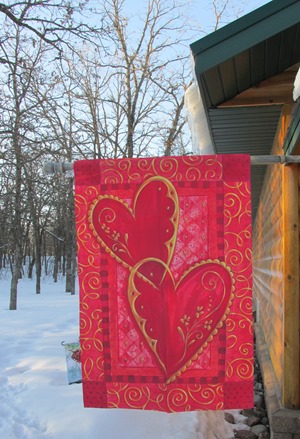 I use a similar bathroom cleaner. I used to put the Dawn in but now I don't even add that. Fill a quart jar with vinegar, add all the orange peels you can, and let sit about 3 weeks. Add 1-2'cups to spray bottle,top up with water, and off you go. Your gumbo sounds great!

Your Gumbo recipe sounds really good. Also, I like your home made cleaner idea. Will have to give it a try. Groundhog saw his shadow here so 6 more weeks of Winter. Blah!!!!! Have a great weekend.

Thanks for the bathroom cleaner recipe. The smell of Dawn upsets my stomach. I may try Cynthia's recipe instead. Seeing all the chemical solutions to our cleaning issues on grocery shelves is upsetting.

Shows how little I know about gumbo, even though I've made it myself - didn't know about that whole browning the flour thing.
Your flag is very cheery against the snow.

pretty little flag! Yeah, I love the taste of garlic, but I have to eat it sparingly; it's rough on my belly.

Nothing like a good gumbo to stick to your ribs on a cold winter day. Do I dare say it will be 70º here today?

I was going to ask you if you'd drive down to "the cities" and get my February flag up for me, but whew! I did it before I fell. I like your version of bathroom cleaner!

Thanks for the recipe!

Groundhogs are good for publicity and fun but we're like you . We will get at least 8 more weeks of winter.

I laughed at the garlic gumbo fiasco. I've been there. Hobby loves garlic and uses bulbs, too. :-)

Thanks for the bathroom cleaner recipe. I have one I make for the kitchen. That uses rubbing alcohol, water, and a squirt of any dish soap. Works great and costs little esp. since I buy my rubbing alcohol at the dollar store.

I don't think I've ever had gumbo! My cleaners are baking soda, vinegar or dish soap. Your February flag is very pretty!

I can stand fragrance but not spicy food! LOL! Thanks for the cleaning recipe. I use straight vinegar with a little Dawn (the stronger cleaning vinegar that Heinz has out now)....things come clean and my sinuses too! Love your flag!