My husband doesn’t like to hear how cold it is, he says that is all they talk about on TV. 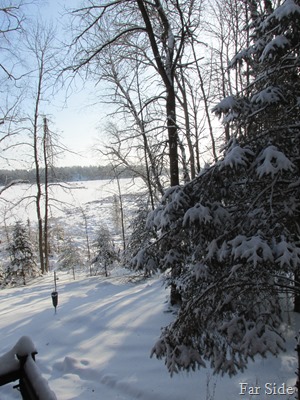 It has been a week.  My sister law Beth and my brother Carey have been in St Louis.  Beth’s father died on New Years Day he was 89 years old.  The funeral was Tuesday.

A old friend died in Kansas on December 31st he was 67 years old and died from a malignant peripheral nerve sheath tumor.  A very scary cancer.  His parents brought him to Bass Bay on Straight Lake fishing when he was growing up and he continued that tradition with his children…and his children and our children were good friends.

What can you do but send flowers and words of encouragement.

My other baby brother, Jody who lives next door was sick with what he thought was the flu.  It turned out to be a complication from the Gallbladder Surgery he had last summer.  He has four stones in his duct.  They tried to remove them but were unsuccessful.  They put in a stent because they noticed a narrowing of one of the ducts.  Now he has pancretitis. He will be in the hospital for a few more days…he is in a lot of pain.  I talked to him on the phone ( he didn’t make much sense, he doesn’t do anesthesia or pain meds well), he is in a far away hospital.  I am sure he will be okay…it all just takes time. 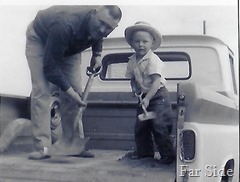 Dad and Jody about 1963
Our grandson Noah had all four of his wisdom teeth removed yesterday.  We were able to Facetime with him and encouraged ice packs and overlapping meds for pain.  Poor kid, but at least he is rid of them all at once.  I felt so sorry for him that I didn’t even ask if he saved the teeth for the tooth fairy.

Far Guy has been enduring a Trigeminal Neuralgia “flare” all week, sometimes the lightening bolt pain is continuous.   He has been miserable and discouraged.  He tries real hard not to be cranky.  It has been a long time since he had a flare that lasted all week….usually a day or two and the pain burns itself out. Not so much this time.

I am fine, I try not to be cranky too!

Keeping all of you in my prayers. Hope Far Guy's flare up is abating. Sounds like a horrible condition.

That does sound like a scary cancer, and so young, too. I hope FG gets through this flareup soon. That is a terrible disease. And so cold up there! I thought it was cold here, but nothing like yours. :-(

Hope that next week is better for Far Guy and you all! Does sound like the past week was miserable! Hoping for warmer weather but it is January in Minnesota!

Winter can be so cruel, we're at our weakest and it knows it. Hope things get better.

So sorry to read about all the sad news in this post. Praying that the Lord will bless Far Guy with relief from his pain, grant healing to Jody, that Noah recovery from his wisdom teeth being pulled, & that He blesses Beth & Carey at this time of sorrow. Blessings on your day.

You guys are not having a good week. So sad to hear bout Far Guy's pain and your baby bro's. Death is a given for all of us eventually and there is pain in loss for those left behind. I hate for anyone to suffer in any way....animal or human. I hope you all get well and pain free fast! It is 5 here this morning so I figured you must really be cold up there! Stay warm!

Sure hope things get a bit better for you soon! It's hard to stay optimistic when you have such an onslaught of challenging events. Let's hope the weather gets warmer at least!

Sometimes when it rains, it pours. The sun does eventually come out! thinking of you and your family.

That is an adorable picture of your little brother with your dad! So sorry to hear about his painful condition. Pancreatitis is horrible from the descriptions we have heard - - - - as also is your husband's condition. I don't know how he has made it a week with continual pain. That wears you down and it is almost impossible to get your focus anywhere else since the pain is about all-consuming.
That cancer you mentioned - - first I may have heard of it. It doesn't sound like a usual one - - - and so almost minute and specific - - - and caused death. Very, very scary and sad!

So sorry about the lost ones, why does it all come on
at the sometime??? The Bennie had Pancreatitis from meds
they had him on for Crohn's disease, he said the pain was
so bad. If he was laying out on a battle field with his leg blown
off it wouldn't hurt as bad.

Sending Prayers to all for Healing. I got sick Christmas Eve morning with the achy, fever cold symptons and haven't been out of the house for two weeks. My husband had it three weeks before me? I don't think the germ lasts that long does it? Now he is getting the same stuff again. They say it's bad in the D.C. area and three people have died from this strain. My whole family got it because they still came for Christmas. Not a good start to Winter. Sharon

The cold is just miserable I've been fighting arthritis issues these last several days...I blame it all on the cold.

Hi Far Guy - I feel for you because I know the excruciating pain of TN having had those
pains myself. Had operation that took away the terrible pain but left numbness.itching,eye watering etc.Surgery was Balloon Compression. I hope that you get some relief from your prescribed meds.

Oh you have had a lot going on lately. Hope Far Guy feels better soon. I can't even imagine -32. It seems miserably cold here in the 20's and dropping.

That is a big load of troubles to start your new year. Condolences on the loss of your old friend. Hoping Far Guy get relief from his awful pain very soon.

All I can say is That Sucks!
Hang in there. *hugs*

Starting at minus 35 C eh it goes down hill all week. It's not to be crabby under thee conditions. I can't remember the last time we got minus 35.

What a string of bad news. Sorry to hear about all the pain and sickness and very cold weather. Maybe a good movie tonight will cheer you both up?

I'm so sorry to hear about the sicknesses and deaths. I sure hope Far Guy gets to feeling better soon. It must be difficult for him to live with that health condition. I'm sure the extreme cold does not help at all either! Please take extra good care of yourself as well under all these conditions!

That is a lot of bad news! Must make you just want to go into hibernation. I sure hope FG feels better soon.

Yeah, 2017 hasn't started so great for me, either. I have a stomach bug AND a cold, and my ex MIL is dying. Hope all improves for you guys soon, and sorry for your losses.

I'm sure Noah will be up for your tooth fairy line in no time ;)

As for the rest of your family, you are right: sometimes all you can do is be an encouragement and hope for the best. I was thinking Far Guy's condition seemed to not have as many rugged ups and downs lately, but this one doesn't sound good. Hopefully, it can get stabilized soon. It does sound miserable!

That is wicked cold, has not been below zero yet this year for us in Anchorage Alaska. Six degrees F today.

Hope Far Guy is feeling better. Sucks when it is cold and miserable outside and then be in pain while stuck inside. :(

Oh my! I hope all of this is behind you now!