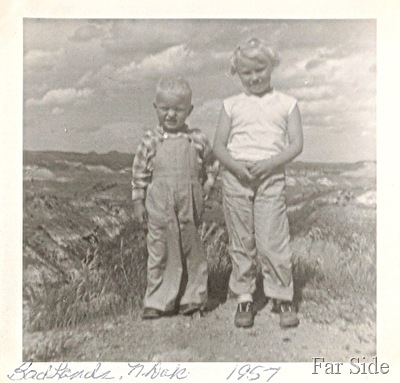 You also didn't mention that the bread was probably white Wonder Bread that I mashed into little lumps just to see how small it would go!

We went with my grandparents to work on the "farm" every summer and i remember the tomato sandwiches with homemade mayo.....!!
Enjoy

Oh my, I had forgotten all about sugar sandwiches. I loved them, too, especially on homemade bread. Thanks for jogging my memory.

That is a cute photo. It reminds me of when we visited the badlands area of Alberta. David would have been about mid teens, and we sent him down into the bottom to pose on some rocks for a photo. When he got back he said there had been a rattlesnake curled up about 10' away from him.

Thanks for your comments on my mum. The only other relative is my sister in Ontario, 3000 miles away. She is the one raising the guide dog puppy.

Just so cute, love them old photos, I have so many, need to up load some. Hugs

I remember sugar sandwiches. :)
I dislike snakes. And unfortunately most bugs. I am such a city sissy, haha.
I need to get over that one of these days. ;-)
Hope you're all doing well, Far Side. :)

My family did the macaroni and canned tomatoes too. I'd forgotten about that. We also had fried bologna. My mother would get 5 patties out of one lb. of hamburger too.

I've been to the Badlands too, but didn't know there were rattlesnakes nearby. I'll just not think about that.

I remember eating sugar sandwiches too.

Sugar sandwiches are so good. I also love the fried bologna, we had that a lot.

It is such a wonderful photo of you and your brother. Times were tough and I remember my dad had to go borrow money at the bank yearly just to buy food for us and the livestock knowing eventually he could sell a load of hogs to pay it back.

That is a great photo, I love the blondeness.

People always made us face the sun so we all had squints. That is a great picture of you two. We ate sugar sandwiches at times, too. But I don't want any more grape jelly sandwiches!!! And only bologna on a rare occasion.