When I was just a little girl, my Maternal Grandmother used to say “Better watch out or you will have to go to the Poor Farm.”

Poor Farms were very common in the late 1800’s.  There was no Social Security or 401K’s for retirement or health insurance.  Everyone did the best they could and took care of their family and extended family if needed.

I had not thought about “Poor Farms “ in years.  Then I noticed an old photograph in the museum. 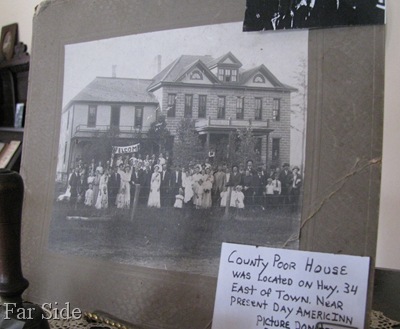 Poorhouses were usually large and located on a farm.  Everyone was expected to work on the farm while they were there.  You might go there because of an illness, or the death of the wage earner in the family. You might be there a short time, just to get back on your feet again. If you were elderly, you might live out the rest of your days there. As far as I know, no one was turned away. We have a whole file full of Poor Farm information.  If you are searching for a relative and cannot find him or her and they seem to have disappeared you may want to check the County Poor Farm records.

Minnesota was a struggling territory in 1849, and had adopted all of the laws of Wisconsin, their neighbor to the east.  When Minnesota became a State on May 11, 1858 they started to make their own laws.  In Minnesota in 1864 a Poor Law went into effect which required County Commissioners to  maintain poorhouses or make other provisions for the poor. Previous to 1864 townships were supposed to take care of their own poor, but that system did not work so well. Hence the Poor Law.    Poorhouses existed in some areas of Minnesota until the 1950’s totally financed by the County in which they were located.

Another thought..when we used to play the card game “31”..you were allowed one free turn on “the county.”

Now both you and I know more about poorhouses than we ever thought we would know.  Tell me if you have ever heard of the term “Poorhouse or Poor Farm” before.

Work is going just fine,  I learn something new everyday:)

I've heard of both but never really thought about the meaning.
On this subject, I have decided I am a local Liberal. I would be happy to help out anyone, for a time, if they needed it. In this very rural area, we don't have anyone on welfare or "homeless". We don't allow it. If someone is struggling, we all pitch in and help them. But if someone tried to "game" the system, we would no longer help them. It's probably a lot easier to drive by someone who looks to be poor or homeless if they are just a nameless stranger. we take care of our own, around here.

I haven't heard the term in years but remember it well.

When I was a small fry my Pappy Walden purchased another farm in a crook in the road town called Filly Mo. Granny Walden pitched a fit and a half sayin' that the investment would put 'em in the "Poor Farm". That spring Pappy, Dad and my Uncles planted the whole farm in wheat. That farm paid for itself in the first harvest. From that day forth it was always known as the "Poor Farm!" Heeehehehe!!!

Yep, back in the day there was no such thing as bankruptcy. You were just sent to the Poor Farm.

I so enjoyed the story and the picture.

God bless and have yourself one fantastic weekend sweetie!!!

I only heard of the "poor house" in generic terms and never gave it a thought. I didn't even know it was a real thing. Our family was military and everyone I knew growing up had stable homes, even if we moved around a lot.

I remember my Grandma saying "that kid is going to eat us into the poorhouse" but never thought much about it until now.

Like others, I've heard of the poor farm, but didn't really think about it's purpose...It was probably a good idea as it gave people a place to stay if they needed it...

I've heard of poor houses and it seems an enlighted thing to do - back in the day they threw debtors in prison. A poor farm sounds almost idyllic...

I remember my grandmother on my father's side, mention the poor house. As a child it didn't mean anything to me. I knew of them in relationship to Ireland and the potato famine, but never thought abouta poor house being here too.

Thanks for the history lesson. I love them.

We passed a poorhouse along highway 34 going toward Afton, Iowa when I was a kid. Later in life I learned that the walls of the very nice looking colonial mansion, didn't have plaster walls but was sheeted with horizontal boards for walls in the individual rooms. It showed them being dark and depressing.

I have heard of the poor house and the poor farm, as well. I don't think we were ever threatened with it but I knew of it - but then, the use of them were gone before I was old enough to be really aware of them.

Usually it was, "something, something, something... end up in the poor house," from my mother. Direr warnings for living rightly, which for her meant not being a farmer, earning gobs of money, and not letting it out of your hands. There were no Poor Houses in our area, no evidence left of them by the time I was cognizant of things. There was an orphanage that we kids visited up on a hill that no longer exists, the orphanage and the hill are both gone now. But armed with my mother's constant warnings, Dicken's novels that included debtor's prisons and the orphanage, I had a fairly good image to target with my angst of being a pauper and or an orphan. Funny then my life choices.

I too, have heard both terms without knowing what these really meant.
Thank you for the heads up!

Last year we were looking for a Bed and Breakfast near the shore in North Carolina. Well, they are mostly in old mansions, and the price was as high as the ceilings, so they were out of the question. But there is an old Poor House in Beaufort that was fixed up as a Bed and Breakfast. It was lovely. Each suite consisted of a small bedroom and a small kitchenette. But each of these small rooms would have been a space for a person/small family in the old days, with outdoor "facilities."

Yes, my parents used that term too! Maybe that's why mom was not happy at first about my marrying a farmer!

I've certainly heard the term 'Poor House', although not Poor Farm. Never thought about it much, but I think I could have sort of explained what it was if asked.

There were lots of poor houses in the UK too. Fascinating stuff.

Up in Bradford County, Pennsylvania we had a poor house that doubled as a rehab center.

Yes, I remember "Poor Farms" I attended a little rural parochial grade school, there were 11 of us in my class, split grades every year. We all knew each other and the families in the community very well. One year there were these new kids in school, Sylvia, Barbara and some younger boys. Barbara was a special needs student, going to a school that couldn't accomodate her. They walked about 1 1/2 miles to school from the Poor Farm. Rumor had it that the dad went broke trying to get help for Barbara. Through the years, I have often wondered what happened to those kids. I pray that they all ended up having good lives. The family stayed to themselves, no one was invited over to their house to play, and now I am wondering why we didn't invite those poor children to our homes.

The house I have in Edgewater, MD is on Almshouse Creek. Alms for the poor! There is an old, now considered historical, house at the end of the main road down the penninsula and it was used as a poor house (alms house). Look up Londontown Publick House...

I'm always scraping by, so I considered living on Almshouse Creek quite appropriate. grin

Yes, I, too, am familiar with "poor house". While doing genalogical research, I found a gr. grandfather in a poor house due to ill health.

I often wonder which is better a poor house or our homeless people. Interesting. Harriet

That was interesting, I agree with Linda, I always heard the saying about the poorhouse but never really put much thought into it.

I had heard about the poorhouse, too but also never knew it really existed. Isn't it great that some people never throw things out so we can learn about history?!!

I have often been told about ending up in the poor house, if we did not work hard and grow our own food.

Debtor's prisons always surprised me...how can they pay their debts if they are in prison?

Ha, poor house was where I lived growing up. We moved from place to place with meager belongings and rented run down places.

I remember hearing that phrase, too. Thanks for the history lesson. Times were hard! But, thank God they tried some way to take care of people. I can see some good coming from that poor farm, but I'm sure there were many problems, too.

My mother used both terms, but mostly poorhouse. As in, that's where we'll end up if we (insert lazy or wasteful behavior here).

We had Poor Houses in Scotland - mainly in the cities. The conditions were pretty poor, as was the food, and the work was hard (many were employed to break stones) but at least it was a roof over your head I guess. Poor Farms sound a little healthier! Jo

I've heard the term poorhouse, but it has been many many years since I did. Now I know more about it. :)

My folks talked about it. Seems a better solution than now. There is honor to work your way out of debt and despair. That value has been lost