Thursday afternoon the grands arrived, all five of them at the same time!   Chance was so excited!

We have a new tween, someone turned twelve.  Someone who used to be a little boy and whose voice I could recognize in a crowd, whose laugh I could hear from a long ways off..has changed.  There was this new deep voice, and a different laugh..and my grandma ears were confused.  Who is this new person and what have they done to my grandson?

I didn’t notice it when I talked to him on the phone..when we discussed his cake.. “How about an ice cream cake when you come over on Thursday Noah?”  He replied in his little boy voice, “Sure Grandma that would be fine, but I don’t like the frosting.”  I said “Neither do I, we will scrape that part off and just eat the ice cream” He said “good deal” ..there was no hint of a deep voice..I was clueless. He looks the same, well he might be a bit taller and a tad skinnier than the last time I saw him.  The little boy is gradually disappearing. 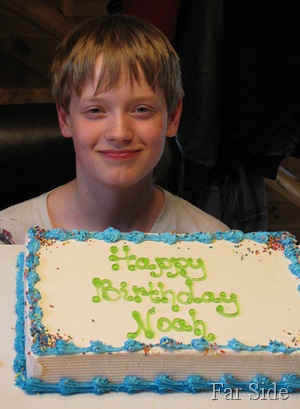 A young man, with a deep voice has taken his place.  I will just have to face the fact that he is growing up:)

I know!!! Sometimes, I have to look to see who's talking!

I hear ya on all that. My boys are now 22 and 15 they grow soo fast ! Happy Birthday young man ! Have a great weekend !

It happens so fast... he's a fine looking young man to be, Connie! Have a great weekend with your grands.

I used to teach at the Middle School. It was so interesting to watch boys become young men and girls become young ladies. Everything changes! Despite the deepening voice, Noah looks like a sweetie pie!

Handsome young man there. Hang on grandma, hug him all you can. He'll grow like the Incredible Hulk from now on. You'll find yourself exclaiming "my how you've grown" every time you see him in spite of yourself.

Just scrape off the frosting, good idea, and get to the good stuff. Boys go through changes too. Hope Noah had a great birthday and you got plenty of pictures.

Happy Birthday, Noah! (I bet the deep voice surprises him once in a while, too.)

They grow up so very fast, it's hard to see it. But to them it's slow.

Such a touching blogpost Connie..I have two grandsons, Nathan is 9 and he doesn't live close so I see big changes in him everytime we visit..and now I have my 13 mo.old grandson living right across the street from us..he is changing everyday in front of my eyes. It is so fleeting (this growing up thing!) and as they do, I enjoy every phase.

He is a handsome young man. Praise God he still loves and wants to be with his grandmother. May you both always enjoy a wonderful relationship.

When I returned to teaching after 2 and a half years it was so much more noticeable how the guys had grown up to be young men. The voices weren't the same and all the short ones actually were tall. They were so pleased that they I noticed that they were tall now. The girls matured faster so they were the same but were so much more serious. When our little Aaron called and says hello mom or hello dad we still are amazed of the voice of our little skinny guy of past.

They grow up so fast don't they? Hope he had a great birthday!

I love your header!!