Sometime very near the first of May in Minnesota sucker spearing opens. Suckers are small fish weighing 2 to 5 pounds.  The suckers leave the lakes and swim into the shallower small streams..why?  To spawn, to run the gauntlet of men in hip waders with spears.  If they survive they win a prize (two lucky males will fertilize one females 100,000 eggs) ..if not they are speared and thrown on shore, bleeding and flopping to be picked up by one of the lowly sucker spearing assistants without a spear..he will pick them up and put them in a gunny sack.  (For you city folks, a gunny sack is a loosely woven brown sack that held oats or corn or some kind of feed. If you were ever in a gunny sack race in the summer and you had shorts on, gunny sacks would make your legs all itchy.) The suckers are gutted out and sliced in half and then they are taken out back to some old refrigerator that has been turned into a smoker..after a prescribed amount of time in the smoker they are taken out and eaten.

Oh my there is nothing better than smoked suckers.  What a treat this used to be, the fish would be placed on a plate and everyone would dig in..it was a wonderful snack.  The flesh of the fish was pink on the outside and white and succulent on the inside and salty..you picked out the plentiful bones as you went…and piled them on the edge of the plate.  Just in case someone got a bone stuck in their throat there was usually bread with butter to help push the bone on through followed by a glass of water. 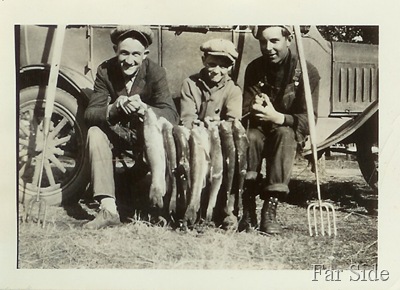 This is a very old photo, Far Guys Dad, Marvin is on the left.. we are not exactly sure who the other two boys are. ( I will guess that they are Jim and Ronald..but I may be wrong..I am sure the relatives will send me an email if I am in error.)   It was a successful trip, the two oldest must have speared and the youngest got to string them on a stringer.  I am just guessing that this photo would have been taken right around 1934. The smiles on their faces tell the whole story.  If there was one thing that these boys liked it was sucker spearing:)

The suckers in all walks of life are small fish too.
The bone stuck in the throat doesn't sound so good but the taste of fish sounds great.

What a fun photo. Those were the days!

Awesome post and photo brings back memories of my dad and I .My dad and I would trout fish.
Gunner sack ? never heard them called that cool we just called them burlap sacks cause thats what they were made out of burlap lol at least the ones our grain for the cattle were. Have a great day .

Sounds gourmet too me. Never had smoked suckers but carp, whitefish and ciscoes from along the "North Shore" were considered top shelf. And I used to bowhunt carp along the Mississippi in my mispent youth. I think that was before they invented PCB's though... :)

Eww! Just the name "sucker" makes me not want to eat the fish, and then you mention the bones... The picture looks like I am alone in my estimation, those fish would make many a meal.

Reminds me of going fishing with my father. Even the day that my little brother let all the fish go that daddy had on the stringer. "I was just looking at them." He said.

I can't get past the name "smoked suckers" to imagine eating them.

What a great story. I didn't realize you could do anything with suckers other than fertilize your garden.
Happy Wednesday! :)

Smoked suckers? Sounds like a good name for a rock band... ;-)

What a wonderful picture of a great bunch of suckers...I'm talkin' about the fish, don't ya know? Heeehehehe!!! Just look at the smiles on those happy fella's faces. :o)

There is a Little Town here in southern Missouri who celebrate 'Sucker Days'. They catch 'em on a fishin' line and fry 'em. I'd rather have mine smoked!

Have a great day sweetie!

I love the history of your post. I have heard of suckers, but never tried them. I'm not an adventurous fish eater.

I grew up around smelt fishing. Smelt are about as long a woman's hand, maybe, but very skinny. You clean them by cutting off the head, slicing the gut and running your thumb down their middle. I couldn't get past the whole idea of that. Plus, it was mostly "smelt drinking".

Down here, in NC, I saw a sign for a Mullett Festival. Being a northerner, a fish was not the first thing I thought it was for.

Loved all of the comments and the photo.

I love fresh fish. But suckers that live in the mud and eat moss is pushing it. Maybe with a lot of smoke and spices.......maybe not. Love the story and the history you've preserved.

I'm reading multiple posts this week about fishing. As a non-fisherperson, seems like fishing should be a summertime activity. Guess not!

I'm not crazy about fish but the smoked fish I have eaten in the past has been very, very good.

My Dad was absolutely nuts about suckers. He would get enough to can them. I hated them because they were all bones. it's good to hear that other people like suckers and that my Dad wasn't just crazy. Dad died in 2008 at age 95 so you can get his vintage.

love the photo. Glad to hear its not a lost art