Far Guy has  only a few hobbies. He makes “stuff” for me..like custom built furniture and cabinets and he enjoys woodcarving..and knife making, at least before he tried to cut his finger off.  He now has a special glove and he can grasp with his fingers for a short time..not long…he carved a bit yesterday at our carving get together.

Saturday we went to St Cloud to The Granite City Train Show.  Talk about a packed place.  Far Guy knew what he wanted..I picked out a few things for him..some old Marx light towers..and some plastic brown telephone poles. I am all about the accessories.  He walked by one table and said “I used to have this car as a kid. I think we blew it up with firecrackers and it accidently started on fire so it had a hole melted in it.”  For ten bucks he is back in business with that car again.

The building was wall to wall people and it was hard to walk..I was scanning the building for emergency exits..so I went outside and sat down for awhile. I had fun talking to the “train guys” outside having their lunch at a picnic table.  They oohed and ahhed when they found out that my husband has his trains upstairs..they were both basement dwellers. 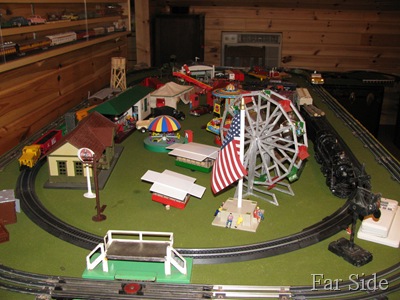 When I returned inside I finished looking at the tables that I missed. I noticed Far Guy way over in the next aisle…checking out his billfold..counting.  I knew he had two things that he wanted, a Scrambler..and I knew he didn’t have that much money on him.  The other thing I had no hope that he would ever find..but he did. 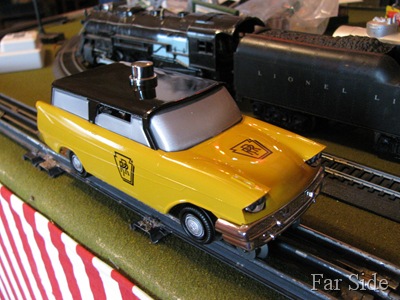 It is a Lionel 1958 Desoto Rail Inspection Car..yes siree he wiped out his entire stash, and was grinning from ear to ear.  It was a great find.  He set his train off the track to run this baby around solo..it is a beauty. 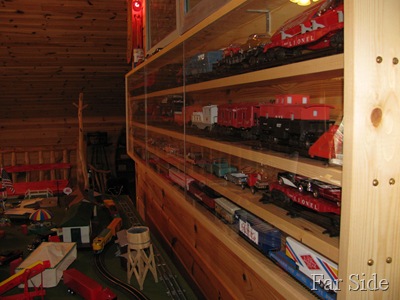 He started out with one small shelf along this wall a few years back. Last year he designed and built this cabinet to house the extra cars that were not running on the track…it is now full. 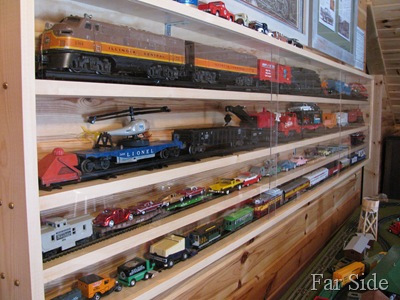 He has been busy fixing and repairing all winter, the helicopter car is fully operational now.  The car carrier is filled with little cars, the hospital car is white again, and the missile car is loaded with missiles, the crane car works, and all the flat cars are loaded.

He “thinks” he may have enough train “stuff” for awhile. He did say that he has some doubles..and maybe he should get a table at next years train show and sell some of his duplicates. I think he should just build another cabinet to go on another wall.  His hobby certainly has developed..into a hobby gone wild:)

Oh! How I would love to see this collection!!!

Awesome collections.
Far guy needs a wood shop like my Papa now has. Papa loved to make anything and everything from wood, he also loves trains. Great post, have a wonderful day !

I love Far Guy's collection. And I love that you help him with it. :)
I wanted a train when I was growing up. One of my brother's had one.
Never did get one and now I suspect I'd go broke having one.
But I love seeing them.
Glad to hear Far Side has been able to carve a little, too. That's great news! Happy Tuesday to you all! :)

The hubby and his dad loves trains and far guy sure has a collection!

I totally understand about the collecting thing. My husband collects guitars and according to him, "a guy can never have too many guitars". So good luck, Connie, Far Guy will never have enough and getting him to part with any of them may be a pipe-dream. But then I should talk as I can never have enough books, yarn, kitchen gadgets, flowers, etc. Guess there is a little "collector" in all of us. Far Guy 's train room is fantastic. I would love to see it sometime. That is one collection I wish my husband had taken up instead of guitars - then I could at least play with them. I don't know how to play guitar. :)

It looks like Far Guy has a great collection, and a nice place to enjoy it. What a fun hobby!

That's an amazing collection, Connie. And I do know that when a collector gets a new addition, it's a great day! I am not a collector but know quite a few. You are lucky it's trains and you have enough room to accommodate them.

What a great thing to collect and even better when your wife understands! LOL I'd love to see some of the other cars you mentioned as well - a helicopter car? Very fun and a great distraction while his hand heals.

Great collection and it's better than drinking and chasing women:)

What a fabulous set-up! Love the shelves... and they are behind glass, how cool is that?! I am fascinated by trains and love looking at elaborate set-ups.

It looks like a wonderful collection. The joy of finding something from the past is so exciting and I am glad his stash was large enough. I have a friend who is an erector set fanatic who just keeps buying one more thing. He has stuff old and new that I have never seen before. Yes I remember all the toys that met their doom in our household and others that went to the dump while I was at school. Great looking rail car.

The train cases are a thing of beauty, no doubt, but I loved the "blew it up" story. That is such a boy thing. He probably had a smile as bright as Christmas morning getting that inspection car.

My husband's hobby is making beer. His buckets and pails and burners are not picture worthy. If I drank beer, I would be more excited about it. lol

Boys with their toys! Love his collection - amazing.

What a glorious train collection he has. I had a smoke puffin' whistle blowin' cast iron train set when I was just a little chicklett. (I was the only boy Daddy was gonna have) When I got a little older I gave the set to a boy step~cousin and have kicked myself ever since.

I too think that Far Guy should just build more display cases ... or set up more tables! What a treasure he has there.

God bless ya and have a wonderful day sweetie! :o)

He is so talented with his cabinet building and I am thrilled he is able to begin carving again. It's exciting he has a passion for a fun hobby like his trains. When we lived in the western part of TN, there was a man who decorated his train track for Christmas and invited parents to bring their children. It got to be a tradition for small groups to visit and then carol.

That is an impressive collection. The Duke would be very jealous :)

PS Snow gone yet? We've had a bit of sunshine!

Wow, that is quite the collection, and nice that he has it so organized. And you know, when you collect something, there's always one more thing that you 'need':) That's a great looking yellow car!

That car is a real treasure. What a great hobby and display. You two might enjoy Shelia's current post on NOTE SONGS blog about the train museum.