This is one of my feathered friends at work. 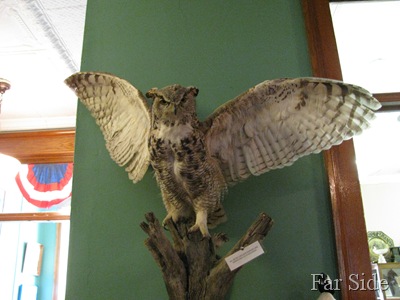 He doesn’t see to be affected by the cold, although he is dead, perhaps that makes the difference.  He is on the wall between the main entry foyer and the Heritage Room.  I think he needs a name..any suggestions?   He doesn’t actually have “horns” but his ear tufts can give him the appearance of horns.  My bird book says he is heavily barred underneath..that must be the almost striped appearance..and that he should have a very conspicuous white throat bib..indeed he does. 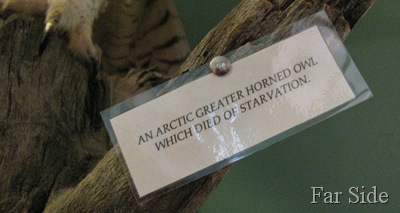 This is why I think he was a little on the stupid side..but perhaps it was a really hard winter with lots of snow and not many little critters running around for meals.  He would have eaten just about anything that moved mice, rats, voles, rabbits, skunks, squirrels, bats, frogs, toads, fish and weasels.  He will also eat song birds, ducks, geese and yes even an occasional kitty cat..for those of you who let your kittahs out of the house.  He hunts usually at dawn and at dusk.  He is normally a food hoarder and will have a stash..but apparently this one forgot to read the Owl handbook.  He is very common in this area..and can in fact be seen in most of North America..from just south of the Arctic Tundra to South America.

I have to speak with Bill on Monday.  Bill is a Taxidermist that carves with us.  He gave Far Guy and I excellent advice on how to care for our deer mount. I will have to pick his brain about the correct care for feathered mounts.

To answer some of your questions.  The small antique electric heater I have is near my desk..not under it because there is hardly room for my feet.  It takes a long time for the room to warm up, and if I am off in some other part of the Museum I turn it off.  They gave me two antique heaters..I am afraid if I plugged them both in..I would be without electricity for a little while.  There is no air conditioning, but they have assured me that they will bring me a fan, as they do not want the windows opened.

I have eight bosses…and they come in and out throughout the day..each one with different instructions, needs and wants. I am a people juggler.

I am familiarizing myself with the entire building..exploring on my own and cleaning out the office.  Yesterday I did inventory in the gift shop, between interruptions and phone calls. Oh yes, the five phones..they all ring at once, it is just one phone with four extensions throughout the building..and two of them do not work.  I think they need new batteries..and I still cannot figure out the answering machine…but neither can any of my bosses:)

Sounds like a great job...surrounded by all that history. Maybe it will be worth the absence of comfort.

I am impressed you still have time to blog for us. And I am glad, too because I like the way you tell a story.
You have confirmed what I thought that an owl will take a cat. We don't have to worry as much about ours now probably since they are 'plump'.
A name - - - owls remind me of farms and barns - - - and this one was less than smart about doing his job - - - so Barney Fife comes to mind - - - but that name seems undignified for such a fine feathered beauty.

You always seem to come up with great names for things yourself. He is a beautiful bird, and we have barred owls in this part of the country, too. I had a hard time with just ONE boss, so I'll be interested in hearing how you make out with five! :-)

Sounds like a nice place to work though being surrounded by all the history, fasinating.
Have a wonderful day Oh and Happy Mothers day !

Sounds like they need to hire a someone to fix things.....wait......that must be one of your jobs. When you find out how to care for bird mounts let me know....I have a short-eared and snowy owl mounts that I've wondered about vacuuming (gasp) the dust off.

Hmm, I was going to suggest naming the Owl after the one in the Winnie the Pooh books, except that HIS name is "Owl" - of course he spells it "Wol".

Or you could upset the Harry Potter fans and call him/her/it Hedwig. :)

No AC, and they don't want you to open the windows? Whaaaa?

I'd go for Hedwig owl. I wonder since he died of starvation, that when he was stuffed, they added a little padding.
I'd say bring in someone under the age of 25, and they could probably figure out the answering machine.
Five bosses, hmmm, I'm guessing you just pay lip service to the bosses and do what you think is best:)

I was first thinkin' somethin' with Professor 'cause of the wise old owl thing but obviously he was a fry or two short of a happy meal.

How 'bout Starvin' Marvin, ya may or may not give a 'hoot' for that one! Heeehehehe!

So many bosses so little time. That has to be a nightmare in itself. Conflicting directions and opinions will fly.

Maybe just call him Hooter? ;-)
What a great job. Hope you continue to enjoy it and they don't drive you crazy! :-)

Have a great weekend, all of you!

"Tufty" - although that sounds too cute for a kitty-eater!

Wait now, I missed something huge. What's going on Connie? You got a new job, and you have an owl for a friend? :) I look forward to hearing more! Meantime, we saw one of these land on a trampoline of a neighbor's behind our house in the fall. It was an amazing and a bit frightening sight. Troy said if our cats had been out, it might have grabbed them for a snack. Yikes!

LOL - it sounds fun at your work - but far too cold!

I suggest we call him: Ollie the Owl. If that doesn't work, then he looks like an Eggbert to me... ;-)

As I was listening to an old rock CD yesterday, I thought, Hey, great name for an owl...The Whooo. Depending on one's musical tastes, I suppose.