Yesterday Savannah had a home game, it was the championship game of a three day tournament.  Bemidji played Roseau.  Now Roseau is way up north on the Canadian border..those girls can really skate. The Bemidji gals did great. 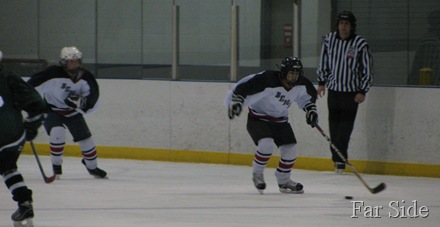 Savannah in charge of the puck..she has a black helmet. She is number 20. 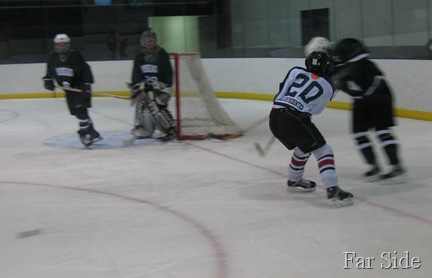 She is an aggressive in your face player..the puck is the streak off to the left in the red circle.

At one point in the game she came on the ice..determined..the way she skated was different.  She had a purpose..that puck was going to be hers..she was going to own it.  Well she got possession of the puck and with what I described as “the precision of a stealth bomber” she skated through and gave it her best shot. 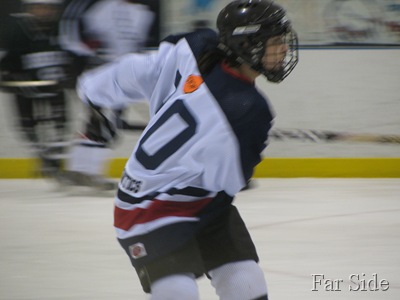 Savannah shoots and scores!!!  And I got this photo!!

The crowd erupts..and someone in the distance hollers “That is my Granddaughter!”  I am jumping up and down and I miss a few celebratory photos..as her team surrounds her. 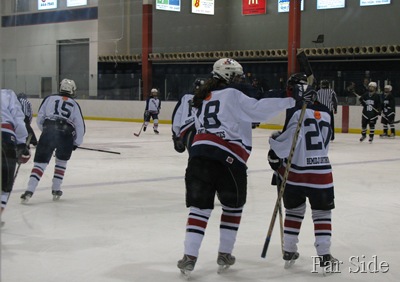 I wanted to get another photo of her and her “point” on the scoreboard. 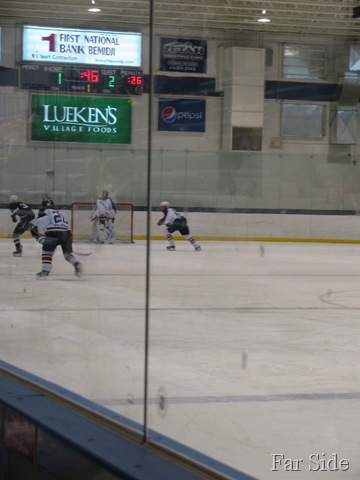 I finally managed an acceptable shot!  I think they should polish the scratches off their glass.. 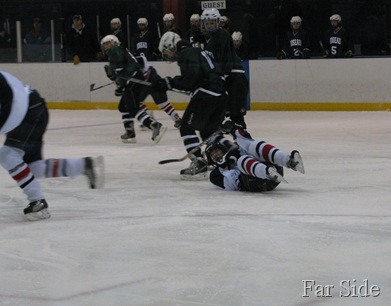 Sometimes Hockey is a rough sport..yes I captured a shot of her off her feet momentarily.  She was barely down and then back up again. 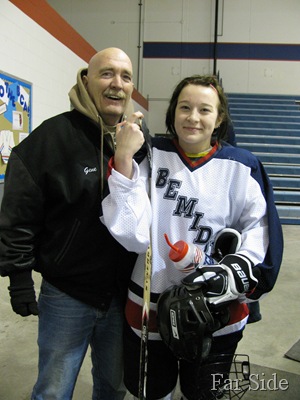 Savannah and Far Guy..the end score was 1-4.  Bemidji lost..but it was a good game…and a fun afternoon:)

Yay for the goal! Yay for a fun afernoon!

Way to go Savannah and good for you Connie getting the photo!

Awesome photos, Good for you Savannah, I played hockey as a yongster, but sadly had to give it up due to damaged knees from the sport ! Have a great day !

Hooray for Savannah for giving them a point so it wasn't zero. She is a beautiful young lady. It's wonderful you are able to attend her games.

I can just imagine all the excitement happening when that goal score horn sounded. I bet you were ready to pop a cork and celebrate. It had to have been a lot of fun. Savannah is a beautiful girl and that is a great photo of her and grandpa Far Guy. Those are some pretty outstanding action shots too!

What a story! I was glad she was so determined. I can see Far Guy is a lot proud and he should be. A lot of guts to play that sport and more determination to get a score. This is a new side of your family I didn't know.

What a great post, grandaughter and gramma. Those Roseauites are awfully tough for such a small town. Heck with that... they've won a lot of State Championships, pure luckily beating my Harding High School team in the State Championship game of 1959. omg that was a long time ago. :)

Ice Hockey sure is a rough sport, but just think, she will be able to hold her own against anyone! Loved the game shots! You did good.

YEAH! Now that is some playing, I must say. And there was Far Side getting the action!! It was just as exciting for me to be there through your words and pictures, I must say. Thank you SO MUCH for sharing this moment with me!! Woohoo!!

It's great that she is so strong and competetive. And beautiful, too! And you got hockey photos... not an easy sport to photograph!

The thrill of the play! Great shots.

Far Side, so she got the one point for her team? How awesome is that? We had a basketball tourney in Hawley for Beth this weekend. They have a new team, two schools combined, so they are just getting to know one another. They have lost every game so far. But this weekend was a victory, because they played the hardest I've ever seen and held down their opponents to low scores, rather than the blow-outs that started their season. It's amazing how proud a mom can be over three losses, but they were so exciting! So I totally get it. And yes, when Beth made her points, I was beaming, thinking, that's my daughter! And why not, right? We've earned it, right?

P.S. Have to thank you every year I celebrate another in the blog world. You are truly the person who held my hand in the first weeks and I will always be thankful for that.

LOVE that last photo. I had no idea girls played hockey. Very cool!!