Years ago you had to get your ice chunks from the lake in the winter.  Jalmer Thompson would cut you  a 16 x16 inch cake that was 18 to 20 inches deep..depending on the depth of the ice on the lake.   He charged 4 cents a cake.

The cakes would be unloaded in your ice house, each tier that would be unloaded was covered in about a foot of sawdust from the local sawmill.  Three tiers of about 30 cakes each would fit in an ice house in this area.  Dick Taylor had the sawmill in Ponsford.  I have no idea what he charged for the sawdust.

In this area the ice came from Dezell’s Lake, which was then called the Chilton Lake…when I was growing up we called it Zauche’s Lake. 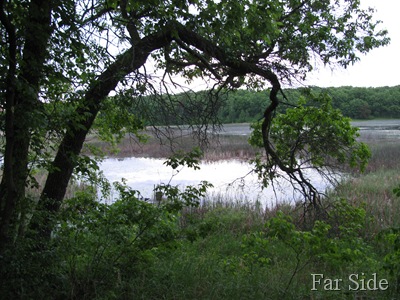 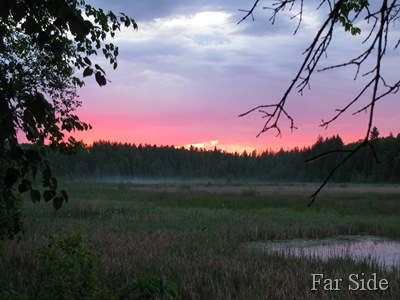 Now it is back to being called Chilton’s Lake or Donnie’s Lake.  We walked down to the lake one day last summer with Donnie.  The lake has sure changed since I was a kid, of course this part was never any good for swimming..we swam in the eastern most part of this lake, where the bottom was sandy instead of mucky.

I had no idea that this was the source for cakes of ice for the early settlers…but I guess it makes sense.  I think that we take much for granted in our modern life..like ice cubes that magically appear in the freezer from an automatic ice maker:)

Our ancestors were definitely industrious. I can't imagine the work involved in cutting the ice, hauling it to shore, loading in on a wagon, and unloading it at the customer's house all in miserably cold weather. I hope we still have individuals with that hard-working ethic. I don't see it much anymore.

Thank goodness for some of the modern conveniences. Well I can live without the magic of the automatic icemaker, but a fridge sure is handy:)

The "ice from the river" stories were some of my favorites to listen to. My dad had stories from Okanogan and mom from North Dakota. Dad's stories were always fun and exciting, my mom's started out being fun but always turned to the treachory of the whole thing. Must be the whole mom and poking your eye out thing.

It is amazing how far we have traveled in just the last hundred years isn't it?

I do remember the old 'Ice House' in the little town we bought supplies in. It's just so much easier keepin' our perishables cold today. Ice cake...it would work!

That picture is just perfection sweetie!

God bless and enjoy this weekend!!!

Did the ice last through the whole summer, in the ice house? That is interesting about how he cut and sold the chunks of ice.

Your photos are quite beautiful! American ingenuity and rugged individualism is what made this country great...but I would not want to be the one chopping ice out of the lake! Great story and reminder of how far we have come.

And to think the Amish still do this over here ! I saw them not long ago with ice blocks loading them into a small shed ! Yes we do take all the little things we have now a days for granted like Ice cubes in the tray ! Great post and photos ! Have a good day !

I have some very early memories of a real icebox, with ice in it. What seemed normal then is a good story today! Love the word pictures.

What a beautiful sunset! Yes, we are blessed indeed to live at this time in history and in this wonderful country. Not all people on earth are as fortunate as we are.

Ya, I remember putting up Ice. Since we were farmers we had to do all the work ourselves. It was certainly a different technology. What a difference today!

I don't remember ever seeing an ice house, but I knew of them. Just thinking about the old metal ice trays we used to use makes me cringe. It was like scratching a chalkboard for me! I hated those things. :)
Great post!

Just imagine a time when ice was a luxury! It still is in many hot countries.

Wonderful history. I love the magic of electric ice but do have the stories of ice houses and ice boxes.

My grandfather delivered ice blocks to homes. The ice he delivered came from an old ice house. After reading this, I wonder where the ice house got the ice from in the first place. It never occurred to me that it might come from a lake. Interesting.