I learned to play “Hockey” back in 2005 when I was just one year old.  The Grandgirls and their friends taught me the game in their garage in Nebraska.  They played with a tennis ball. 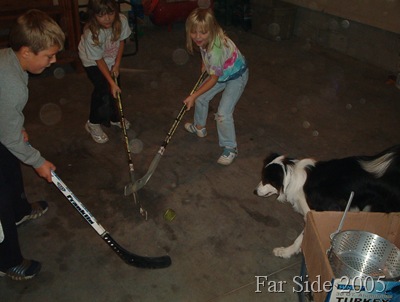 My position was mobile goalie, if the ball ended up under something or back in a corner..I was off like a flash to retrieve it.  I would bring it back into play by dropping it where the kids were waiting with their sticks ready for the face off. One Christmas I played so hard..I injured the pads on my feet..I was a pathetic mess..sometimes Border Collies don’t know enough to quit.  By the time I started to limp it was too late..and I was out of action for awhile..restricted to grassy areas only. Far Side can be real bossy sometimes.

This year I got a new hockey stick for Christmas..from the Grandgirls..now I have two sticks.  Just incase more than one child wants to play at a time..which is a very good possibility!

Far Guy and I play hockey..

I drop the ball near his stick.  This was last Thursday December 30, 2010..before the big blizzard. We have lots more snow now! 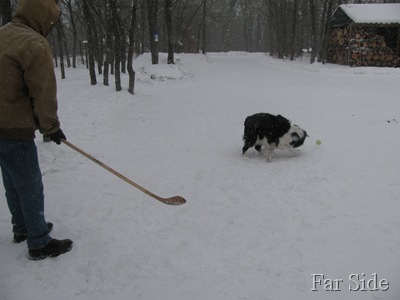 Far Guy tries to get the ball past me..sometimes he does.  Most of the time I am victorious..but I have to let him sneak a shot past me every once in awhile or he gets bored. 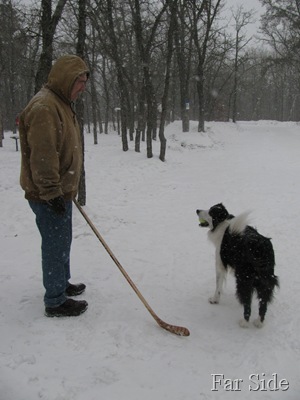 Didja know that Far Guy and I are best friends? 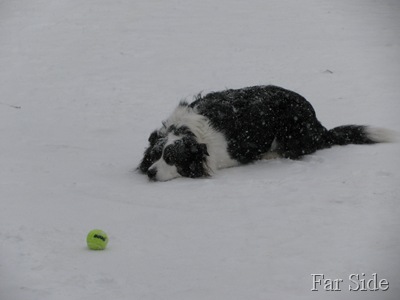 I wait patiently for someone to get the message that I need to play ball and run some of my Border Collie energy off.

Far Side does not usually play Hockey..even though girls can play.  Sometimes she can be persuaded to go outside with me after dark and play regular ball with me.. I put my head in her lap and sigh..she gets the message…if that doesn’t work..a short little whine makes me sound pathetic and gets a reaction. She usually says “Chance go wait by the door..I will be along shortly.”  Then if I think it has been too long of a wait..one little yip will get her attention.   She is getting really good at lobbing the ball in the air with her left hand..it was hard for her to throw anything with her right hand after the dumb thumb surgery:)

Chance, you are very lucky to have Far Side and Far Guy to play hockey and ball with. Glad you have a big space to run and play in but I know you wish you did not have so much snow! If Harriet played ball, she would serve as a base - she never moves, just stands there!

Sooo cute ! I remember the days were dad would make a skating rink for me in the yard of our farm, my brother and I played hockey on it , from that I played hockey on a local team and figure skated as well ! Great post, thanx for the memories! Have a great day !

Chance you need to come over and play with Kit in the other goal...........shes good too. We nicknamed her the Kipper after the Calgary Flames goalie.

Now I understand why Chance got hockey sticks for Christmas!! LOL! ;)

Chance you would be an excellent addition to the NHL. I am sure you would be a big hit at the hockey games and with your talent your team would be assured of a win.
You and Far Guy may be best friends, but I know for a fact how much Far Side adores you too. I think you are one lucky pup to have two best friends.

Just look at the fun your havin' with the 'littles' you hockey champ you! It's great to have a best bud but don't forget the hand that feed ya...bum thumb and all.

Have a bowl full of kibbles and fun playin' with your tennis balls!!!

Wow, Chance, every time I learn about something else you do that other mortal doggies can't do! This one sure sounds like fun. Guess Far Side's thumb must be getting better every day... right?

Chance, you remind me of a couple of Border Collies I live with...play, play!

Does anyone keep score during your hockey games? When you go outside at night to play 'regular ball', do you do it in a lighted area so you don't get hurt because you couldn't see well? By nighttime, I don't have any more energy to play games so it is good you live with Far Side!

Chance, you brought back memories of our black lab Echo that was the most awesome hockey player. She and David, when he was little, used to play all the time.
I'm sure Jake and Luna would play too, I'll have to check around and see if we have any hockey sticks.

How fun! I always knew you were special :)
That takes real talent my friend.
How is Far Side's hand today? Did the stitches come out?

Chance is so athletic. Give Far Side's thumb a lick and give her a hug from me. Thanks.

Boy howdy that is true of you Border Collies not knowing when to quit. Ratters are close behind (Martin is watching me type this so...) And both are champion beggers for play time. Patty (BC)is champion begger for attention of any sort and doesn't understand visitors that can ignore dogs. Fluffy's (dog of unknown origin) extent of exertion is chasing potential bad guys or begging treats off of the guys that come in the delivery trucks or meter readers. They've trained him to be agressive with cars and trucks because they throw treats to him. Some of the guys must really like him because I've watched as they have sat in my driveway throwing no less that ten treats, one at a time, at him. One would do.

He doesn't do much beyond greeting, mostly he just lounges on the screen porch.

Once people arrive Patty and the Ratters would appreciate a bit more action out of folks. Mike obliges Martin but he isn't much into the others. The hockey stick and tennis ball looks like it would be a great game for the more active dogs around here. I may have to keep my eye out for some to keep around.

Ah, you and your dog have a good understanding of each other.